Back in the original Mudspike review, I was always amazed that the throttle’s thumb red ‘nipple’ didn’t act like an analog set of axes, but rather as something that needed the Saitek software to bind as keys with thresholds. It’s really loose and feels like it should be analog.

Apparently there was a way to fix that, using some registry keys. Here’s the steps:

It should all look like this (i.e. double check your value on the right, and the path at the bottom): 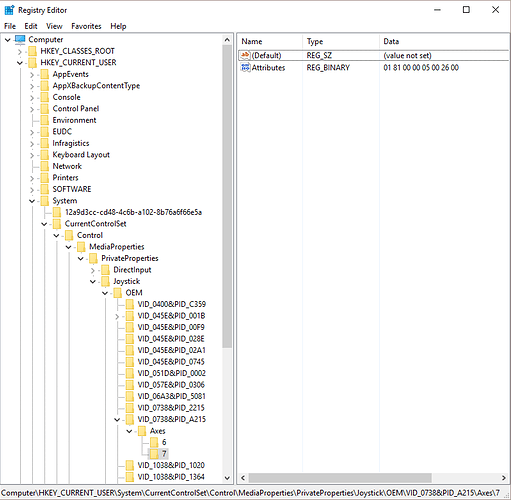 You now have an extra set of JOY_SLIDER1 and JOY_SLIDER2 on the X-55 Throttle mappings. Unfortunately the wee red nipple is not great to use, and only offers about 16-steps (slow/fast 8-way) but it does mean you can use it without the Mad Catz profiles and natively within games.

Note: You may have to ‘Inverse Axis’ on the X axis in sim/game.

PS Hmm, maybe it is time to add a ‘Hardware’ sub-forum? What do you think?

I’m all for a hardware subforum. sticks and pedals are often discussed and it would be nice to have a place for discussion once the VR market really starts competing.

The moment I opened the box for my X-55 I realised relying on that nipple in one form or another would probably only cause frustration. So I never used it. I use those 4-ways for the thumb on the throttle for slewing. I have a modifier, something like RCTRL, on the sliderswitch that I use as a modifier to essentially “double” the amount of 4-ways I have on the throttle and stick. The only thing I would have REALLY wanted would be a proper CMS 4-way instead of that dumb button

I wonder what you use the nipple for? I envisionaged it would be cool to use for the sight to control the missiles on the gazelle ( I actually even asked poly if you would be able to when they did their stream, and iirc they answered positively ) so you just helped me with the technical side of things of that dream

I wonder what you use the nipple for?

I came from a broken Warthog, so for me and the A-10C, the nipple was always the SPI cursor under the TMS four-way. It works ‘ok’ for this but not great. I agree that the CMS looking like a CMS but just being a plain button is really annoying, it’s like they teased us

PS Hmm, maybe it is time to add a ‘Hardware’ sub-forum? What do you think?

I wonder if you are still contemplating making this? I’d like it. And I think there’s plenty of upcoming material ranging from the new GPU’s to VR goggles to flight sims specific gear that we could discuss there.

I’d still like to. The reticence is really only if it will get used enough, so we don’t end up with any ghost subs.

The forum software also has some awesome Q&A and ‘solved’ support, so I’d be keen to enable that, e.g. Q. How do I stop this crash? A. Answer here [solved].

@BeachAV8R, @EinsteinEP and other regulars, what do you think? It could include VR, hardware, graphics and tech help stuff too.

well, out of the top 12 topics in hangar flying right now, wich are as many as can fit on this laptop screen, 6 of them are about hardware. The Q&A assistance stuff sounds cool. If it turns out to be handy it could perhaps migrate over to other sections sections as well like flight sims. If it turns out be not a succes I suppose you could always kill it?

Let’s hear what the fellows have to say.

A hardware forum sounds like a good idea! I’d want to understand the Q&A/solved features a bit more before we implement it, but there might be some value there too!

Yep, on it. Just reticulating the splines in preparation, will be tonight.

Also - when it appears, anyone at the ‘Regular’ user level can help re-categorize topics, which means if you see an old Hanger Flying post that should now live in Hardware then please feel free to press the ‘edit’ spanner icon at the top and change it. Cheers!

Ok, moved a bunch - remember, if you see any more then please recategorize if you can. Cheers!