Wowza… Talk about ‘one of those days’…

Yikes. Probably a write off on an old airframe?

“T’is just a scratch. Come back you fairy!”

Probably a write off on an old airframe?

That’d be a write off for even a NEW airframe. Buckled in the middle…probably wing spar damage. That is a BAD day…

That’s a write off for a NEW airframe. Buckled in the middle…probably wing spar damage. That is a BAD day…

Oh yeah, i missed the warped fuselage completely. Though it was “just” the engines + mounts.

Yeah… I try to imagine the forces that could cause something to buckle like that…having flown through moderate and nibbled up to severe turbulence before, and to bend stuff and break it must have been a violent ride in the cockpit. Although it can be said that a lot of structures are weak in areas where forces are not expected to be applied in the wrong direction. So what might be strong in one way…isn’t in another.

As for the engines. I’m not sure how rehabilitatable engines are that get bent up and FOD’d like that. @TheAlmightySnark might have some insight on that. I mean, a lot of dirt, rocks, metal going through there means that you’d have to be very particularly about what parts you kept or were deemed serviceable. I’d imagine you’d have to NDI a ton of them to allow them to be returned to service.

Just a basic, overall mess that probably could have been avoided. I haven’t read the initial details. I’m sure I’ll be sad when I do. And then knock on wood.

The 747 is a 4-engine aircraft right? Or is it just me. Some of the local news have been commenting on how the engines were still attached to the plane but I seem to remember that model having 4.

Ouch!
Yeah that one is probably totalled.

The 747 in question is sitting in a ‘depression’. Just behind it, where the fire-truck is in the following link, is a few meters above where it is sitting now. My guess is that it was slow enough to be half on that lip when the nose came forward and re-impacted the ground, causing the buckle in the middle. 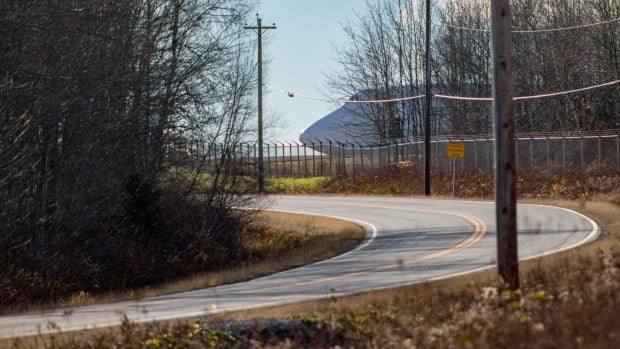 The cargo plane was arriving at Halifax Stanfield International Airport from Chicago when it went off the end of the runway, stopping just 50 metres from a fence separating the airfield from a public road. 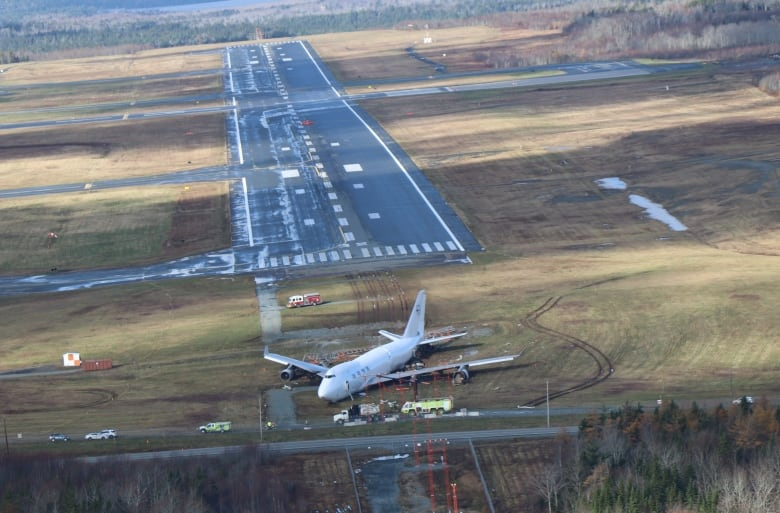 Just another note. The alternate runway is the one going perpendicular to this one, starting on the right of the above picture and going off to the left for 10k ft but it does not have ILS and has been shortened to 8700 ft due to construction. This was the only precision approach that was available at the time.

I don’t know what the calculated landing distance was…but 8,700’ does seem doable for landing anyway. Looking at that photo above…there is an awful lot of standing water around…so I wonder what the runway condition was when they touched down. It doesn’t take long for factors to become additive to the point you have an overrun. A bit too high, a bit too long, Vref + too many, tailwind, delayed touchdown, delayed onset of full braking and reverse, hydroplaning… Sometimes you only have to get one or two out of that list to have a Very Bad Day ™

“…they decided to land RWY14 with wind reported as 280/18G21 and ATC questioning their intentions. That equates to a tailwind of around 16 knots. On a 2350 meter runway that was wet…”

Holy ■■■■, that’s way more then some skin buckling, the supports that run through the airplane have been heavily damaged. That fuselage looks like a write off.

Engine wise, two of em are completely gone so probably did some serious tumbling on the ground as they took the flaps with em. What I can see from the outboard engines that are still attached…

Well boy, that’s not a pretty picture. So, the cowlings are a write off too. That includes the thrust reverse system that is attached to the aircraft(blocker doors kind of thing). Then you’ve got the fan section, you got to overhaul the blades and rebalance them, expect a good chunk of em to be written off too. The containment section is damaged beyond repair(dug into the ground, engine rests on them). Then you can bet a lot of gunk got sucked in. Not a bad thing no it’s own, they constantly suck in dirt and birds without problem on most days. You just need to thoroughly inspect and clean them. Then you can expect the flanges that connect the main modules to have sustained some damage, you wanna check your core on warping, if not revising it completely. Not sure were PW puts the AGB but that ought to be relatively easy to fix.

Honestly, it’s going to be a write off and split off for parts. It’s a 20 year old airframe. Probably going to be an insurance thing too and the engines are leased from some sort of disturbing financing structure so you can bet someone is going to make bank on this incident.

According to a preliminary TSB page, the aircraft was empty at the time.

The 747 in question is sitting in a ‘depression’.

Well yeah! If I were that damaged I’d be pretty depressed too.

Then there is this from the ATC transcript:

That’s pretty much letting the cat out of the bag…if he had just asked for a tow to the gate…or maybe just said “Um…we’re going to park it here…thanks for the help.” nobody would have noticed.

BTW, do any Mudspiker’s have dibs on the cockpit yet? Might fit in my driveway.

“SkyCube”?? I thought that was the callsign for the Borg.

“Resistance is futile.”…and evidently so was brakes, spoilers and reverse thrust…just say’n