Setting up a Benchmark for DCS

I think we need something to compare our rigs!
We need to know better how DCS stress our computers and what to buy to improve our experience!

chiliwili69 made a wonderful work for Il2 Box

Note: Full procedure below With the arrival of VR it is very important to be as close as possible to the 90fps, there are plenty of parameters to tune that affects the game performance (Supersampling, Low-Med-High-Ultra, Sharpen, AA filters, etc)....

why don’t we make something similar for DCS

I’m thinking on a heavy track to be run with a plane and map that everybody have. So i would say p51 on Caucasus…

The way this needs to be done is by creating a replay track that we can all play back in DCS and record the results in something like MSI Afterburner. We don’t need to use any specific plane but the Caucasus map would be the best since it’s free.

Creating a good replay track for this isn’t as easy as it sounds because many things cause DCS to stutter and will mess up the results. The other problem I’m fighting is the replay system itself. I will create the perfect track but when I replay it something get’s messed up. The replay system in DCS has been broken forever but apparently not high on the priority list for ED to fix it.

Once we have a good reply track for benchmark testing I think we should go to the ED forums with it. More people there will be interested in testing and are familiar with how to use MSI Afterburner to capture results.

Creating a good replay track for this isn’t as easy as it sounds because many things cause DCS to stutter and will mess up the results. The other problem I’m fighting is the replay system itself.

and having testers flying trough it?
maybe using the virtual rings to force them flying trough?
or just asking for level flying looking just ahead for 120 seconds?
or a voice text asking to look 9 oclok
then 3 o clock
and then straight?

the il2 test was flown with the VR headset in a fixed postition.
But also tracking the head can induce some lag on lower end systems
having the tester perform a lookout should be better…

It’s a noble endeavor, but there’s a lot of variables, and they change quite a lot as well:

I don’t want to be discouraging as this is a good idea, but it is currently just a really large moving target to make good comparisons in this way. A decent way to track performance is through guides like this:

So 2.5 is here, in beta anyway, and everyone wants to jump in and blow stuff up. But it is not the same engine as 1.5.8, and the Caucasus map is certainly not Nevada even if you are coming from 2.2. With all the new features there are new impacts on...

It’s not ideal because it is less ‘compare A to B’ but it is still useful.

Ideally an in-built benchmark will one day exist, using a ‘non inputs’ track way and a set config to ‘score’, but I’d imagine that’s not coming soon.

I think we need something to compare our rigs!

Mine is black with red and blue lights…I win.

Mine is black with red and blue lights…I win.

I have the same. So tie.

@fearlessfrog pretty much nailed it. If DCS had a built-in benchmarking tool that would be one thing. If we try to do it on our own then we have to get everyone who runs it to follow very specific instructions which is well… difficult.

People have to post screenshots of their settings, capture results in something like Afterburner, state their system specs, and then post it all on the forum. That’s a lot to ask of people.

The one thing that would be nice about this is it would help to confirm some issues like frametime spikes and stutters. I’d like to see that other people are having the same issues as me so I can be confident it’s not just some hardware or settings issue on my end.

I created a couple of replay tracks that purposely stress the gpu. I made two tracks, one with clouds and one without. The tracks have 5 parts that hit system resources hard in DCS-

This is what I would expect from people running the benchmark track when posting their results. I’m not going to explain step-by-step how to setup/use MSI Afterburner. I know there are people here that know how to use it. 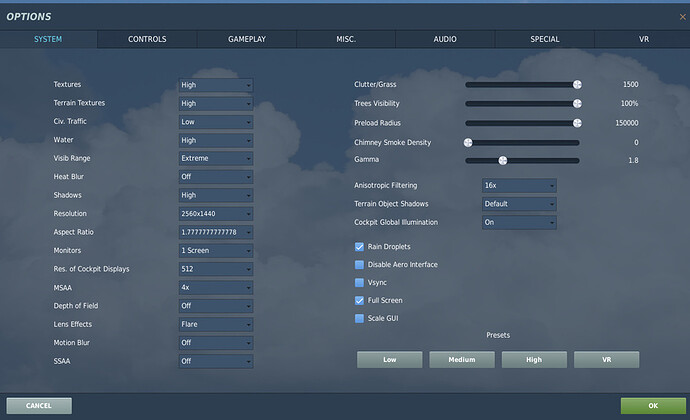 My results for “Cs_Benchmark_no_clouds.trk” **with 60 FPS framerate limit in place 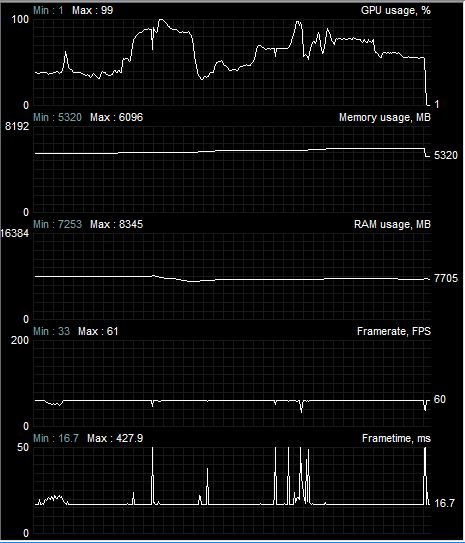 I attached the two benchmarking tracks I created for everyone to check out. I’d love to see some results from others if anyone is willing to play along.
Cs_Benchmark_heavy_clouds.trk (64.1 KB)
Cs_Benchmark_no_clouds.trk (65.8 KB)