So another straw poll so to speak

So since that last one only confirmed what I already thought, how many of us are motorcycle fans? I don’t mean I used to ride a dirt bike back when “On any Sunday” was current - I mean NOW.

But surely somebody else over here has the bug as well?

I probably am done for good on my Daytona 675 as far as riding on the streets goes but I’m addicted to my other bikes- they range from a YZ125 to a Scrambler 1200 XE. I’m keeping my Daytona as I have all the neato Carbon Kevlar fairings for her but I’m afraid it’s going to be track only as after my wreck I’m spooked a bit for Sport Bikes.

But speaking of Scrambler, that’s the bike I traded my Wife’s Tiger in for as it was just making me cry anyways. So in the spirit of turn the frown upside down I traded it for a green Scrambler that I spent ten minutes staring at the shocks on whilst on Matilda, my Tiger at the Dealership getting parts. So I’ve put close to ten thousand on it since mid-April when I got it- think I like the bike? I sometimes wonder if I shouldn’t have traded in Matilda when I got Prudence but since I love my rain rides and my Interstate runs I kept it. Plus the fact that she looks like Vader’s own Purple bagger dirt bike is still kinda cool- I like the looks it gets from the snapback kiddies in particular up in the pineys. I had to re-spray the bike from its’ original black to PPG’s Dark Shadows Blue as I’d gotten stupid with the labels and I wanted something a “bit” different without being too over the top.

Her Majesty Prudence the Bonneville is something quite special though, and needs very little by way of accouterments to enhance her appearance. I merely added a few readily available items with a more “Euro-centric” theme to them but to bag it up or try to turn it into an “ADV” type bike seems ridiculous to me. I have a poster of Steve McQueen on the wall of my garage in a place of honor next to the one of Ann Margret on a Tiger (bought since Mama died) and I’d like to think that either he OR Bud Ekins would understand that bike and what I’m trying to do with mine. Hell, so would Ann Margret herself- she’s a motorcyclist and knew how to ride the little Tiger she was pictured on way back then before or right near when I was born.![IMG_3625|375x500]

Haven’t rode in decades but that is a nice bike.
I didn’t know if you broke the image link on accident or on purpose so I left it hidden.

Screwed up the inline uploader- I’l re-try when I 'm not stupid. But fairly bog-standard Scrambler 1200XE in green and fusion white with a “few” non-US bits before the clampdown hit like the high-mount fender and a rather pretty vs. functional tank bag protecter in leather from Italy.

Yeah I used to joke with the Wife that I’ve got Hinckley West out there in regards to the “british” bikes. Triumphvs Rex out in the shop. But still outweighed in sheer volume by the Japanese. 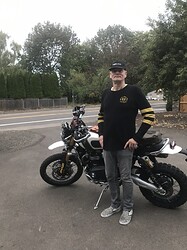 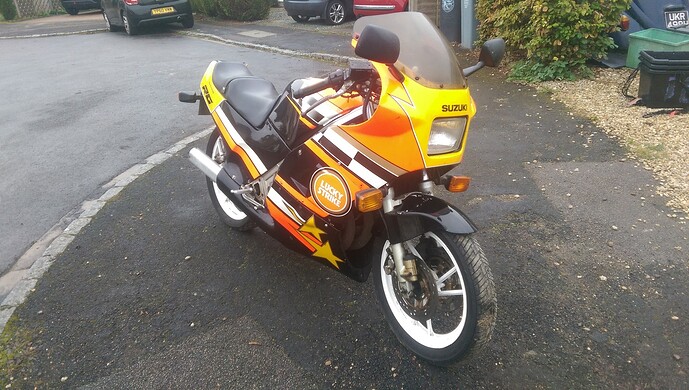 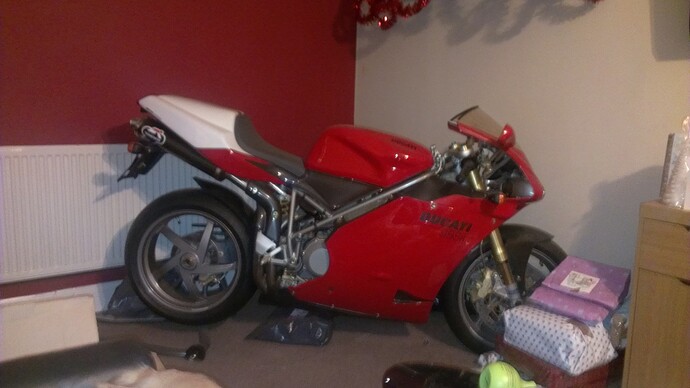 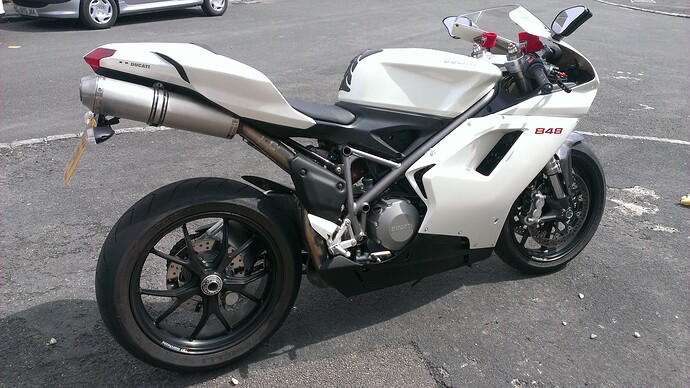 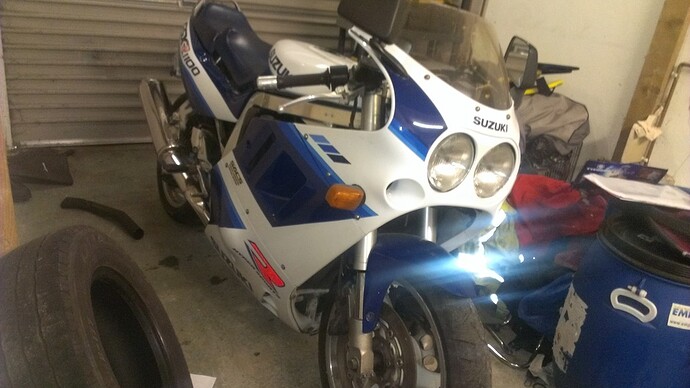 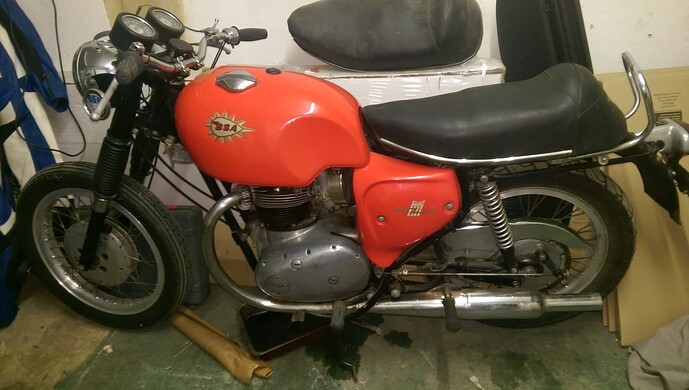 Screwed up the inline uploader

It’s an easy fix. All you did was accidentally separate part of the code. If you remove the space the picture will show properly.

Victork2 made the same error with a couple of his pics.
This:

![IMAG2112|689x390] (upload://sdZYaRxoT7iAFefEnzWjMIxxYcZ.jpeg)
Notice the space between the bracket and the parenthesis.

Don’t let the red text fool you. It is correct but for some reason the code box is placing a space between the exclamation point and the bracket that is not there.

And here is the picture.

Mine does that sometimes when I use firefox mobile and try to upload more than 2 or 3 pics. Its odd

Back in the day, I had a '99 CBR 600F4 - loved that little bike, and thankfully I was just mature enough to not get into trouble on it.

Went househunting in San Diego before we moved homeports, and realized I would die if I brought the bike with me, so I wisely sold it before moving.

Someday, when I have a garage and a job that gets annual payraises, I’ll pick up a Ducati.

I rode street and dirt bikes for over 40 years, had a lot of great ones and took some fantastic trips. But am taking a break until we get the kids through college. Financial and longevity concerns (my number has to be coming up soon

) keep me off of the things for now. @Navynuke99, I hope that get your Duc. I’ve owned 2 and loved every minute. Well except for trips to the shop for valve adjustments, which were dear. They have longer service intervals now.

You guys ride on!

Nice looking 998 @Victork2. That was always one of my favorite designs.

Thanks @chipwich I’ve had it since 2002 when my dad died I bought it as a gift to myself. Been in my living room ever since. It’s such a beautiful machine. It’s an R version as well so it’s got some gorgeous trick bits on it and its covered in carbon fibre. I’ll never sell it

NavyNuke- Hey it’s good to see you here! My Son has my old Fireblade 929 in Yellow and Black that looks a LOT like the CBR . His MOTHER made me give it to him a few years ago for Christmas when I finally got the little (FAR more appropriate) Daytona 675. Neither one of us ride those crotch rockets on the street much after the accident - he’s looking to sell it and my Daytona is sitting on the bench waiting for me to get off my butt and fit a set of Sebimoto Carbon/Kevlar race fairings, Helibars and the rest of her trackday bits- it’s probably NEVER going on the road again as it’s one of the first things I thought of that fateful day on the side of the road after the accident I lost my Wife in.

Wheelsup- Thanks so much. I’ll refer back to that frequently I’m sure as I’m still trying to come to grips with technology even after I’ve helped kick it in the arse so to speak for well over 20 years. Recognize your name as well I do- Thank you from the bottom of my heart for Mission4today- it has saved me many an hour of otherwise boredom and/or frustration coming to grips with IL-2 over the years. Haven’t been in forever due to time constraints and such but thank you again.

Vicktork2- The BSA pic just says it all really, doesn’t it? Pan of slowly collecting oil under the patina of priceless Limey bike wearing a paint shade that hasn’t been fashionable since Summer of '74 or so. What a WONDERFUL bike! If you love British bikes you love them warts and all, it’s what gives them character. When I got into motorcycling again after a long absence I of course did the ADV thing but the British bikes just stood out from the usual Gelandestrasse poseurs in more than just looks. I bought my Tiger without even a demo ride figuring quite rightly that it was more than likely a FAR better motorcycle than I was a motorcyclist (it was) and that I would just grow into it (I did). I had far too many unreasonable expectations of both myself and the bike which led to more than one incident of “advanced learning” shall we say? At any rate learn I did and I and the bike are still relatively in one piece each, collectively. But as I say she started a general trend of “Britishness” in my garage and there are now three Triumphs to two Yamahas, a Kwaka a Suzuki and the aforementioned Fireblade. Quite the Tribe and I’m looking forward to it’s evolvement over the next few years.

One of these years- when I hit the Lottery or something, I’d LOVE to get my hands on a Meriden Triumph Trident. A bike I wouldn’t have looked at twice back in the day, it was BARELY competent to operate, hideously expensive and had lackluster performance to boot.

But it was the Harbinger of the salvation of Triumph, even if no-one capitalized on it at the time. It possessed ONE of the three things necessary for Triumph to come back from the Dead, a triple. The other two being John Bloor and suckers like me to buy the filthy bikes here in the US again. As Triumph has seen a resurgence in recent years in spite of generally negative outlooks in the Motorcycle industry in general I’d say they are onto something. We’ll see if Ewan and Charley’s latest shenanigans ( ooh, they’re in South America right now) will help Harley sell what even they are admitting is a Halo bike in the Livewire.