I need to start a separate thread too about SRS. I had it installed and was listening to it tonight…sounded kind of neat…but not sure if it can run in parallel with Discord or as a replacement…and can you and friends just find an empty frequency to chat on among your flight? So many questions.

Can run in parallel with Discord.
Can use any frequency you like, intra-flight comms is a good idea.

parallel is fine, yes. The modern planes that have multiple radios allow you to be on an intra-flight and a global mission (or AWACS or Tanker) channel at the same time. So on servers that support SRS like HPN/GAW/PGAW/SAW you can listen to the global state of things on UHF usually, and talk with your buddies via the VHF.

SRS is amazing. You can have a laugh with buddies on Discord and remain in mission-focused mode in SRS. A lot of servers now post VHF, UHF and FM for different ops. You can listen to helicopters on FM and stay in the jet loop on UHF. There is even an overlay that works in VR so you can see on which of the three freqs the audio you are hearing is coming from. That same overlay does the same for you in that with just a glance you can confirm which freq your mic is pushed to.

But wait there’s more! Some servers now, both DCS and IL2, allow for scripted, triggered audio. For instance, on the DCS “Rotorheads” server you get a launch warning and a clock direction whenever an Igla throws a stick your way. Is that realistic? I say “YES!” because in the real world you would probably have a buddy in combat spread with you watching your six.

SRS deserves it’s own thread so thanks for starting one. They also have a discord channel that in my experience has yielded answers to questions within minutes.

but not sure if it can run in parallel with Discord

Just use different PTT for each

I am happy to post my setup with pictures if it helps but can’t do it atm.

I do have an idea for some multiplayer inaction if anyone cares to join. The Search and Rescue server on DCS is more relaxing than exciting. Players within a group can flying together to sites with multiple victims and laugh at each other’s growing frustration as they alternate pickups. I’ll be around much of today (Sunday) on Discord if anyone cares to join up.

My stepson is about. I might use it to introduce him to dcs helicopters. He is a RN observer Lt Cdr. Flies Merlins on Queen Elizabeth.

I will hop on this afternoon. We already did one soccer game (3-3 tie!) and have another at 1PM (Eastern) unless that frontal weather shuts it down. So later in the afternoon I hope to be able to join in…

I am on the Mudspike Discord now flying X-Plane. As soon as someone wants to fly I’ll pop onto DCS.

Does anyone have any insight on using SRS with Vaicom? I’m having trouble following the manual section that deals with switching, and I hate the idea of having 4+4 separate PTT buttons for AI and VOIP. Maybe a modifier button I guess…

Sorry, I don’t use Viacom. This is how I have mine setup: 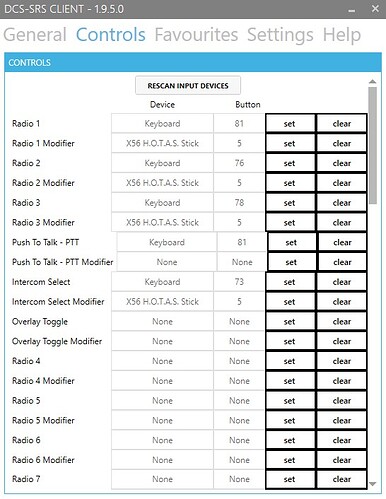 I am using the pinky on my X56 stick as the modifier. (it serves the same function within DCS as well.) 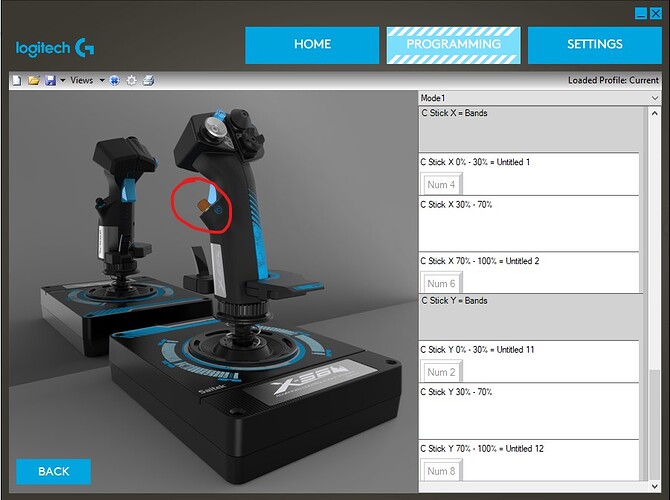 The circled ministick is an axis I wouldn’t otherwise use. The Logitech software allows any axis to be converted to “bands”. Each of the 4 new bands is now assigned a cardinal key from the number pad. By using the pinky modifier pb on the stick (“5” on the first screenshot) I can quickly change between frequencies and transmit on that frequency at the same instant. Or, if I simply wish to transmit on the selected frequency without changing radios, I just push forward on the little ministick which is the same as typing “2” on the numpad–assigned PTT in SRS (note in the 1st screen that I assigned this key without the modifier). With this setup I can still use aft stick (numpad 8) as PTT on Teamspeak. Although it’s been many months since I’ve done this. Discord works great with just a hot mic.

Cool, thanks for the explanation. I don’t know why I never thought to use a modifier before I typed that… now I’m out on the road a couple days, I’ll have to remember to set that up when I get home.

I have a pair of thrustmaster MFD’s and use the GAIN rockers to PTT in SRS.

Warping, I’m in the same boat. It doesn’t look too difficult, but I haven’t tested it yet. What time zone are you in?

I’m CDT, -5 Zulu. Unfortunately I’m out on a trip and won’t be home for a few days. I’ll check out that video though, thanks!

I’ll check out that video though, thanks!

It looks like he’s not using VAICOM though. I bet VAICOM has SRS commands in the word list. Will check tonight and report back.

Does not. Many options and as you said, somewhat confusing.