Seeing them move so slowly…I was reminded of…

Apparently the porgs were put in because they had to do something with the puffins that they could not keep out of shot when they were filming on the island.

Read something about the “bombing run” took inspiration from 12 o’clock high.

Other than some cool visuals I didn’t really like anything about this one. I didn’t think the story telling could get any lazier than TFA, I was wrong. I’ve developed exactly zero connection with any of the new characters at this point. I understand that they are all hopped up to have the torched passed to these new actors, but if you to ask me to describe either of the new trilogy movies out it would be a simple, The one where Han dies and the one where Luke dies.

I didn’t think anyone could make me not care about Star Wars, I was wrong for a second time. When Luke went poof it had no impact on me because the portrayal of him was so off kilter that it didn’t even seem like him. Might as well be a totally unknown jedi.

Also, the oddest thing is if this is supposed to be baton passing, they’ve now wasted 2 of the 3 films on that. I’ve still zero connection to any of the characters, I’m confused as to the whole Kylo Ren baddest badass ever thing. Finn seemed like the only one coming out of the TFA that had any real character development and they just killed that by trying to make him run again, then sending him on a pointless mission. Total garbage.

I wish I could give them credit for some differing force stuff, but even that was just cherry picking select things from the EU. The real question I can’t seem to answer though is why the heck did I have to watch a shot of Luke milking a cow lama’s boob?

The real question I can’t seem to answer though is why the heck did I have to watch a shot of Luke milking a cow lama’s boob?

Because blue milk. You know, to appeal to the A New Hope purists?

but wasn’t the milk actually green from that thing?

Was it? I couldn’t tell. Saw it in 3D and it looked blue-ish, but you know how some of those colors get funny wit hthe 3D glasses on.

but wasn’t the milk actually green from that thing?

well i just learned something new 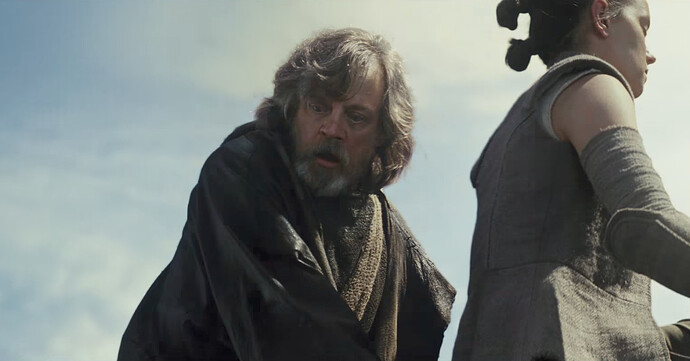 Turns out, Luke isn’t as alone as he thinks

My favorite scene was probably when the tie fighters were chasing the falcon and the Chewie took it low level through a canyon or cave or some thing, yanking and banking, with one of the old songs playing.

Darths and Droids is just epic!

Oh another weird thing I noticed:
Leia went from her sick bay gown to fully dressed wearing jewelry and a fancy hair style in just a few minutes I think. During a battle.
Either she used the Force to dress or that is another case of Star Wars just ignoring physics.

It didn’t really bother me, it was just funny.

More likely they cut the “Leia went into the other room to get dressed” scene for time.

It’s the first Star Wars movie I’ve seen in a theater that left me fundamentally unhappy.

It’s not baaad bad, just… not that good.
First- it was a collage of pieces of “Empire Strikes Back” and “Return of the Jedi” with details changed, James Bond flavor thrown in for good measure, total disregard for the most basic Miltiary Tactics (the Empi… ehrm the FIrst Order throw in the fight like twenty Tie Figthers in total in the whole movie?, you argue over the radio with a single fighter? SHOOT IT ASAP!), and the WTF gold medal… ARCING LASER GUNFIRE!

I’m really sorry about this, as some parts were actually good even if there were too many funny parts… it felt a bit too much “Space Balls”.

I guess “Rogue One” ruined the rest of the franchise for me.
That’s the sort of Star Wars feel for me.

Totally agree that of Rouge One didn’t exist I would probably have liked this movie more.

Yup, I feel the exact same way, Spaceballs humor, not Starwars charm. It was entertaining, I guess.

I have much more hope in the side stories than the main episodes after Rogue One. I think they’ll be a lot more original and probably won’t have as much influence from producers, special interests, etc. I’ve seen some talk about an Obi Wan side story between episode 3 and 4, that could be cool. I’ve always wanted to see a Kyle Katarn storyline though.

It wasn’t for me.

Can i just say one thing. For the love of god, could sci fi please stop invoking JJ Abrams to destroy almost every scene’s cohesion and the standard crap that he puts into every movie.

There were more stupid holes in this movie than moon landing conspiracy theories.

Star Wars has always been full of plot holes so thats perfectly in line with the franchise.

For me Rogue One is not the direction to go. I didn’t hate it but… for me the characters were rather poor and it was full of bad decisions. Like the Leia scene for example. And trying too hard to be dark.
Not bad per se, but… meh. IMO even EP7 captured the essence of Star Wars better.

I’d like to see Rogue One before the re-shoots. I like what was released, but curiosity has got the better of me with that.

I’ve seen some talk about an Obi Wan side story between episode 3 and 4, that could be cool. I’ve always wanted to see a Kyle Katarn storyline though.

Need a side story about Porkins, lol