AAR from our July 2nd flight on Storm of War, featuring Rob, Mother, Bowsewr and Chuck.

17 June, 1944. D-Day is just behind us, but the war in the West is far from over. Allied forces have secured a beachhead in Normandy, but German forces still control Cherbourg and the majority of the Cotentin Peninsula.

We are assigned to the 336th Fighter Group, which is based in Saint-Pierre-du-Mont. A squadron of P-47 Thunderbolts and a squadron of P-51 Mustangs are both stationed there. 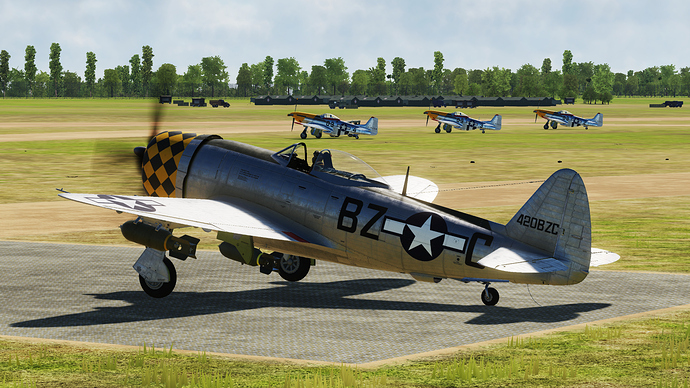 Saint-Pierre-du-Mont has great strategic value at this time since M64 and M65 bombs just got shipped from England, which allows us to support ground troops without having to fly all the way back to Ford or Funtington. Saint-Pierre-du-Mont is one of the only two airfields with that kind of ordnance available, therefore we need to make sure it remains operational. As I fire up my trusty Thunderbolt, Rob, Mother and Bowsewr finish their engine run-up before taxiing to runway 27. We load up bombs and extra fuel in the auxiliary tank.

Our mission is to intercept a few german Schnellboots. According to intelligence reports, the flotilla is following the Cotentin Peninsula and heading North. Armed with this knowledge, we plan our flight accordingly and prepare for a long flight.

As we line up on the runway, we have a grim reminder that fighting is still going in the push towards Cherbourg. From the airfield, smoke columns are visible near Azeville and Sainte-Mère-Église. 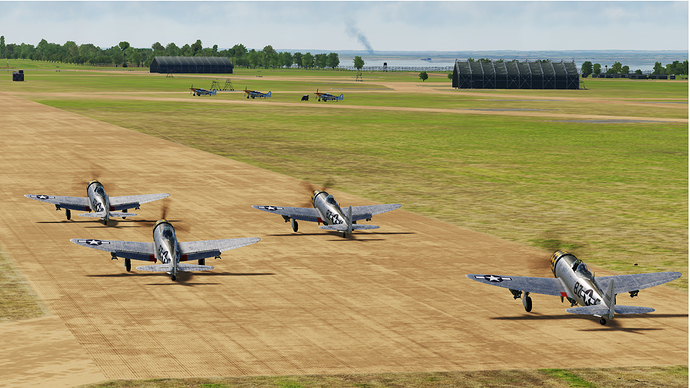 We perform last minute checks (trim, flaps, tailwheel locked, boost off, propeller at max) as radar operators inform us that no air threats are expected in the vicinity. However, we still have an uneasy feeling that this could change at any minute.

We throttle up and depart West towards Utah Beach. We start climbing as fast as we can using the best climb speed (160 mph). Down low, the Jug is a real pig… but up high it is a very potent fighter. 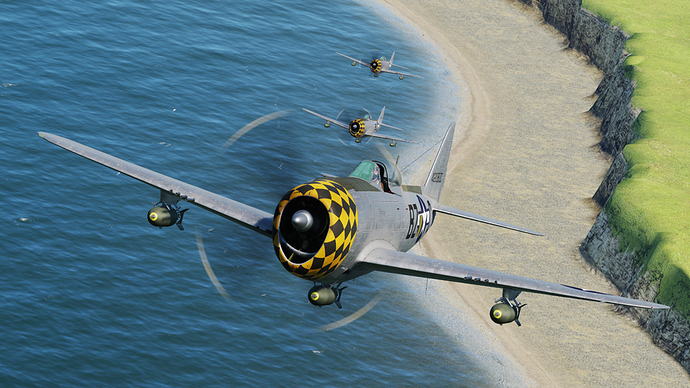 We follow the coast towards Barfleur without seeing any sign of enemy aircraft. As we draw closer to Cherbourg, we realize that cloud cover will make ship spotting a bit difficult. Therefore, we decide to head North towards the Channel to try to find these ships.

After a good half-hour of flying, our auxiliary tanks are drained and we have to switch to the main tank. That still gives us a good 250 gal of fuel, which is more than enough for our mission. 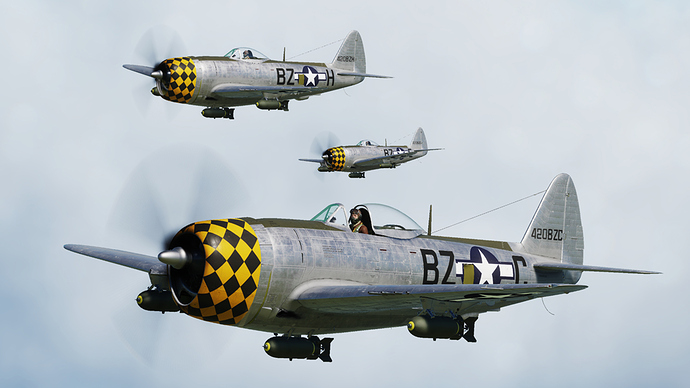 After roughly 20 minutes of flight across the Channel, we still haven’t seen any ship at all. The clouds make our job quite difficult since we can barely keep everyone in visual while flying between the puffy clouds.

We then dive down below the clouds to try to better spot the fleet, and steer South towards Alderney. Once again, no Schnellboots in sight. Could our intel be wrong? 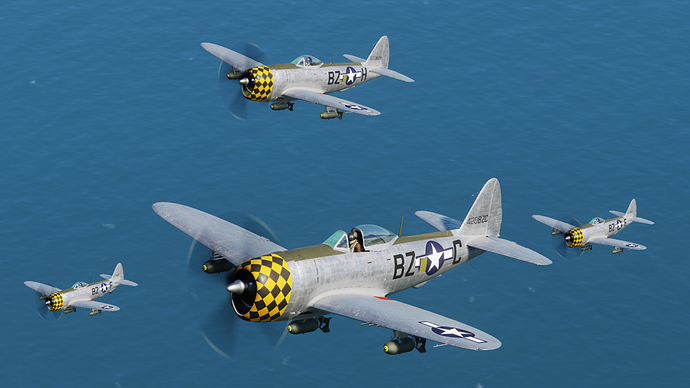 In hindsight, we suspect the flotilla could’ve been sighted much further South towards Granville or Mont Saint-Michel… but instead we elect to turn back towards the coast to strike some ground targets. 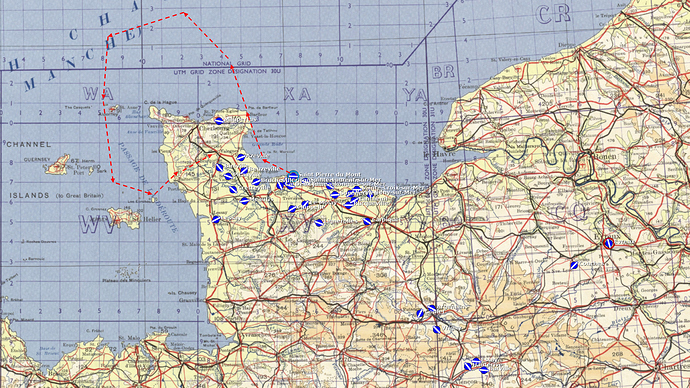 Our alternate target is a Telecommunication Station North-West of Valognes.

Rob’s eagle eye finds the comms centre, and a few minutes later we all start our bombing run.

Rob and I go first, and the first pass completely smashes the communications center. Angry tracers graze us left and right. 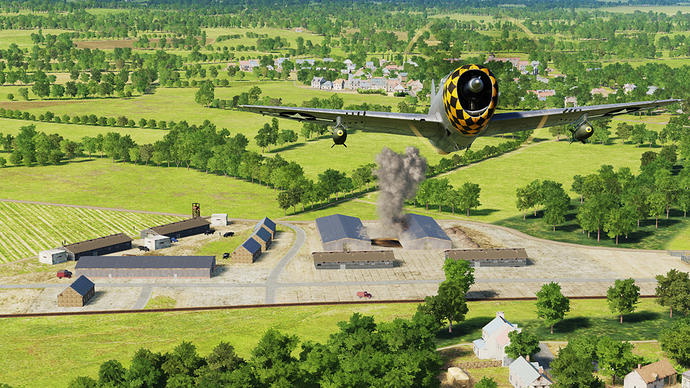 Bowsewr and Mother join the party and we end up busting a few bunkers.

After a few more passes, the whole camp lies in ruins. We then head back to Saint-Pierre-du-Mont for some well earned R&R. Interestingly, what was originally meant to be an anti-shipping mission turned into a very successful air-to-ground strike mission. 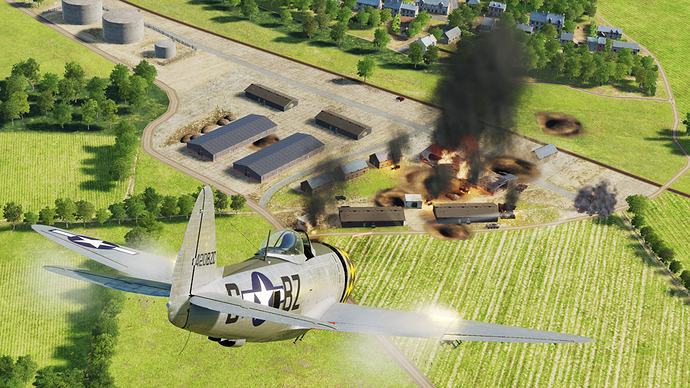 As we line up on the runway, we have a grim reminder that fighting is still going in the push towards Cherbourg. From the airfield, smoke columns are visible near Azeville and Sainte-Mère-Église.

Love that observation. Reminds me of when the Brits could hear the shelling before the the Somme offensive across the channel.

Awesome @Chuck_Owl! I hope that you will post more of these adventures!