10 May 1945
The main German forces surrendered a few days earlier on the Western Front.

Situation: Sark island, one of the English channel islands had been occupied by regular Wehrmacht forces for most of the war. When the regular units evacuated the island to surrender to the Allies, the only remaining German forces were members of the Waffen SS, which arrived from Alderney Island.

A detached unit of the Canadian Royal Winnipeg Rifles, aka the Little Black Devils, was assigned to destroy two enemy fuel resources and to eliminate the command staff at the headquarters in town.

The plan was to approach the town from the south and destroy the easternmost fuel truck. After completion of that objective, the unit was to proceed through town to destroy the second fuel truck located next to the town church. Completing this mission involved north into a leftward flanking maneuver to come at the headquarters from the east. This whole attack profile was known as the Adlabs Dipsy Doddle. 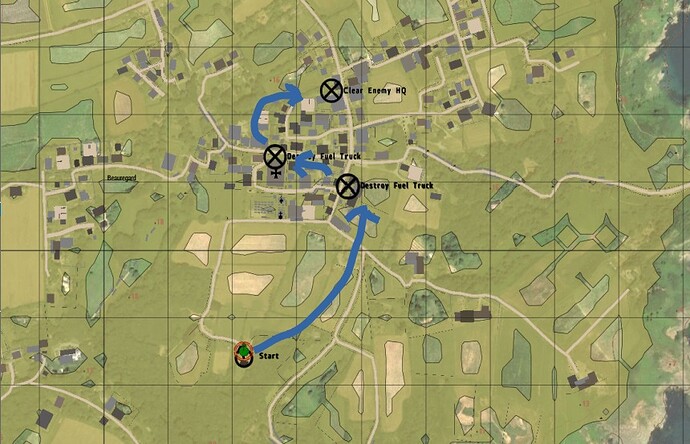 The below shot is Sgt. Adlabs leading the squad across the first road into town. Unbeknownst to him, he passed nearby an outpost located at the T intersection next to the crossing.

Having survived the T-intersection, the group continues to the first objective and then destroys it relatively easily.

After destroying the first fuel truck, the group takes the small alleys and pathways to the next objective, clearing out enemy as they go. They discover that the immobile fuel truck is parked right next to the church. Charges were carefully set to only blow up the truck and not damage the church.

The Adlabs Dipsy Doodle maneuver continued through town and the unit eliminated all enemy resistance that it encountered.

With both fuel trucks destroyed, it was time to focus on the enemy HQ. The unit transferred a few more yards to the north, before turning to an easterly movement. The unit took some time to access the situation before beginning the final assault.

The final assault on the enemy HQ was quick and surgical.

Good show all 'round. Just in time for tea, too!

Wowza. Which mods are you using, guys?

I am getting these mods now Thanks for highlighting them. Is the actual map (Island) a part of the modpack too

What’s going on with iron front these days? Is it just lite now of does the full one still exist?

The island, Sark, is part of the IFA_AIO_LITE mod pack. It contains the Iron Front units, vehicles and islands. Additionally, it contains other maps, mostly ARMA 2 I44 converts. Granted, the maps can look dated at this point.

What we’ve been doing is to use the Faces of War units/weapons, which are good quality and making do with the maps and vehicles (transports/armor), which are part of the IFA3 mod.

We’ve also been using the default ARMA 3 islands for missions too, which are good quality maps. We’ve been picking areas that are rustic, so a WW2 setting would be believable.

Iron Front still works, by itself. You’ll need to connect via direct IP, since the server browser no longer works.

The team that converted Iron Front to ARMA 3 is no longer working on the full conversion, requiring the base game. That version had the full, quality textures. They’ve put all their resources to the degraded quality version, since most people aren’t going to buy Iron Front these days.

looks like fun. ARMA is awesome when played with a good group of guys. The flexibility the core game provides with mods is astounding. Even with its quirks and bugs, ARMA 3 is one of my favorite games. What really shocked me about the community was the quality of some of the mods. Mods are generally hit and miss, but some of the ARMA mods downright deserve to be paid for.

Two mods that have impressed me the most:

Task Force Arrowhead Radio (TFAR) and Advanced Combat Environment 3 (ACE3). These two mods should be a part of the core game.

That looks fantastic @saghen - thanks for posting.

I played Iron Front Liberation way back, this ARMA 3 version looks great. Amazing details in there.

The neat new GUI warns about dependant mods and promts you to a link. 6 Gb to download now

Sadly, when the mods list gets longer than three and requires an order, patches and so on- it’s the line in the sand that stops me.
I’ll loe all the AAR you guys are going to put but I’ll respectfully pass.
Not that anyone expected me to play…