I think I wouldn’t try that… 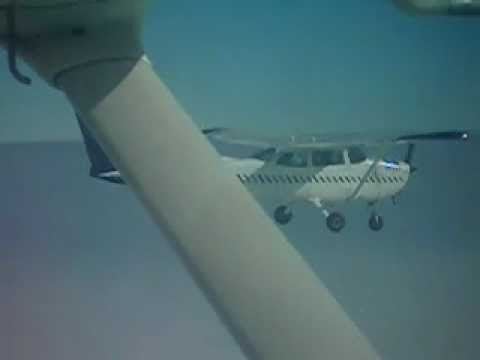 My roommate in college did something similar (unintentionally) during his checkride…
He didn’t end up finishing, for some reason.

I wouldn’t try that…

It is certainly forbidden as a split-s counts as aerobatics, but I wondered whether it could work without overstressing if you do it with a minimum speed entry and while relatively light. The 172’s limit is around 4Gs IIRC. But then it might accelerate too quickly and overspeed…

Limit loadfactor is 4,4G in Utility category. 2000lbs, empty rear seats and cargo. Design loadfactor is 1,5 times that.
So, yeah, maybe… But illegal both because of certification and clouds

Yeah the clouds make it even worse.

It’s very likely possible without exceeding design load limits, if you flew it very precisely, applied sufficient G in recovery and didn’t hesitate and allow the speed to build up.

Much like Bob Hoover could roll anything he got his hands on. Doesn’t make it smart for me to go try it, nor legal/safe.

Well, they obviously survive the maneuver, so yes.

The limit of 4,4 I’m more unsure of. I doubt that aircraft has a G-meter. Never seen a 172 with one. So how do they know they didn’t bust the limit, which would require a maintenance check…

Rolling is possible to perform as a 1G maneuver. A Split-S will require more than 1G. In the acro aircraft I’ve flown, a loop could be performed at 4G. The 172 does not have the power to weight ratio of those acro aircraft though, so I’m guessing it would need to pull harder to level out again.

although I believe there are modified 172:s that do aerobatics

Ill sit quietly at the back with my hands folded

FAA gettin another one doing stupid things for views

I don’t know. The video was uploaded ten years ago, and probably wasn’t new back then either.

I don’t know anything about the context.

A friend of mine (and fellow sim-er) recently learned to fly in Spain. During the three years he was there, nearly every week he told me stories that were funny, frightening and, had they come from anyone but him, totally unbelievable. Every plane he touched, from two different schools, has since crashed. Yes, it’s either him or them. I am going with them. Broad brush, I know. But I have heard more than enough to confidently continue painting with it.

As for the maneuver itself. He over-g’d twice: during the snap and probably again at the bottom. If he didn’t over-g at the bottom then he certainly over-sped. In a split-S, it’s one or the other.

he told me stories that were funny, frightening and, had they come from anyone but him, totally unbelievable

C’mon, we need to hear them

I can’t say much, my flight school (state university somewhere in mid America) crashed or damaged its share of planes while I was there. Right before I got there they’d had a real bad one; the ones I can remember while I was there were mostly ‘landed so hard on the nose the strut collapsed and wrinkled the firewall’ types.

Part of it’s the training environment, and the blind-leading-the-blind (21-year-old 300hr CFI’s training 18 year-old students), and part of it’s the maintenance pencil-whipping and corner-cutting.

Gearing-up a 182RG with brand new motor & prop on its first flight (mechanical failure, cracked actuator) seemed to give the MX folks a kick in the pants.

Then some of it is simply soloing students that have no business being in the cockpit, in the hopes that they ‘figure it out’. We can all speculate on the reasons that takes place, but the result is unqualified individuals who lack the skillset and judgement required to fly the airplane being set loose on solo cross countries and balling up perfectly good aircraft. We had one who simply drove a 172 off the end of the taxiway (6" drop off) because she wasn’t paying attention at night, at the home field…

ETA: That was the last bird in our fleet that still had wheel pants, too. It didn’t after that…

Probably some loose rivets after that.

When I started commercial instruction you needed 1,000 hours, an IR, a CPL and an above average instructor grade. You were then eligible to start the three week standards course to be a CAP509 instructor. When the standards were reduced to match America, salaries and competence dropped to rock bottom.

Sure seems to be the way things are trending these days unfortunately.

While doing a pre-flight when working on my PPL, my CFI told me when flying a C152, to always check the L bracket at the bottom leading edge of the vertical stabilizer for cracks. He said that would indicate if a previous renter had been doing snap rolls. It sounded a little bit like bravado, but I always checked it when doing a walk-around, not having any data to disprove him.

Better safe than sorry. The check doesn’t take too much time and effort I guess.