Hah, nah. it’s expensive as hell but the only supplier that could get it to me into less then 100> pieces

Reassembly time, this is where the small rings will go.

Axle back in, 1 bigger ring on either side, helps a ton but could use some extra I’ve discovered.

Other assembly with a dab of bearing grease added on all corners. This will leave a nice film

So yeah… I screwed up. I should have placed the pitch axis 180 around… Wooops… But hey it works!

The good news is, is that it feels smoooooooth, the ball bearing grease is a happy choice.

The bad news, there’s still a little play. i’ll have to dig a bit further on where to improve. Possibly rings and extra tape.

Going to open it up again later this week, first the viggen

Hah, nah. it’s expensive as hell but the only supplier that could get it to me into less then 100> pieces

Wut? I was talking about the Mudspike mug!

Wut? I was talking about the Mudspike mug!

perhaps I am a sucker for mugs

Spend an hour flipping the pitch axis that I fubar’d, and I added the aluminium tape with 1 later on the gimbal and one on the axis. then liberally greased it up with ball bearing grease. So far it’s tight as can be but I have my doubts about that fix… oh well.

Fresh in from the USA, the magical Gardena 5/8 gardenhose fix and Cougar/warthog extension connector!

All joking aside, it’s probably cheaper to whip up a cad file for a machine shop and have them modify a pipe. That’s a 10 minute job for professionals.

EDIT: In a hunch looked at shapeways.com(3d printing company) to see if someone took the liberty of building a new gimbal for the cougar. AND THEY DID! Ton’s of stuff from that author in this ED forum thread:

Still gonna see if I can build a stick extension in a cad program though.

Did some shopping today, got a 28mm to 22mm brass connector that you can solder copper pipes in. I can soldered a copper pipe of 50mm in the 22mm end, then I put the glorious Gardena connector over it. Oh, I also found a Gardena connector much like this one from the USA in my local shop… So bugger me with a fishfork, I missed that the first time round. I’ve also measure off a comfy length which comes down to about 39cm.

Oh, and ordered magnets and HAL sensors and I’ve got half a mind to order that 3D printed gimbal. So, lots of movement on the modding front today

Neat how the forum has placed these images innit?!

Is your mug alright? I heard some … rumors…

Is your mug alright? I heard some … rumors…

Yes, finished my coffee early this evening so it’s already in the are allocated for items to be cleaned in a hot wash!

Currently 80% through a fine beer!

So I thought I could get away without making cutout’s for the handle. Alas I need them.

Coffee and making some advertisement money

Helicopter flying is bliss now. So much control for so little effort! If only I could have a force feedback!

@BeachAV8R, wanna borrow my 12" extension next time you are flying a helo campaign?

One minute of silence for your socks…

Make sure you put money in the parking meter or your Mi-8 might get towed!

But… I am the relentless KMUD traffic police!

Little update on the HAL sensor test. Made the magic smoke escape from one already, time to go back to the drawing board.

So the internal cable shifted a little(modified Mini DIN-6 allowed to pretend to be a Mini DIN-5). When I tried to reconnected the stick it just didn’t fit snugly anymore. Soon enough it turned out the whole thread had come off. Not a surprise given that it’s a PVC like material that is holding a relatively heavy metal stick to a base.

Oh well, in Adam Savage’ words, I need to make it again to do it right this time

For the extension I ordered 6 5.9CM electrical ‘tubes’. 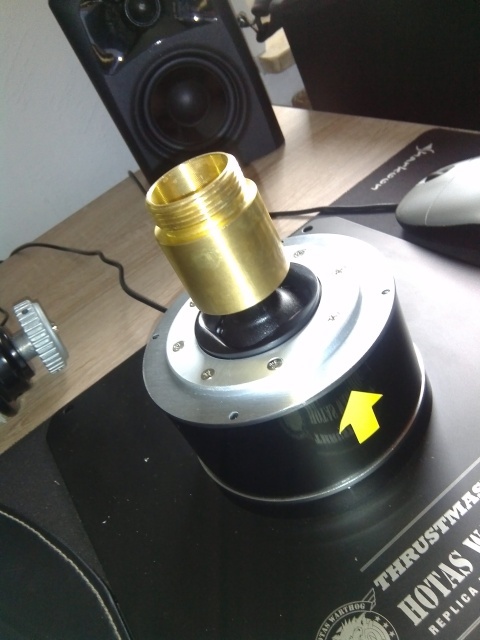 That effect pretty much(not my stick). I will order some empty Mini DIN-5 connectors so that I can solder on my own cable. That’ll be much easier.

Inspired by @Troll’s efforts with 3D printing I’ve opted for a similar solution:

Drawn up in FreeCad, which is a bit wonky at times when you are used to programs like Blender 3D. But very nice anyway.

Thread is 13mm high, shaft extends a bit further down so it can be glued down easily. cut-out for the Mini-DIN-5 connector is 3.5mm deep(4mm on the control stick) so that it has some surface to gain friction on. Currently trying to figure out what material to use.