I bought these new about 7-8 yrs ago and they worked good. During this time I moved and it had been a couple of years since I used them.

I pluged them in yesterday and I don’t get any response whatsoever? I tried to calibrate them. It doesnt even show up.

They were stored in our closet so they were not exposed to any extreme elements.

Any suggestions…replacing a board? throw them out? Salvage for parts?

The constuction of this stick and Throttle are top notch so I would hate to just throw them away.

Here is some info about the system I’m running in case there is a question. 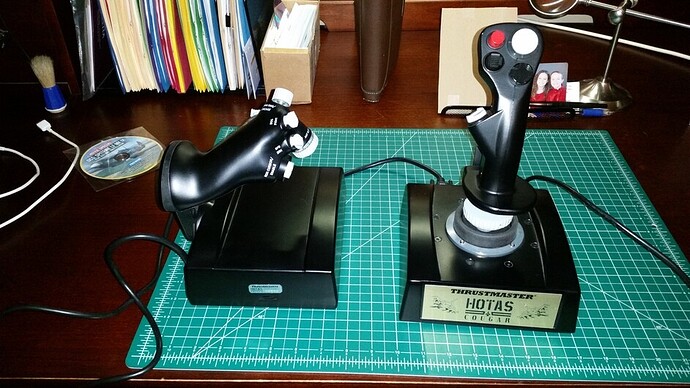 You might have to install drivers for them but I think that they should show up as USB game controller devices at the very least. Does Windows react at all?

Thank you for the reply…no…I get no response at all in Windows or the game controller. Acts as if its not even plugged in?

Can you take them to a friends computer to see if they work there? that will rule out if they are broken

Not looking good. It should be detected as something but there is not much else that I can think of.

When it happened to me (granted, it was the warthog) it was the throttle box that didn’t work.
Ended up having to replace the main PCB.

Thanks …I’m afraid that it looks like its dead. I guess I will have to try contacting Thrustmaster to see if their is a board to replace?

Thanks again for the quick responses. I’ll update this if I get an answer

There’s no spare parts anymore but I doubt the board is dead!

Have you installed the drivers? If you plug in the cougar before installing the drivers bad things or nothing will happen, but it wont work!

Here’s some info on the windows 10 process:

Gents: I still have to correct the installation of TF patches .. 4.3 will not install ... so back to 4.0 and try again. Does anyone have any experience with TM HOTAS Cougar installation in Windows 10 or 8.1? I might be forced to go back to...

Whatever you do, don’t toss em out, I am sure it can be fixed!