Yeah…I may have gone too far with this one…but it is very cool. 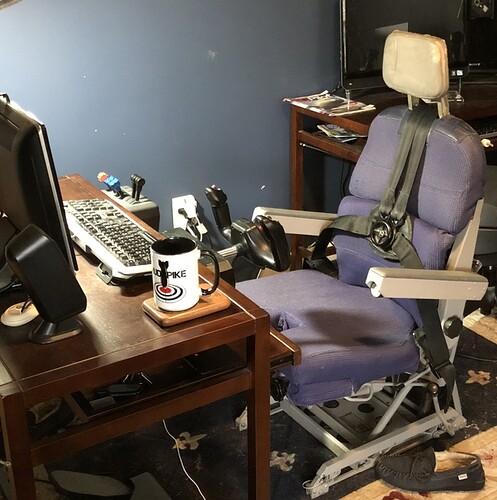 My wife found it on eBay for $375 plus $250 for shipping. It basically wiped out my Flightsim budget for the year. Its in pretty good shape. Everything works…I should probably get the seat covers dry-cleaned.

As far as “upping the emersion” - as I saw in a different tread, Troll built his own 5-point harness for TACAIR sims and it added to the emersion. I have to agree. I’m using this for COMAIR jets and commuter turboprops and it really does increase the emersion.

TACAIR use? I saw the review on the HOTAS shelf…might work if I can get the stick situated in the little yoke-column “cut out” at the from of the seat. If so, that will be cool.

I am unfamiliar with this expression…

Very cool! Could you ask your wife to find me one?
I’m contemplating using a car seat for my next cockpit build.

Here are a few she found:

The Airbus seat obviously doesn’t have the yoke column cut out. If you are planning a 727 cockpit, she also found a 727 Flight Engineer’s seat…as well as a fold down jump seat if you have guests over.

A car drivers seat is what I’ll be building my cockpit around too. They can be had on the cheap, are built to remain comfortable for hours on end and come on handy slide rails.

That’s the route I went. Salvage yards give a wide selection too

Only thing I would like to add would be that void where a centre stick could/should go.

Hmmm is that a problem with a car seat? haven’t thought of that

Wouldn’t want to be stuck to a sidestick situation because of VR.

For the time being I’ll keep with my ghetto setup: a cheapass tubes-and-fabric lawnchair, a stool for the throttle and a beer crate for the stick. Wearing VR goggles, this simulates soviet aircraft perfectly

is that a problem with a car seat

I’m counting on my ability to modify…anything…!

Aint no problem that can’t be overcome huh

I respect and salute that attitude! S!

Its in pretty good shape. Everything works…

Pilot ejection seats are generally frowned upon, by the passengers, in civilian airliners. I can’t imagine why…

I’m contemplating using a car seat for my next cockpit build.

I would recommend building one yourself and then have some nice covers made at a local car covering company. They’ll probably love a project like that!

I made the seat and backrest, and covered it, for my current simbox. The challenge was getting the cushions right. Turns out that ergonomics was rather important…

By getting a car seat you get an adjustment and reclining mechanism, as well as good ergonomics.

Hmmm is that a problem with a car seat? haven’t thought of that

Wouldn’t want to be stuck to a sidestick situation because of VR.

For me it is only a ‘problem’ with the length of the VKB stick extension. It means that the stick sits in front of the chair which is a little farther forward than is ideal. Not a big issue though … unless your desk is close

you get an adjustment and reclining mechanism, as well as good ergonomics

One thing I noticed with the airliner seat - great ergonomics. Obviously adjustable height, but also adjustable lumbar support and individually adjustable knee/leg support (guess it has to be individual adjustable because of the sot for the yoke column )- the arm rests have adjustment knobs - haven’t figured what they do - and can stow the armrests in the vertical position…enables petting the cat as it walks by.

The shoulder straps have a locked and unlocked lever. The only things it doesn’t do is slide back & forth (no tracks…they must still be on the airplane) and reclining back.

The latter isn’t a problem. With my previous office chair I used to tilt back an nap on long flights. With the new real seat, I can put on the shoulder straps and lean forward…kind of hanging in the straps for a nap…or maybe not.

I’m thinking of getting a ButtKicker if I can find a good place to attach it.

Lift the armrest and hold it in the desired position. Then roll the adjuster until it locks in place.
It’s basically just a adjustment screw, but you can’t apply any force to the arm rest, while adjusting the screw.

Locking in place will prevent the armrests from falling down when one the cats jumps up on my lap during a flight… bonking the poor kitty’s noggin…which I am sure is the reason this feature was designed and implemented.

When I saw this post, I was reminded that a colleague at work mentioned something about having an ejection seat in his stash.
Asked him about it the other day, and got a a couple of pics of it.
I’ve got no idea what he would want for it, but if anyone is interested just send me a PM for contact details. 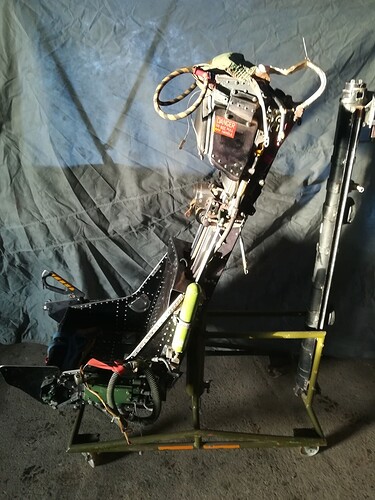 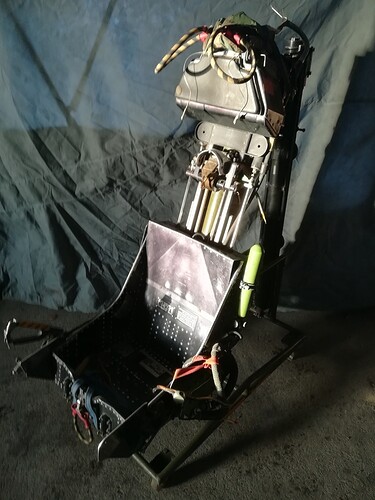