So due to legacy software requirements I still need to run a XP box. However as the original hardware on those machines is well past the mean time before failure, I need to replace it to avoid a catastrophic failure in the field. As it’s been years since I looked, does anyone know the max hardware specs on XP regarding HDD size, RAM, etc? I know if you go over a certain HDD size you can’t acces it. Is there hardware issue will h running a modern CPU, such as a 64-bit could not running XP?

I know there are some other possible solutions such as running a virtual machine with XP, but honestly I’d rather just have a dedicated XP box that I can setup once and not worry about.

The drive is usually never an issue because you can just set the drive partition to be small enough to be recognized, although that was earlier versions of Windows, I don’t recall XP suffering from it.

Things like CPU count/RAM are I believe version limited. Home is smallest while Pro and Enterprise were higher although I don’t recall specifics anymore.

The problem with modern hardware is there aren’t XP drivers for them. Sometimes you can get away with that, sometimes you can’t. I know Windows 8.1 throws a fit when 7th gen Core CPUs are installed because MS decided they should be Win10 only. XP is so much older, though, I think the problem is getting the motherboard chipset to work.

As a general rule of thumb, you need hardware built within 5 years of an OS’ release if you want it to run well. When you’re lucky you can get 10. I would look for used (but newer than original) hardware to run XP today, not new stuff.

The drive is usually never an issue because you can just set the drive partition to be small enough to be recognized, although that was earlier versions of Windows, I don’t recall XP suffering from it.

The maximum partition (and disk) size is a function of the operating system version. Windows XP and the original release of Windows Server 2003 have a limit of 2TB per physical disk, including all partitions. For Windows Server 2003 SP1, Windows XP x64 edition, and later versions, the maximum raw partition of 18 exabytes can be supported. (Windows file systems currently are limited to 256 terabytes each.)

Gracias, I was close on what I remembered.

A friend of mine is using XP. The PC’s video card just bit the dust. He found a GMAX2 on line for $20. I’m hoping XP has some default drivers that will work, 'cause I don’t think they make XP drivers any more.

It’s basically photo printing software, think your school pictures, little league photos etc. There are newer options that are compatible with modern OS’s, but this is already paid for, and I get not investing in new software that does nothing different (literally the same functionality). Additionally all the other hardware in the production chain is spec’ed for the XP version and it all works.

If I was setting this up from scratch I’d definitely make some changes, but since it’s already up and running no reason to fix whats not broken. Also everything is off-line, and hard lined together. So basically XP service pack 2 install, and leave it. No updates, patches, etc needed. One advantage of using old software at least.

I cannot conceive of someone putting a drive over 2TB on an old XP system. That is literally a scenario I would’ve died of old age before imagining.

I cannot conceive of someone putting a drive over 2TB on an old XP system. That is literally a scenario I would’ve died of old age before imagining.

Back in 2002/2003 when I was living at university dormitory we had a fast, brand new LAN network built on fiber, spread over all campus buildings. All the students used DC++ for easy and fast P2P file sharing. I remember seeing one user (probably IT student) having over 1TB (pretty close to 2TB) data shared. To put this into perspective, at the time I had 40GB HDD and was probably still running on Windows 98 SE

Disk and Net were a bit more predictable within the industry. Memory, cores and the like less so. GPU’s very much wrong.

I was at a Microsoft conference in 2003 ish, and remember the Gates keynote prediction for the future of PC’s around about the time Windows XP was going strong. Not too bad, considering (as in, his prediction for 3 years away and the exciting future of 2006). 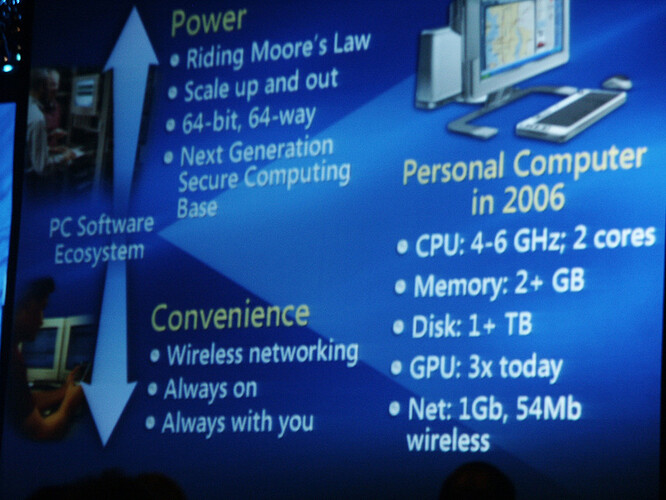 (Not my pic, I just remember that slide and thinking - wow, 3x the GPU from today, roll on Windows Longhorn)

Ironically, he pretty much nailed the iPhone spec and use case.

You are playing Russian Roulete with that end of life OS, IMO. What about moving on to Win10 and running XP as a VM?

I don’t have a problem with that much total space, spread across multiple drives, it’s just that a single drive of that size didn’t become affordable until recently.

In fact, I’ve never had a drive over 1TB in size myself. I instead tend to have multiple drives and keep all my eggs out of that single basket.

+1 on the VM - something I did with XP for years but never had to use it again.

There is a compatibility mode in W10… although…

I would also use a Virtual Machine.
I have been running both Win XP and several Linux systems in VirtualBox (yay for free software) for quite a while now.

Granted, sometimes you do run into problems, but I still think it is worth the slight overhead of learning how to use it.

Edit:
Reasoning: hardware compatibility is going to be more and more an uphill battle.

So to hit a couple things people have brought up:

Virtual machines: Yes this is an option, but has anyone ever tried to run a network from the virtual machine (ie the XP VM is the server)? I’d end up having 2 VM’s connecting to a bunch of other hardware via a fun collection of CAT 5 and DB25 serial port connections. Not saying it’s not workable, I’m just saying I don’t want to have to do it.

Getting away from XP: This is probably the better option, but it’s cost prohibitive. Changing the software is going to run around $800 per license. The hardware it’s connected to, may or may not work with the newer version of the software. The cost to update the hardware would run into a couple of extra zero’s, making that a no go right now. Eventually the hardware will need to be replaced and then I’ll cross that bridge.

A little local PC chain makes there living selling old refurbished Dell business desktops. I think that may be a nice turnkey option, and honestly cheaper than building from scratch. I can even spec which SP of XP I want installed, so it would be about as close to plug and play as I’m likely to get.

I have done network stuff with VMs. Worked fine.
Not with XP though, that was Linux as the guest on a Windows PC as host.

My main concern is security. You’re probably really close to not being able to run a current web browser, and XP hasn’t had any security patches for some time. Probably the biggest ransomware attack ever was launched on unpatched XP machines. Using XP to web surf is like having unprotected sex in the 80s, IMHO.

Totally closed network, not online in any way shape form or fashion. The only physical media that goes into any of the machines are the cards coming out of the cameras. We pull the data off the cards, and everything is handled in that closed offline network. Those cards go into a separate (and modern) system that pulls the pictures down again for preparation for online sales, before they are put back in the camera’s and formatted. Payment is handled using either tablets or sell phones with card readers, again totally separate from this legacy system.