Situation:
US forces landed in southwestern Malden in 1944 and the German forces conducted a fighting withdrawal. US forces took the town of La Pessagne. The German forces, along with 3 AA guns, are trapped in Vigny, a village to the north. They were not able to retreat, as the advance was too quick.

Mission:
A small US Army unit was detached from the main element and ordered to clear Vigny and destroy the AA units encircling the village.

After Action Report:
The plan for the attack is for the unit to complete a right flanking maneuver and climb the hills to the east of the town. US forces would get height superiority and rain death before. 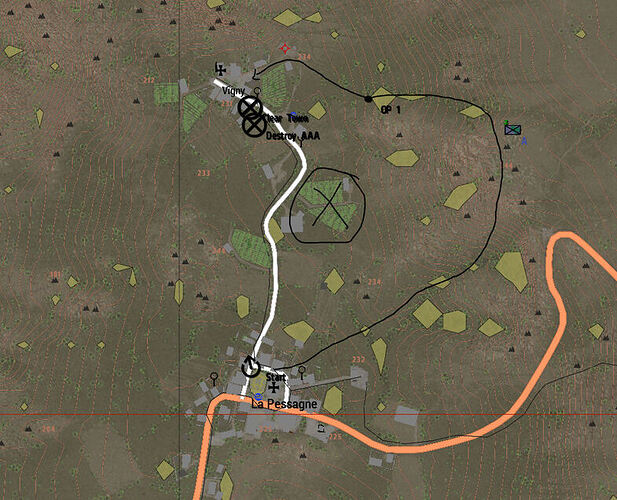 Led by Sgt. Bonchie, US forces climbed the escarpment to the east and immediately discovered a small German patrol, which included a deadly MG 42.

Luckily, that patrol was no match for the Bonchie Brigade and the unit was able to gain height superiority. Before opening up on the town, the group observed enemy forces in the area and did a threat assessment.

Sgt. Bonchie left the BAR and newly acquired MG42 units on top of the hill to provide suppression.

While the machine gun team remained on the hill, the assault team proceeded down the hill. It was not without drama. Several team members were hit, but none mortally.

Now that all team members were patched up, the general assault on the first AA gun emplacement began.

The assault on the first emplacement was successful and the demo man laid the charges.

After the charges were laid, the machine gun and assault teams reunited and general advance to town begun. The first objective was the two story building that was a good observation point for the whole area.

After observing the town and fortified positions, Sgt. Bonchie continued with the plan to flank right and north of the town, clearing positions as the unit went.

As the unit began its flanking maneuver, Sgt. Bonchie observed a small white, single story house that allowed the unit to take cover. There was momentary confusion as the unit discovered that the house was occupied. The enemy soldier was quickly dispatched, however.

After leaving the relative safety behind the small white house, the unit “runned and gunned” it to the north of the village, were the village was to the south and to the north was a sleep slope, which provided safety.

The general assault on the village began in an orderly fashion along a stone/concrete wall, which the unit stacked neatly along it.

Enemy contact at the veranda behind the restaurant and the unit spread out a bit.

At this point unit cohesion became an issue as soldiers separated to go house to house clearing. Two soldier and the medic went to the village square and cleared the church area, while the other soldiers did a general search.

Around this time, perhaps earlier, Sgt. Bonchie was fatally wounded and soldiers became unorganized. Some soldiers were in one part of the village, clearing the northwesterly AA gun emplacement, while other soldiers were trying to take on the other AA emplacement single-handedly, and getting wounded for their troubles.

Luckily, the Sgt. Bonchie’s twin brother was also in La Pessagne and he quickly joined the unit for the final push. He got the unit reorganized. The demo man set the charges to one of the AA guns and destroyed it.

He then went to the other AA emplacement that was cleared earlier and set the charges and blew them up.

A successful assault on Vigny was completed with only 1 KIA and multiple WIA.

That was great fun playing that mission. And a nice AAR, too!