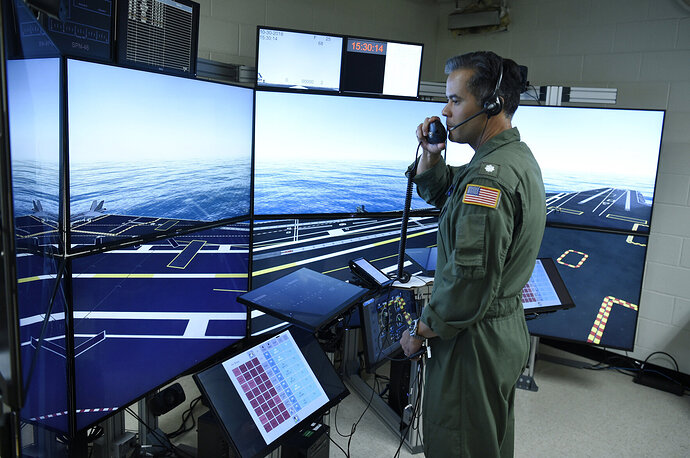 One of the most dangerous environments in the United States Navy is the deck of an aircraft carrier. Catapult systems that can remove limbs, furious engines, whipping propellers and high winds create a hectic environment.

Hope they achieve the crew safety and proficiencies they are expecting with this new training aid.

@Navynuke99 may appreciate this. In the early 2000’s (during Vern Clark’s illustrious tenure) I was at a meeting where an admiral told us that they were looking at taking firefighting training, virtual…if they could just figure out a way to simulate the heat…I thought the guy was high.

For the non Navy types (anybody’s Navy will do), the worst thing to face at sea is a fire. You can (and will) eventually leave a sinking ship, but, unlike on the land, with a fire at sea there is no place to run. So in the USN, every Sailor, Chief and Officer is also a firefighter.

There are two firefighting schools (Norfolk and San Diego) that use shipboard compartment / flight deck mock ups with real, charged fire hoses, full fire fighting gear (coveralls, helmet, air pac, gloves, etc.) and, most importantly real hot…hot as hell…fires to fight. I’ve gotten through it 3 times (for every sea duty assignment) - IMHO it is the best, most realistic training the Navy has (and I was CO of the Navy’s intel training center).

And this admiral wanted to take it virtual…fortunately he was successful.

I was at a meeting where an admiral told us that they were looking at taking firefighting training, virtual…if they could just figure out a way to simulate the heat

Sadly, this doesn’t surprise me at the least. I could see that as just the sort of harebrained great idea that somebody would have to try and get another star. Hopefully there was a Master Chief around to recalibrate him.

So maybe showing my age a bit, but when I ran Battle Stations in boot camp, we actually used OBA’s with real canisters instead of SCBA’s (though we used the Scott Air Packs exclusively aboard the ship.

I actually enjoyed the firefighting training part of the job. Because the main spaces were so large, required dosimetry and security clearance for entry, and had JP5 tanks below them (not to mention the lube oil and high voltage electricity), we did lots of firefighting training, and usually wouldn’t count on the ship’s Flying Squad or DC division to help out, except for maybe in a secondary backup capacity in the event of a serious mass casualty.

and had JP5 tanks below them (not to mention the lube oil and high voltage electricity),

Nah, those are in hangar bay 2, starboard side. They make the liquid N2 to cool the Sidewinders and Mavericks.

Yes…well…that is true enough…in fact as we spent weeks at sea we would sometimes compare our situation with that of prisoners. i.e. we were essentially locked up in a big box with nowhere to go, told when to sleep, when to get up, when to work and when to sleep. All in similar drab uniforms. Only so a short time allowed in the daylight and to exercise.

After such contemplations it was usually noted that the one difference between us and prisoners is…Prisoners are not in constant danger of drowning.