VKB Gunfighter has been announced!

Looks like VKB has pulled the wraps off of the design of the VKB Gunfighter and Gunfighter Pro. Looks like an excellent alternative/addition to their existing line (and, soon, to my warthog

Here is what the Gunfighter (regular model) looks like: 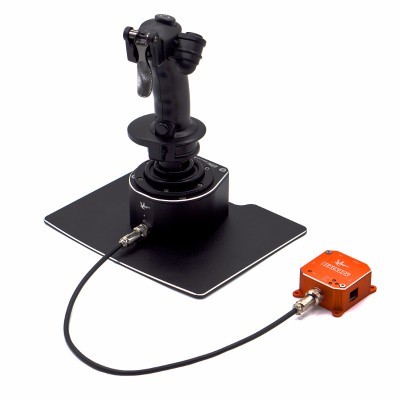 And here is the Gunfighter Pro: 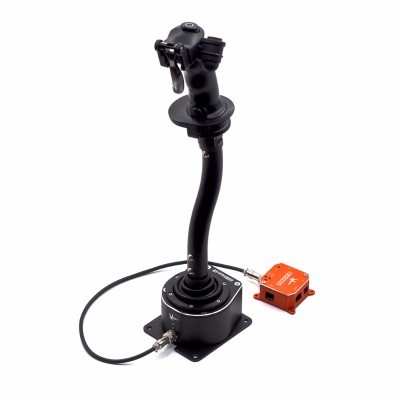 I am looking at the Pro model to replace my Warthog stick with a better gimbal system as I am starting to encounter (or notice) ‘Stiction’ issues. Mostly I am going with the pro because of the smaller base plate which will fit better with my cockpit and side-stick design.

And, yes, @near_blind and @klarsnow, if I can overcome my center keyboard mount issue I am tempted to go center stick with this one as well. Maybe. Maybe.

Over on the VKB forums a lad by the name of Rainer Rohde has taken over the North America distribution of these devices: http://vkbcontrollers.com/. You can add yourself to the preorder by contacting rrhode (and sending him your preference and postal address) at: [email protected]

I will be posting a review of mine after I receive it and give it a little time for me to settle in with it.

Looks really good!
I like the idea of friction dampers. The return springs will still be on the light side, when using an extension, but with the added friction it may have enough resistance.
Quality wise, you can’t go wrong with VKB. Way ahead of anything Thrustmaster ever produced…

They have not responded to my email. I wish they would. I want this warthog base replaced.

Who did you email, and when?
You could PM rrhode on the ED boards. Or I can do it for you, if you like?

I emailed the address rrhode said to email on the VKB forums. I left another message on the VKB forums today, but I think people are out celebrating. If I don’t hear back Monday I’ll drop another line.

Just FYI, these are open for preorder as of now.

Does anyone know if you order the VKB-Sim Gunfighter Base Only, do you need to order adapters separately in order to use a Warthog stick?

Yes. Pretty sure you do. If you order the Gunfighter base I think that you need the gunfighter adapter: http://vkbcontrollers.com/?product=vkb-sim-tm-warthog-adapter-for-gunfighter

As I understand it from Rrhode, this adapter is needed to attach the Warthog stick to the Gunfighter base.

EDIT: I have sent him an email asking about this.

Thanks @Fridge. So that makes it ~$300 to replace my Warthog base. I can buy a whole new stick for $280, so I’ll probably wait to read a review before dropping that much coin on the base. The adapters are not available regardless. Will keep watching this space.

I’m “upgrading” because I’ve become firmly addicted to the center stick set up, and the warthog gimbals just isn’t designed to take the abuse of a stick extension. The center of my throw currently feels like gravel, and there’s a bunch of irregular play in there as well. I’ve been in the market for a new stick since last year, and my experience with the MFG Crosswinds has left a positive impression when it comes to cams.

I’ve seen some images of the gimbal design and it’s a joy to the eye and mind! I hope they picked the right materials to limit wear.

Proper bearings though, that’s not something thrustmaster knows about.

So, I am reading that the stiffer springs in the adapter kit are to support the heavier TM grip. @near_blind brings up a good point about control shaft length, the longer of which will have greater leverage. It will be interesting how this shakes out (pun unintended).

I’ve gotten rid of center stickiness for the time being with the grease mod. But looking for a little smoother action and more precision, if it can be had.

I sent an email to Rrhode and the adapter does adapt the Warthog stick to the Gunfighter base. There does seem to be a little surgery required.

So, the TM Warthog Adapter for Gunfighter is installed partially into the grip (electronics), and at the bottom of it (the actual adapter with contact plate). Now you can mount the thus adapted TM Warthog grip into the Gunfighter base.

You then need to load a VKB-made TM Warthog profile, and then all the buttons work on your simulations.

There does seem to be a little surgery required.

I guess it works like the Black Mamba TM adapter. You need to open the TM Warthog handle and remove the screw nut adapter and replace it with a VKB adapter. 5 minute job.

I love the fact that a company like this can provide a high end design for the price they ask and that there is enough demand for it! Quite wonderful really, never figured that a few years ago when microsoft abandoned all controllers(Whyyyyyy).

This is the new grip for the Gunfighter:

Looks great. Funny how with this and the VPC Mongoose we will be getting two almost identical setups at the same time. Still undecided which one to choose.

It’s a great time to be on the market for new sticks! Honestly, I couldn’t help you with deciding but less us know how whatever your choice may be feels!

A little more information from the VKB Forums.

VKB is proud to announce the production launch of the VKB-Sim ‘Modern Combat Grip’ (MCG).

This controller was developed by AVIAAVTOMATIKA in Russia for Sukhoi’s modernized ‘Flanker’ series of fighter jets, as well as their 5th generation prototypes. VKB engineers adapted the ergonomics of the real ‘Flanker’ grip for the use in flight simulations with only minimal design changes.

The VKB-Sim Modern Combat Grip (MCG) is compatible with the following controllers:

*To ensure compatibility with the Thrustmaster® controller base, the MCG’s axes controls (ministicks/brake axis) will function as hat switch/buttons only
** Via adapter, sold separately 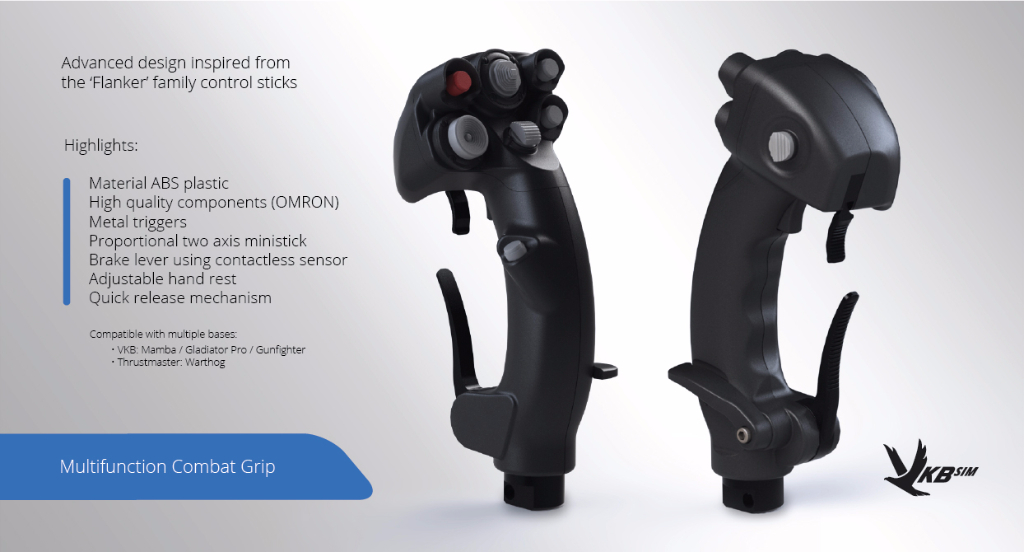 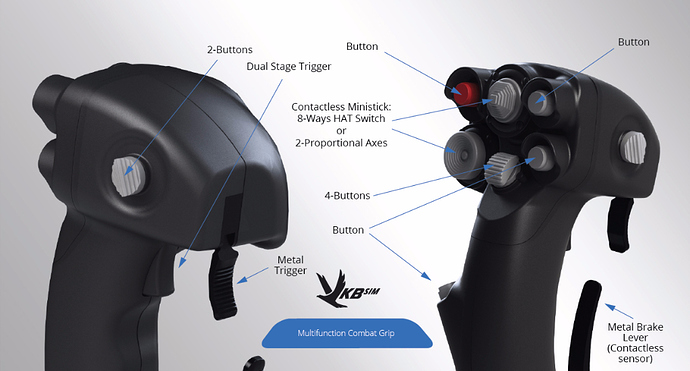 Price:
MSRP $99 (plus shipping and tax (where applicable))

A few additional items from RRhode:

Q: That external twist is interesting allso, some kinda extra piece that will be placed between base and stick?
A: The external twist adapter will indeed go between the controller’s base and the grip. More details later.

Q: Pinky Switch?
A: VKB is listening, and after some back and forth with Ilya he agrees now to include that pinky switch that we all (including me) want for the MCG. Due to the design of the MCG, it might have to move up and to the side, but you will get that extra button on the grip!

Update:
Also, the 2-way switch on the right side of the MCG head for your index finger will be redesigned as 4-way switch!

EDIT: I will likely be getting one of these to go with the GunFighter base that I have ordered. I will provide a review.