So this will trace a bit of my initial impressions on vorpX - basically a bit of software that sort of psuedo-VRs some games that don’t have VR integration, and even some that do. I’d guess that 99% of the time, native VR is always going to be better than vorpX.

First - DO NOT BUY VORPX - based on anything you see or read here (yet).

Based on lots of reading on the forums and internet, there are definitely camps that are fans of this software, and a lot of people that really aren’t. At $40, with no demo available, it is a bit of a leap of faith to try it, and you have to want to tinker and have expectations that perhaps it isn’t the cat’s meow. So I went into it with that knowledge.

I will be writing a review-ish of it for the main site eventually, but for now I’ll just be putting some non-exhaustive thoughts in this thread. I’ve only just installed it and am working through trying a couple light older games interested in what it can do.

First up to try was the original Far Cry. It is one of the “supported” games that I guess has a profile worked up for it already. Basically, you load WMR, launch vorpX Desktop, from which you can use your desktop and further launch other games. vorpX hooks into those games and forces them to be 3D-ish. Different games have different capabilities and some work better and worse with this software from what I’ve read.

In this case, Far Cry looks - interesting. The default profile didn’t really look great to me, it was far too zoomed in, and I actually did not prefer the head tracking option to the just plain old mouse option. There are full-3D VR games you can experience with vorpX or you can use them in a sort of theater mode that has a 3D quality to the gameplay. You can adjust these settings on the fly with an overlay that has a ton of options.

I found that Far Cry looks best for my headset (HP Reverb / WMR headset) using the “Immersive Screen Mode” which has a slight wrap-around, and “Geometry” 3D effect. You can’t see it in these screens, but the trees and vegetation in the foreground are indeed in 3D…giving a depth and feel of VR to the scene in VR. FPS was fine with everything maxed out.

Motion in these kind of games will probably get most people sick unless they have some stout VR experience I would guess. I didn’t have any problems, but I wasn’t playing real aggressively - just tinkering and only spent a small time in testing.

These images were taken “through the lens” with my cell phone camera. In-game imagery is clearer, and wider field of view with more clarity…I just can’t get my lens in far enough to give the true representation. The Reverb colors are looking pretty good though…I will say… 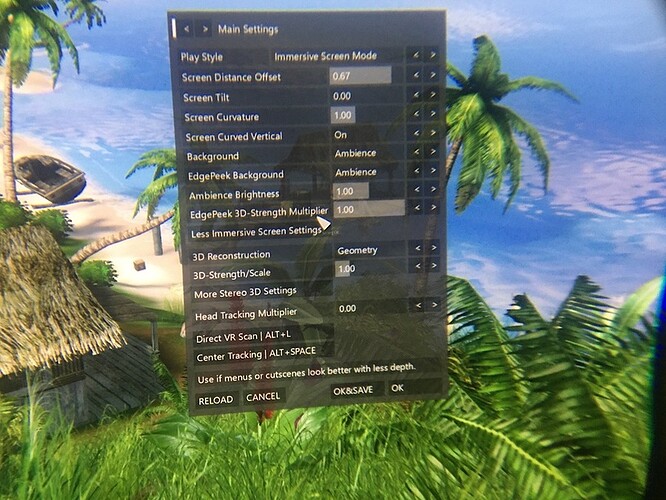 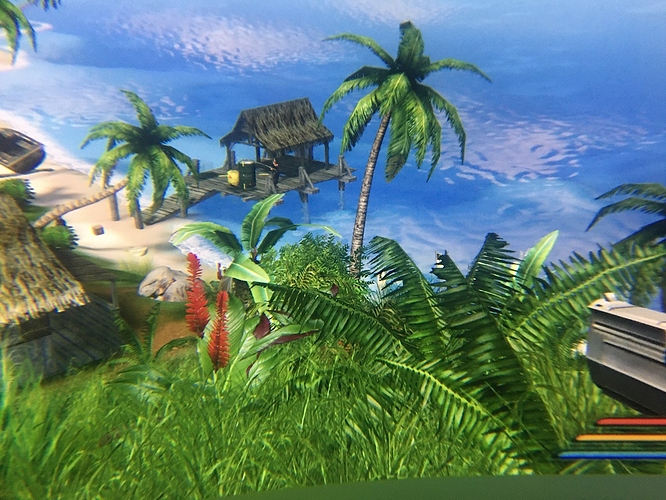 Anyway - it is pretty cool. Sort of. I’m reserving judgment. I’ll be trying some older games like Arma 2, and then move on to some older flight sims and see what those are like. Kind of a time wasting venture, but whatever…

First - DO NOT BUY VORPX 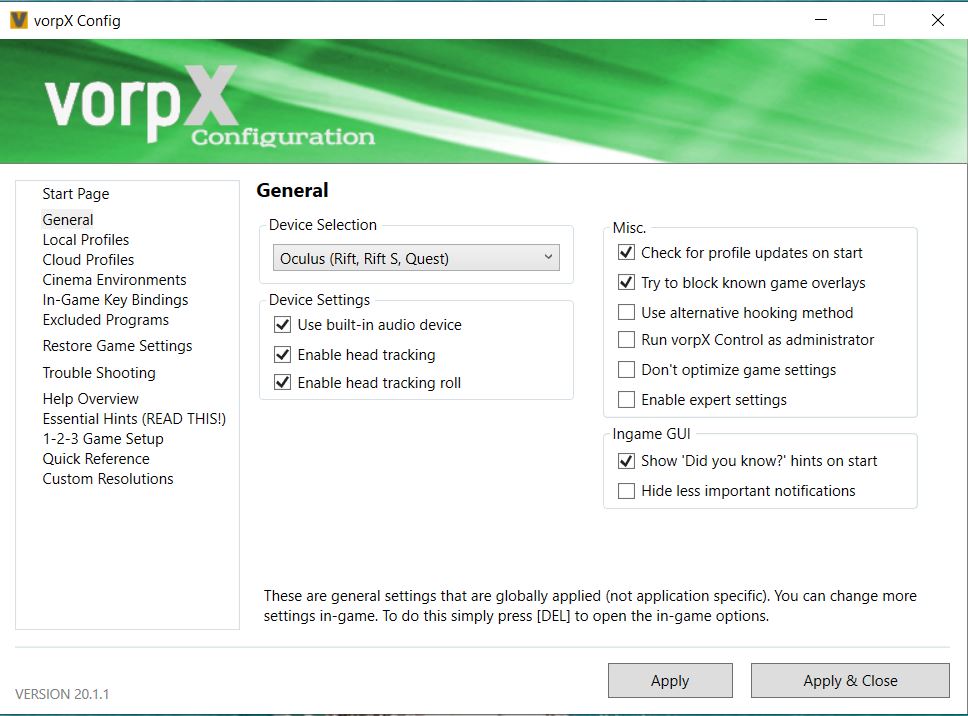 I realy like it. I mean when someone is talking about not buying something and then buy it in no time.

I am completely the other way. I usually talks about buying something not buying it eventually

Haha so you did it. Welcome to the club

The only FPS style game I tried was Witcher 3. I couldn’t really decide if I like it or not. Somehow it looked cool in 3D, but I guess the resolution of the Rift CV1 might play a big role for non-native-VR experiences.

I enjoyed company of heroes using the big screen app and did try vorpX as a demo but it was a long time ago. Maybe they pulled the demo my memory is not what it was

I am happy to help if the need be! Ralf on his forum is also quite responsive.

In this case, Far Cry looks - interesting. The default profile didn’t really look great to me, it was far too zoomed in

Did you run the Direct VR Scan (either from the Main Settings menu on your first screenshot or via Alt+L)? Only after that vorpX sets proper FOV and in some games also allows head movement independent from mouse (this is actually quite impressive - I tried Oblivion and believe also Skyrim works too) and adjusts head tracking.

Yes. VorpX is an “aftermarket” solution to VR for games that were never conceived for VR - so very often they either do not have proper first person mode or / and quite noticeable head bobbing. First person mods exist from the fan community for a good number of games but the head movements are not always cancelled - and (at least for me) this causes nausea (but one can get used to it to some degree).

At the moment I am having fun with GTA 4 with some texture mods and first person mod. It is fun, it looks good and you can actually play the story line. Kingdom Come Deliverance is queuing up

and is already set for first person (ingame mode) and proper FOV and head tracking via vorpX.

Just one more comment (and then I shut up

VorpX uses two different methods for 3D Reconstruction - geometry G3D and Z3D. G3D is proper way to display 3D but is very heavy on GPU. Z3D (using depth buffer) is great for FPS but is not as good as G3D.

When I got my RTX 2080ti I thought I could run almost any resolution on vorpX (SS does not work with vorpX; instead you run the game in any 4:3 resolution and the SS is achieved via higher resolutions). I run 3200x2400 with my Reverb to match as closely as possible its native resolution. And when in G3D reconstruction mode, it pretty melts my GPU

But yeah… I am having loads of fun. I was hoping to get older sims to work in 3D in VR (you can actually wrap pretty much everything in VR with vorpX but not all of it in 3D! and that may be a bummer) but so far I was able to get just the Il2 1946 (via OpenGL and community profile; you can also make it work with Opentrack that translates HMD movements to freetrack protocol). It is quite OKish but nothing to write home about. Cliffs of Dover was a no go for me. Maybe you will be luckier

So…umm…this actually works…! Strike Fighters 2… Been messing around with it for a couple of hours and…well…it works. More details to follow, but it works. These are “through the lens” pics with my iPhone through my HP Reverb… 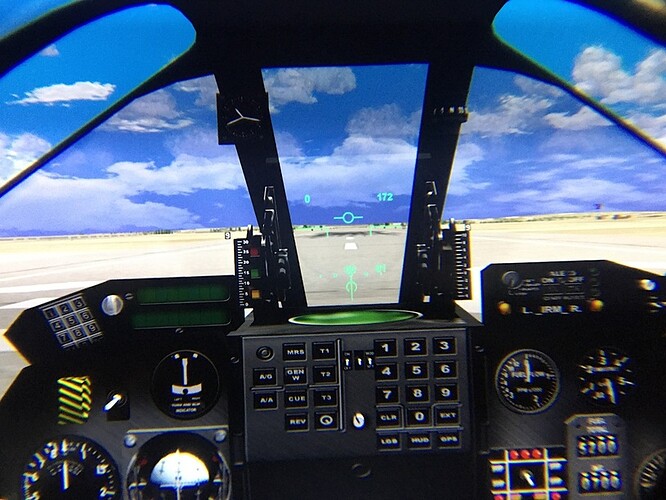 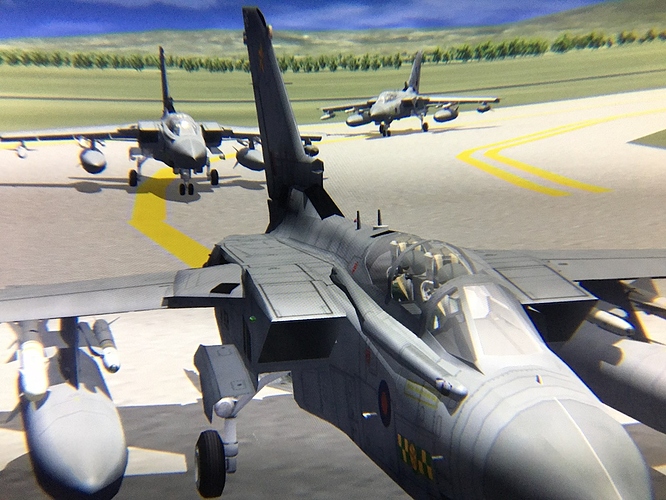 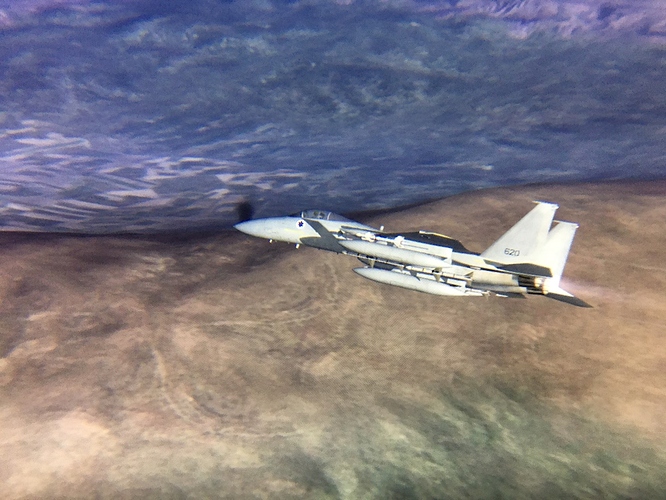 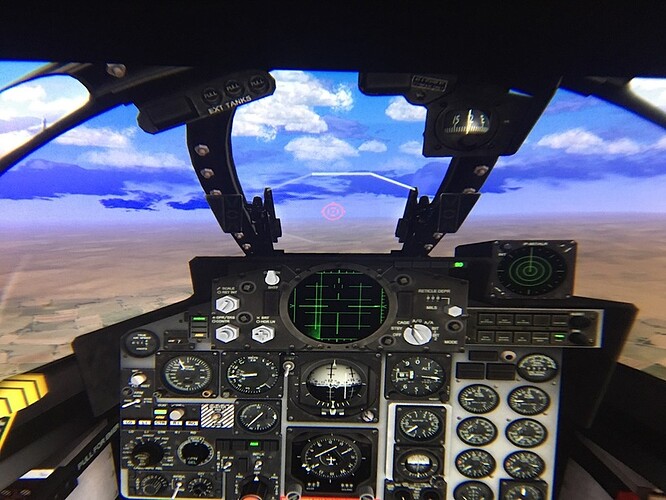 No…sorta…I’ve tried several different airplanes. The A-6 for instance, only allows a horizontal arc of maybe 130° total before you reach the view constraints. Other aircraft like the F-4 and F-16 allow for maybe 220 to 240°, so I think it might be part of each aircraft’s specific INI file perhaps (?). There are up and down limits as well, but moreso limited in the down direction and not in the up. There is no roll “DoF” that I can sense, but it really doesn’t matter much to me - the 3D effect of the cockpit is pretty awesome.

DISCLAIMER - Do not buy vorpX. Do not buy vorpX based on my impressions or what you see here. It is simple to use (in my opinion), but I don’t want your $40 on my conscious if you don’t like it. - EOM

Resolution is MUCH better than what I’m showing in these pics because I’m trying to jam my phone into the headset without scratching the lenses and juggling the mouse, headset, and phone all at once.

VorpX in this game sort of hijacks the mouselook capability and ties it to your head. It is very smooth, very natural feeling. You can set it using the VorpX controls to be 1:1 movement or have it set to a ratio similar to TrackIR. It is very nice and also works for external views. 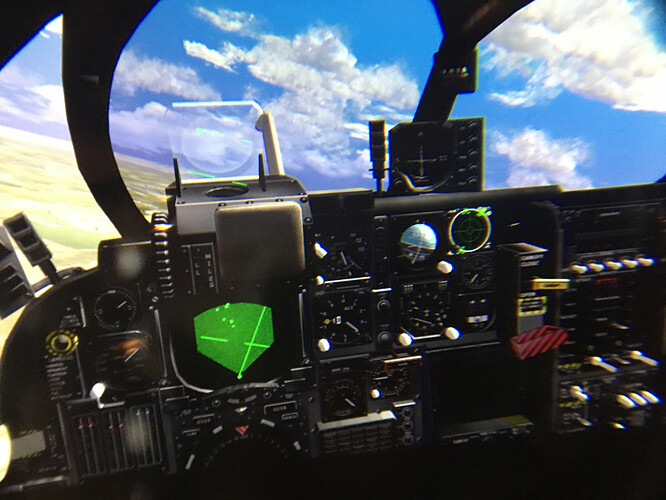 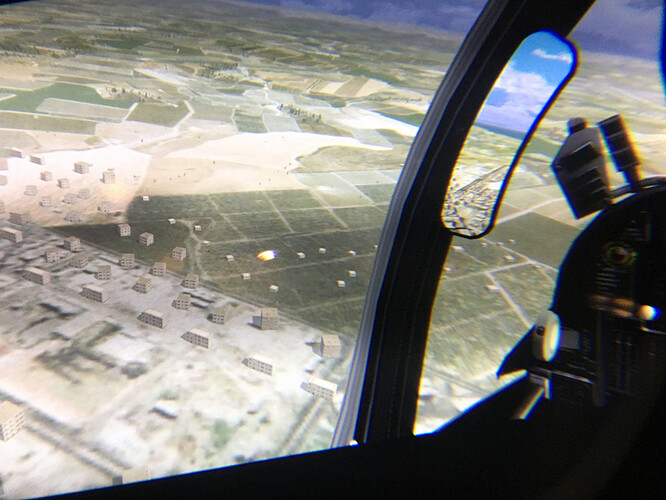 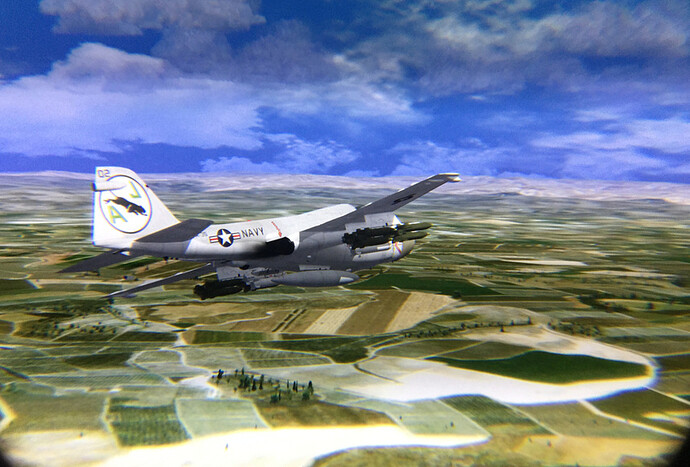 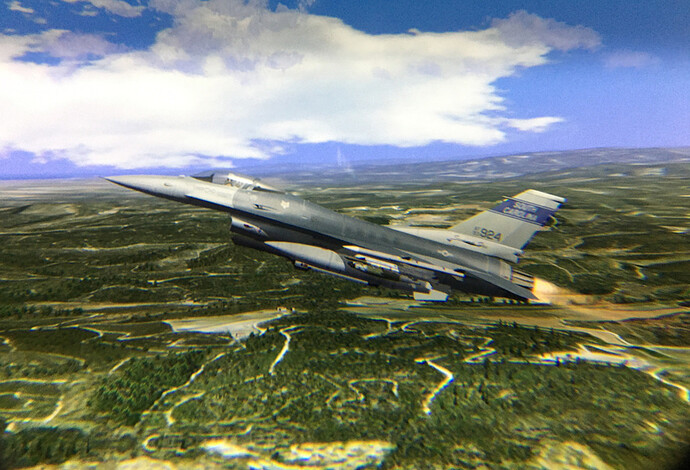 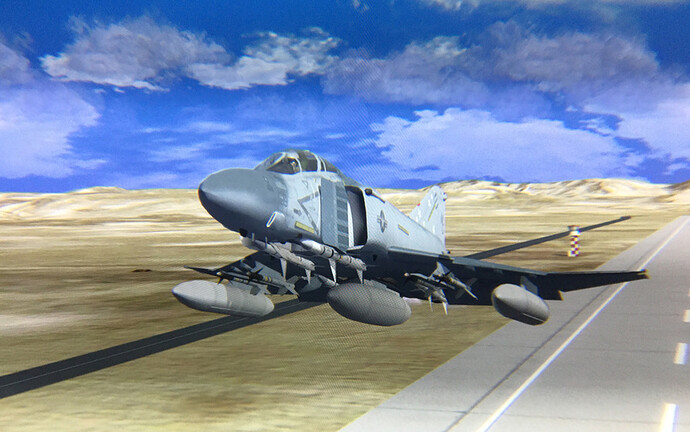 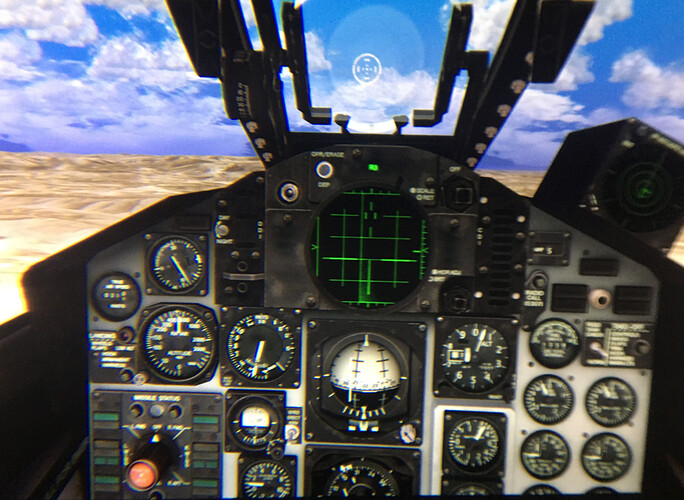 I don’t want your $40 on my conscious It has to be changed manually - it used to be easy to just change it globally in viewlist.ini and have unlimited but you can tailor each jet specifically in the cockpit.ini including moving laterally.

@BeachAV8R
Nice!
Super excited about the setup how to run this. Thanks for the hours spent fiddling. I think the consent in Combatace was, that it is not possible.

In the video it looks like the HUD projection is a little off though. But i guess it is not a deal breaker…

Oh my, it looks so good.

When is the next Rift S sale happening? I need one…

If you had the MSFS2020 Tech Alpha 1 and you had vorpX do you think it would be theoretically possible to try it - just as a hypothetical, in a purely non litigious kind of way?

This guy seemed to really enjoy ARMA3 helicopters like that: