Hey everyone. Just starting to get back into Flight Simming after a few months away (almost a year for DCS) and I am trying to commit to VR.

First: I have a pointCTRL device but it was proving (a year ago) to be difficult to configure with my HP Reverb G1 and Windows WMR (extra screens ans such). I think that this has improved … but one thing I am trying to avoid is 30 minutes of setup for a 30 minute flight. I inevitably forget to start something by the time I get in game. For anyone who has this device: does it ‘just work’ for you or are there a lot of steps that you have to run through every time you want to get in VR? I admit my general ignorance with this and level of laziness to search through the PointCTRL thread on the ED forums.

Second: Other hardware devices. The primary thing that was preventing me from comitting to VR previously was the large set of additional hardware devices that I have. I built one, have 2 Thrustmaster MFDs and a CH Products sticky-button-thingy. The problem with these in my custom cockpit chair is that I want to reach out and use them, but can’t see them or I am continuously hitting them when trying to use the HP Reverb G1 hand controllers. Do you just give up on those devices? And I realize that PointCTRL above would make that somewhat easier…

Third: Viacom and VoiceAttack. Do you use this a lot? Again, know I should just get off my lazy arse and commit to learning it, and I know that the people that do use it love it. I guess I am looking for someone to tell me to stop resisting

Fourth: fpsVR. Is there a way to tell it to stay in a virtual location and stop drifting up into my view (and over the top of the cockpit displays that I am trying to see? I usually start it and then, about 10 minutes in kill it

. I guess what I am really asking is how to bring up the fpsVR settings page. Maybe I’m old 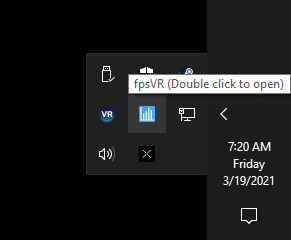 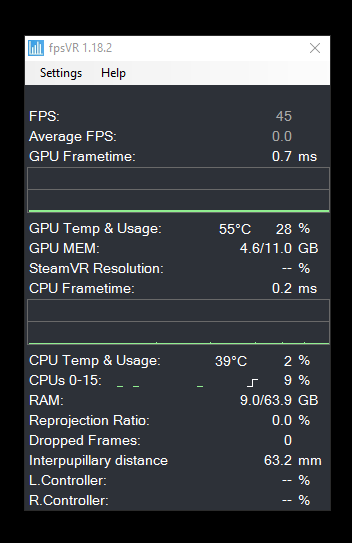 On the fpsVR menu. Click Overlays. From there you can customize where you want it, how much of it or just off. 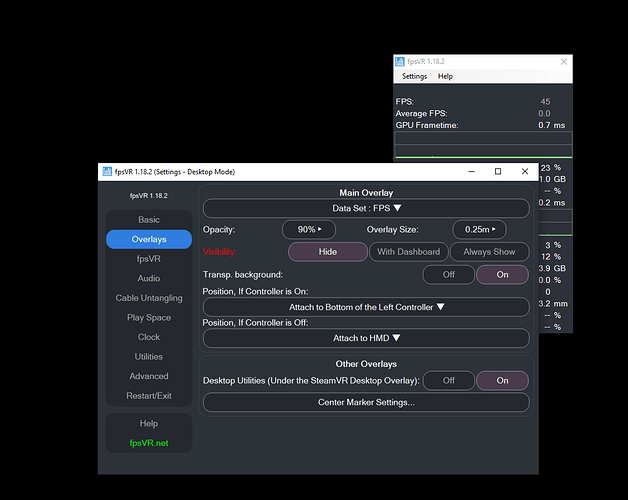 I think things like handles and levers are easy (and immersive) enough to manipulate in VR, but rows of identical buttons are tough to quickly identify, so I end up just using the mouse. I also tend to map things that I use a lot but are hard to manipulate in game, like cockpit light controls that have the inner and outer rotary knobs.

Wow. I just pulled the trigger on an Oculus Rift S yesterday! So, I will be joining you in this VR adventure. I was seriously impressed with the demo software that ran with the initial setup. I also fired up Squadrons as my first VR game of choice. That was probably a mistake, but it was still really impressive. Scale is probably the defining factor when trying to compare the experience to a flat screen? DCS and IL-2 will be the project for this weekend. I expect much tweakage to dial them in. Still, it’s been fun, even if I don’t decide to fully commit.

I guess what I am really asking is how to bring up the fpsVR settings page.

Left controller thumbstick down click gets to the SteamVR overlay in WMR, and fpsVR settings are a gadget on the dash.

Edit: Attach to wrist is a good setting as if you don’t want the fpsVR display to appear then just rotate or even turn off the hand controller.

1.) I fly DCS in VR with a Pimax8Kx and have been doing so for a little over 1 year.
I dont yet have the PointCTRL device. Its been ordered but has not arrived yet. I hope that I dont have to do lengthy set up for each flight because I’m already having to be pretty careful before each flight to start all of the systems in the right order as it is. Ie → Pimax PiTool, then Voice Attack/Viacom Pro, then SRS, then Steam VR, then DCS.

2.) For a while I had the MFCDs set up but I found that more often then not I was using the mouse to click the buttons in the virtual cockpit rather than clicking the real buttons. As you may have discovered once you figure out where they are its not too hard to reach out and push the buttons even if you cant see the MFCDs. However after removing them I found that I didn’t miss them. There is only one button in the A10C left MFCD that I find myself reaching for.

3.) Viamcom can be brilliant but it does take practice and I’m still trying to perfect the configuration for how it plays with SRS and DCS. I think if its configured properly and you know how to use it then the experience is incredible, however its a big mountain to climb. Using it with the AI RIO in the F14 is pretty cool though, and there are some kneeboard cheetsheets that help you with some of the commands.

4.) I dont run FPS all of the time for the reasons that you stated… it just gets in the way. However I do use it for testing.

This whole thing has been a big learning experience. In real life I don’t know anyone else who is into SIMS or VR so every little problem is an effort to solve.

I am also waiting for PointCtrl. I don’t have any MFCD device. Hopefully PointCtrl with virtual cockpit is enough.

The developer of PointCtrl mentioned on his Discord server that he might tweak /update it in the future so it can be used with MSFS. That would be great if actually happens.

I don’t have Viacom. Only Voice Attack. If you don’t mind yelling F1, F2, etc. to select the radio menu options, it’s really useful enough for me. Of course I don’t know what I am missing without Viacom. But as other mentioned, seems like quite a learning curve. Already enough to learn in DCS.

My VR workflow is to double-click the icon for the sim I wish to play.

Yeah, I don’t bother to launch SteamVR anymore, since that happens automatically now. So mine is potentially down to 2 clicks if I skip @SkateZilla’s Updater (blasphemous) .

I’ve only had and been using VR for a tad over a week now-most of which was testing, setup, testing, and setting back up.

It was all completely worth it, today I’ve flown ~6 hours in DCS with great graphics, smooth frames, and great immersion.

I do not use VR controllers, HOTAS & mouse only. I still have a couple of administrative keybinds that I need to migrate over from the keyboard.

I have not used any voice programs (aside from SRS) thus far, but plan to try VoiceAttack.

@Whiskey_two it just gets better. In three years I’ve put in at least 1000 hours. The only 2D activity I’ve had since has been the rare moments with the xbox and extended sessions with Falcon BMS. Otherwise it’s been VR all the way. I use it mostly for blowing stuff up like everyone else. But I also use it to supplement my real flying, both personal and professional. And I am far from alone. It’s so real I occasionally have moments where I think I am in the real helicopter and conversely, just today in fact, I squeezed the spot on my throttle where the zoom button would be on my HOTAS to get a better look at a nearby glider.

Thanks for the info everyone. fpsVR is now behaving somewhat. I have it ‘locked’ to the bottom of the view area and I can turn it on and off (had to remap the keys because the defaults are too hard to hit with one hand :-). I would like to get it’s display a little lower and out of the way - I find it is right in front of the stick in the A-10C, and that’s not a problem, but I can’t see the switched behind it (TCN, ILS, etc).

I was trying to get PointCTRL working again but I ran into the WMR mouse issue and removed it all until I could figure that out and make sure it was not PointCTRL (it wasn’t). Going to try to set that up again tonight and calibrate it again. I really like being able to reach forward and push the buttons on the MFDs (my logitech MFDs) while flying. Hopefully I can get through the somewhat weird documentation on set it up again.

Viacom/Voice Attack: I have it installed but I keep forgetting to start it. That is next on my list.

Vaicom is awesome once you learn it. I find putting the keywords on the knee board really useful.

Vaicom is awesome once you learn it

Agree. It’s a must have for me anymore. Setting it up might be simplified.

Well poop. My PointCTRL device had a Micro USB incident. I was having an issue where the device was not being detected correctly by Windows 10 (long story but after trying a different cable, it detected it properly). I bought a nice quality replacement cable, plugged it in and … yes! It was working again. I didn’t go into DCS or anything as it was running late so I left it until the next day.

Next day arrives and I decide to do a little MSFS2020 and the mouse is messed up. Like, there are phantom signals making the mouse behave erratically. Turns out (I think) that the PointCTRL camera was seeing a light in the room and trying to react to it … so I decided to unplug the device and continue flying. Little did I know that in unplugging it, it would pull the entire USB connector off of the PointCTRL circuit board.

maybe try talk to Miles, the seller/manufacturer, on Discord? He seems very responsive and helpful. There seems to have been incidents like this.

Don’t think PointCTRL can be used in MSFS yet.