We have a Boeing, the great satin topic, so how about Robinson HC?

Apparently, I was misinformed about the safety of Robinson helicopters. I thought that they were some of the the safest helicopters made due to the simplicity of their rotor design. Not according to this LA Times article from 2018. That thin aluminum fuel tank is especially scary.

I know that we have at least one member who was recently flying an R22. Your thoughts? My wife and I took a ride in an R44 around Lake Tahoe one time, and I was impressed with its smoothness. They are fairly fast, no? 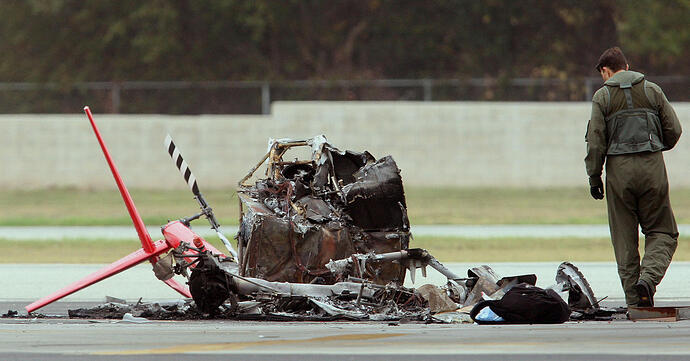 Danger spins from the sky: The Robinson R44, the world’s best-selling...

Safety issues have dogged the Torrance manufacturer over its 45-year history. Both the company and the FAA have been slow to address the problems.

IIRC when you purchase a Robinson you have to go to their factory to learn about all the unique and specific ways they can fail and kill you.

I know that we have at least one member who was recently flying an R22. Your thoughts?

Yes…petitioning @smokinhole to come back and enlighten us! I still think the Schweizer S300 is a better looking helicopter…

If that matters at all…

Oxford CSE used Schweizers when I worked their on fixed wing. They kept crashing. They were training middle eastern students. They would have been my choice. Very robust crashworthy helicopter.

jokes aside, its simple helo and it sells well, but there are shortcomings for sure.

that simplicity of the rotor system is, at the same time, its weakness. its prone to mast bumping.

other weakness is mentioned construction of fuel tanks mounted inside the fuselage.

definitely for basic training and ‘crashing’ (hard landings) S300 is much better suited helo imo. I am FI on S300s.
better construction from top to bottom imo - three bladed rotor system, fuel tanks mounted outside the fuselage (if we can talk about fuselage), shock absorber dampened skids.

e.g. we have one S300 after full autorotation (engine malfunction) in our hangar atm. not ours from other flight school. but that helo absorbed very hard touch down, right skid collapsed, the rotor blades collapsed and cut the tail. but the crew went out of it without injuries. very lucky, but at the same time very lucky that it was S300 I would say.

Having flown in R44’s a bit, I’m a big fan. Are they safe? As safe as the pilot and operating conditions they’re flown in. Do they have limitations? Sure, but every aircraft does. The primary reason for their success is their simplicity and cost effectiveness. I think their own success has been their downfall in terms of safety reputation, since naturally the more there are operating in the wild, the more likely accidents are. Especially when you factor in the level of experience of many pilots flying the R22/R44, compared to other more expensive helicopters. When you consider that flight schools and tour operations fly a lot of hours with relatively low-time pilots (first rotorwing job?), the number of accidents becomes more understandable in perspective.

Watched this Flying Doodles vidja today about the Robinson 44 Raven II. This lady got her fixed wing license first and then moved into choppers. She even got her commercial rating so she’d feel perfectly comfortable taking up passengers. It’s amazing how she can just land in her friend’s yards to take them where they need to be, real fast.

Well, fast being a relative term when speaking of helicopters…

Don’t the R-22s have an SFAR applied to them?

Don’t the R-22s have an SFAR applied to them

Yes, I’m still here. This forum is too entertaining to walk away from for any length of time. (BTW, the removal of DCS and IL2 has been a godsend. Geopolitics aside, I was mostly spinning my wheels with both games and am thoroughly enjoying this break.) Yesterday, I nearly collided with a Warrior. We missed by maybe 75 feet. It was by far my closest shave in my 35 years of flying. I won’t get into the specifics, but it was entirely the other guy’s fault (of course!

). To avoid the collision, at the instant I saw the Warrior (who was overtaking, climbing and crossing from the right), I had to dump collective; nearly all of it. A few months ago my instinct might have been forward cyclic–and that would quite possibly have been fatal. Fortunately, I am well-read and decently trained and my reptilian brain had the wherewithal to resort to a helicopter impulse instead of an airplane one.

That fatal cyclic push is probably the Achilles Heel of the Robinson. But it isn’t unique to the brand. Any helicopter that incorporates a two-bladed, semi-rigid rotorhead is subject to mast-bumping at low g. The designers of the original Huey and the ubiquitous Jet Ranger all stuck with this concept despite the drawbacks. Bell recently introduced a follow-on to the discontinued Jet Ranger called the Bell 505. It is a very nifty little machine incorporating a slew of advancements and improvements. The one thing that is totally unchanged from 40 years of Jetrangers is the most important part: The rotor system. This shows how proven and economical the design is. Frank Robinson adopted this concept in the '70s when he decided that there just might be a market for a lightweight, economical helicopter for the small businessman with some disposable income. The R22 wasn’t designed as a trainer. It was designed to give the gentleman an alternative to his car to get him to his business, dealership or jobsite and capture some money-value of time. Frank was a genius. His rotorhead differed from Bell’s by incorporating a 3-way hinge. This hinge allows the rotor to cone as well as teeter. By having the hinge take on the coning function so that the cone forces aren’t totally applied at the blades, Robinson could use a lighter, simpler blade.

Anyway, with 40 hours in helicopters, I am in no place to dispute the article. There is no question in my mind that the 300CBi is a better machine. But it is also more expensive to maintain. The -300’s rotorhead makes for a safer, more stable, helicopter. But it is complicated and is constructed with a host of life-limited parts. Bearings are $9000…Apiece! Robinson designed their machine to be replaced all at once at 2200 hours. This is why you can go on Barnstormers and find R22’s with 2150 TTAF for $40k. Because they were designed to be worthless once overhaul time has arrived. Which approach is better? I don’t know. But the market says “Robinson”.

The R44 suffers from being the machine of choice for, frankly, people like me. (Well, not really me but maybe “me” plus a million or two in the bank.) People like me who “think” they are helicopter pilots because they’ve finally managed to hover within half a football field but who have no concept of how little they know. The internet is filled with some fairly funny (non-fatal) R44 crashes where pilot-after-pilot fails to realize that a sudden stop with a tailwind is not going to end well. There is nothing unique to the 44 that makes it susceptible to this sort of accident; but there is something uniquely amateurish about 44 owners. There is another Robinson called the R66. It is almost entirely identical to the R44 except for the engine, which is now a turbine. Even with the amazing new Bell 505 now in the market, the R66 still sells. Why? I don’t know. The Robinson is a touch south of $Million where the Bell is a touch north. Maybe it is just price. But I think there is more to it. Maybe it’s that Robinsons are simple, proven and easy to maintain.

I had not heard of, and cannot dispute, the part about the fuel tanks and mast “chug”. I do know that all new R22’s have bladders inside the aluminum tank shell. And all older helicopters have been retrofitted at overhaul. It must have been a big deal, or we would still have some aluminum tanks out there. The mast chug thing sounds scary as @#&t. So, yeah, it seems to be an imperfect machine that somehow still enjoys market success despite the availability newer competition.

Here is a hint that might partly explain the continued success of Robie versus Enstrom, Sweizer and Guimbal: 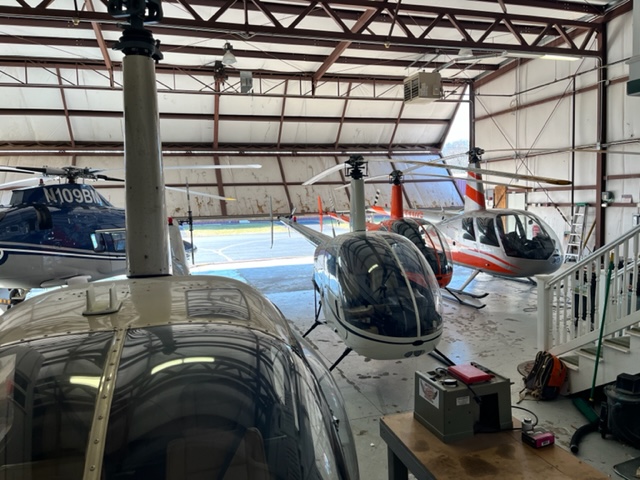 Thanks for your input @smokinhole. Your thoughts are interesting, especially forward cyclic vs dumping collective as it relates to rotorhead design. And the fuel tank bladder retrofit has probably mostly happened since the article was published. That Bell 505 looks sweet!

Edit: I thought about uninstalling DCS, IL2, and not using my Virpil gear, but since all of that has long been paid for, including a beautiful handmade brake lever and shifter from St. Petersburg, I’d just be hurting myself.

Turns out I am wrong about the bladder. The R22 POH Limitations section says “Fuel tanks without bladders should no longer be in service.” I took that to mean that all currently helicopters do have bladders. Turn out that the R22 I flew today, “VG”, is the only helicopter at the school that does. The Service Bulletin allows the operator to wait until overhaul. Who cares in the scheme of things? But I’d rather not spread bad info.

I will fly JetRanger instead of R44 anytime

I am just spoiled I think.

Regarding the cost-effectiveness of anything in helo world - ‘safety first’.
But we know the world we live in. Economics dictates almost everything despite ‘safety first’ stickers are all over the place.

Regarding the mast bumping. Bells dont suffer from it that much. We can debate the different mounting of transmission, higher empty weight or whatever.
And despite it is fact that many incidents and accidents in Robinsons were caused by the lack of skill of the crews there were accidents where even an experienced crew found death in the machine because of mast bumping.
There was at least one case in NZ iirc where the cause is to believed to be the turbulence and the higher speed of flight in it.

As you mentioned there are some bulletins which are aimed at safety oc, but they are slow in implementation imo like ‘you can wait till overhaul’ meaning that ‘safety first’ oc, but right after economics.

sudden stop with a tailwind is not going to end well

this can be very easy to try in XPlane for example

there is something uniquely amateurish about 44 owners

Agree. And I think it is not only 44 owners. I think that the common thinking is ‘if it flies and is small an cheap than it is simple and easy to operate’. Imo it is usually the other way around.
Definitely big and complex flying machines require complex skills to operate.
But there is always the middle ground where one can find not that demanding machine which can provide reasonable safety in the environment in which it operates.

But this middle approach isnt necessarily cost effective in comparison to the simplest solutions.

I mean, there is nothing wrong with this approach. What I wanted to express is that many times people just forget that even these simple solutions requires lot of knowledge and skill.

And forgot to applaud your collective ‘defensive maneuver’ @smokinhole ! It took me personally some time to fly helos not like fixed wings in particular situations.

The more I learn about helicopters, the crazier the concept becomes. I love them more and more, yet I trust them less and less.

I think your enthusiasm is instilling a love for heli’s in a lot of people here at Mudspike @smokinhole. Yesterday I watched a black JetRanger cruise by low level and smooth as silk under a clear blue sky. It’s just awe inspiring.