A side effect of being a pilot is that you also aspire to be an amateur weatherman.

Anyway, interesting to see that deep digging trough of arctic air coming down…that is a pretty impressive shot of cold air. Guess it snowed quite a bit in Colorado and Wyoming - you get any in your area @WreckingCrew?

I finally broke out my jacket and sweatshirt to put in my flight kit just in case. Hard to believe I’d need it after pouring sweat in Houston yesterday…but maybe… 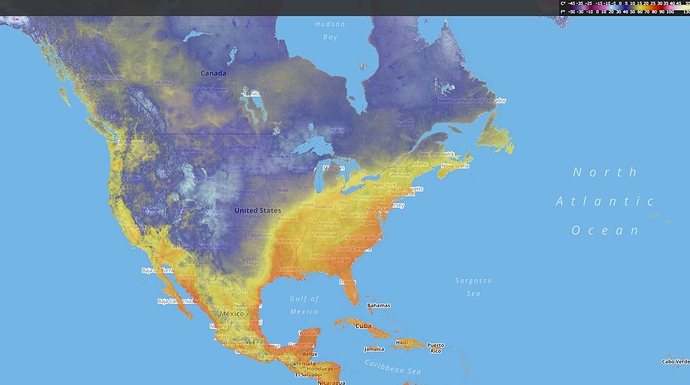 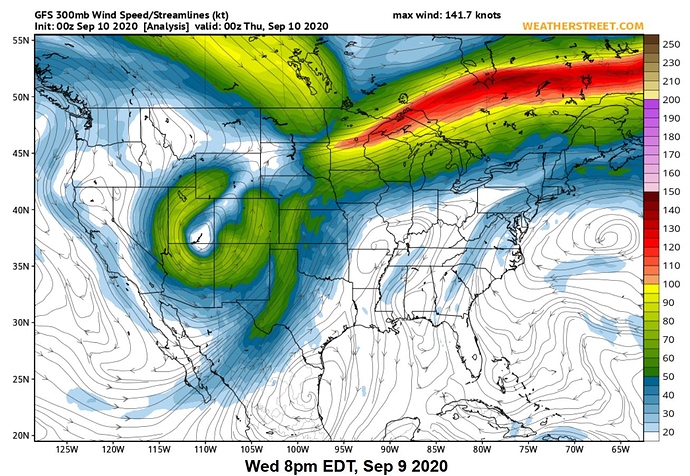 I worked a few summers at Environment Canada in the weather office as a summer student. The few things I learned there was that there was a lot that goes into preparing a forecast and that the farther out, the less predictable. It was quite interesting though.

I also learned about the bias that they build in to their forecast. If there was any chance of rain, snow or whatever, it was put in. The number of calls that they would get from irate people who had started to pain fences, or what have you, was really large. So Environment Canada errors on the side of caution. The Weather Network up here in Canada … they error on the side of hyperbole as that sells more views, and therefore advertising.

It is really interesting to look at the different weather models…particularly as they get out in the 3-5 day area and how they come up with different things. The Euro, CMC, GFS…they are all pretty cool to look at. This site has a great way to look at the models (you can change which model you are looking at, change the model run time, change regions…)

The GFS right now has an interesting long term run that takes a hurricane south of Cuba and into @Magnum50’s house (LOL…hopefully not)… The long term models are not very good, but getting better. And within 3-5 days they are getting pretty good…

Literally - TWO WEEKS! Haha… (you can see the forecast hour: 336 hours from now! Not very reliable)… 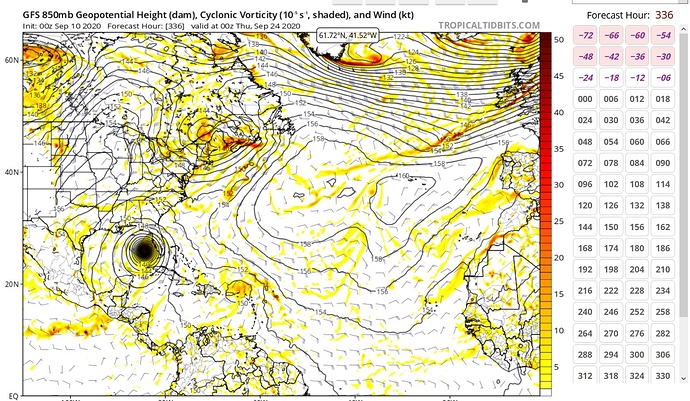 Not to concerned… they say it should turn North or at least be cut down by wind shear… I was born and raised in Florida, if it’s not a 3 or higher, I don’t even blink.

BTW, 3 years ago today, got a direct hit from a 5… worst one I’ve ever been through. Erma.

Yeah…that is a super long term forecast, so I wouldn’t put any stock in it until it is 3-5 days out. I’m always amazed how quickly some storms can ramp up from disorganized to category 3 or 4 in 24 hours.

Then Wednesday morning at 30º -

We are in north central Colorado, around Longmont.

One of the interesting things that I heard recently was the impact that COVID is having. With Air travel reduced, the weather models have lost one of their data inputs from pilots. Apparently, those weather reports from pilots make it into the models and provide additional detail. Since that is missing, the weather forecasts have begun to lose some of their accuracy.

It is interesting to me how so many things are tied together in ways that may not seem obvious at first.

Yes, I’m sure there is quite a bit of automated data gathering from aircraft data generation. With ADS-B all kinds of information is going out for open collection and I wouldn’t be surprised if big airline companies had agreements with weather services to provide data since the return on that data is better fuel routing and forecasting. Definitely a win/win relationship.

It amazes me how accurate the forecast winds can be, even over the ocean. As you mentioned though, every aircraft that is oceanic equipped with CPDLC is automatically reporting weather data at each reporting point. I’m not sure about ADS-B/C but it wouldn’t surprise me.

Interesting that the GFS has that low off Florida moving across Florida, deepening fairly rapidly in the Gulf and moving into Louisiana as a bit of a tropical depression…

Forecast for 2AM Tuesday morning: 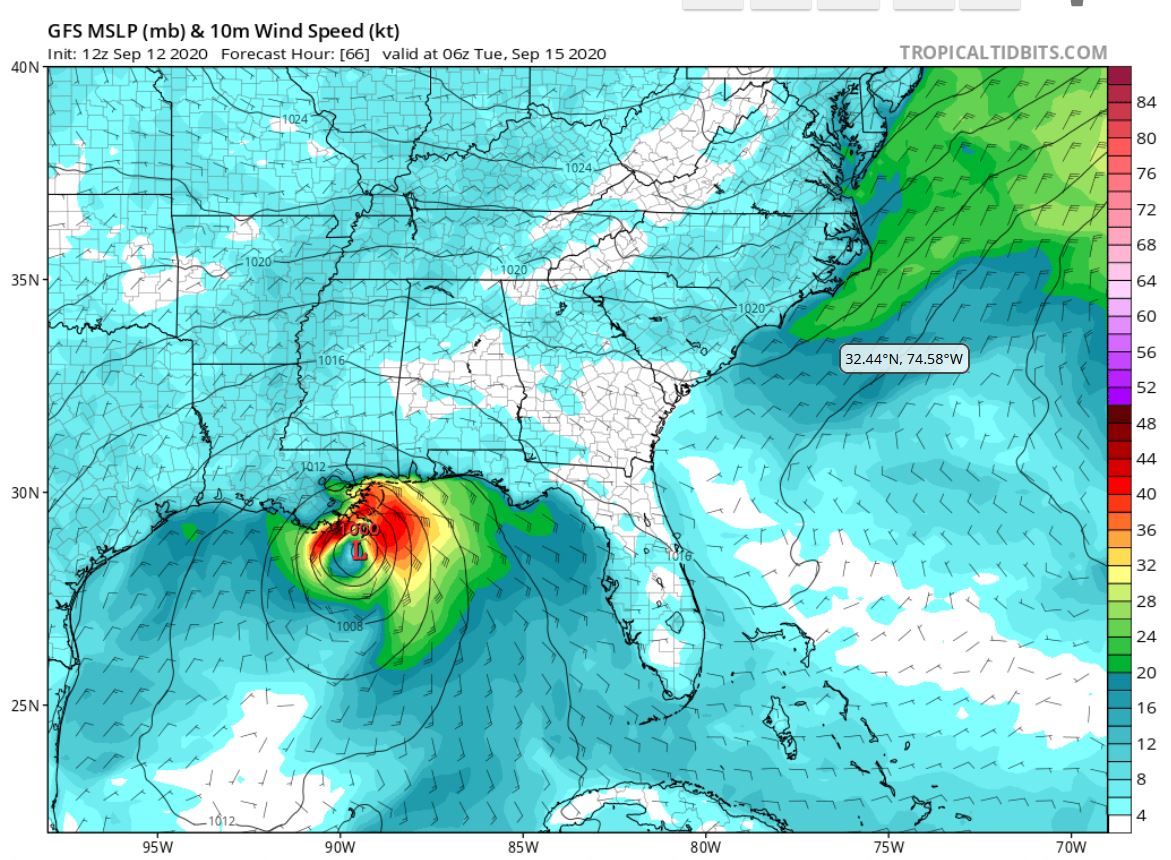 One of the best meteorologists in the United States (Alan Sealls) breaks it down…this guy is fantastic…(although curiously, he calls Bermuda the Bahamas in this video…LOL)

Apalachicola on the north side of the cone forecast @jross… 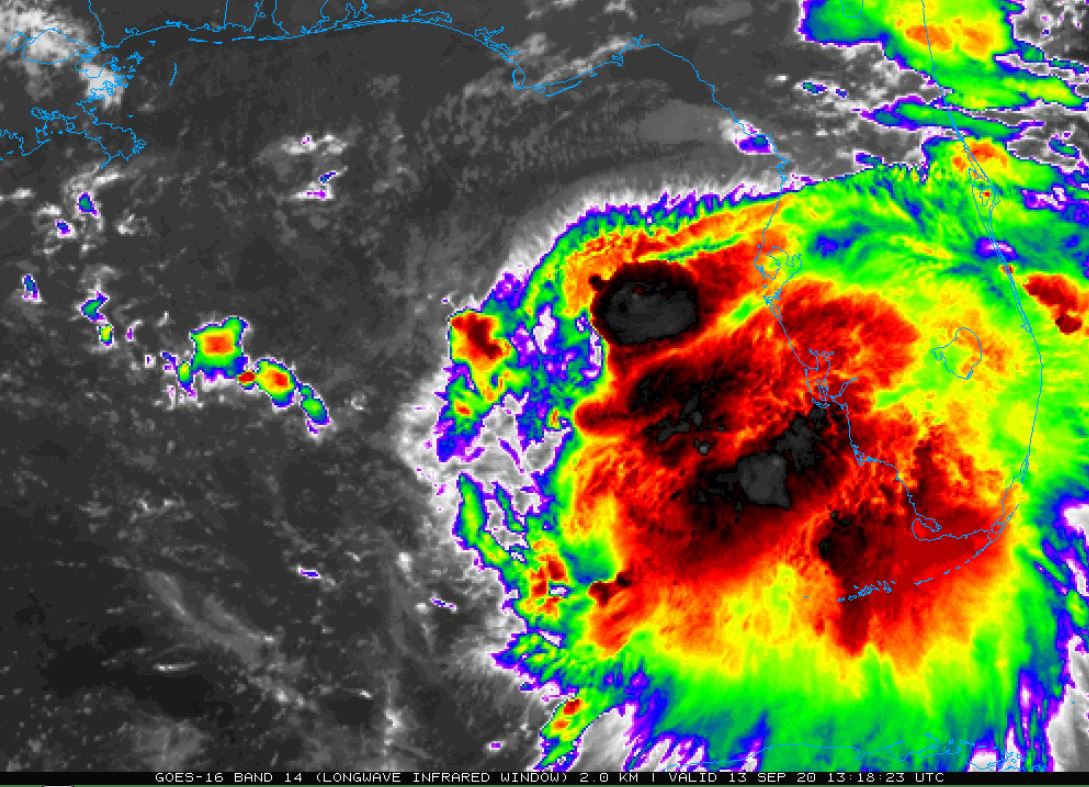 Ya, non stop rain…local flooding… but I’m good, I planned ahead. My small home is my castle, now with a moat on 3 sides, lol, think that’s what is is called. Just glad it developed above us, glad not LA.

Now Sally is a hurricane…with rapid intensification according to NWS…

Data from a NOAA Hurricane Hunter aircraft investigating Sally indicate the system has rapidly strengthened to a hurricane, with maximum sustained winds of around 85 mph (140 km/h) with higher gusts. The estimated minimum central pressure is 985 mb (29.09 inches).

A Special Advisory will be issued shortly to update the intensity forecast for Sally.

All I’m saying is enough is enough… I’m suppose to start my Brotherhood ride around the country Oct. 4th… already delayed it from earlier this year because of virus. 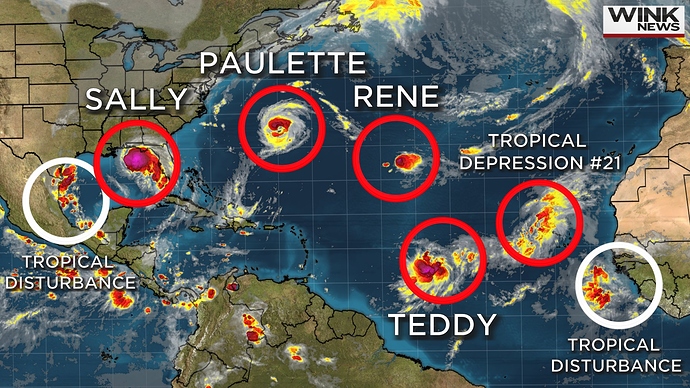