Today was just like any other day, except that we had this little event that only comes along every 99 years or so. I gave the millennials in my company the day off, quietly knowing that my partner and I would think it pretty funny if we told them now they had to work on Labor Day. Thus, I didn’t jump in the car at 0300 and head to North Georgia to the cone of confusion, AKA the zone of totality, like a bunch of crazies did this morning. I headed to the office.

Anyway, partial eclipse began at around 13:06 local (EDT), with the maximum point at 14:36. I brought my drone in to work thinking that I would taking it down to the local park and get some sort of eclipse over Atlanta photo. That is until my business party reminded me that the sun will be pretty much straight overhead. No drone. Chick-fil-a instead. On the way back from lunch and at about 15 mins into partial, the eclipses evil powers already had struck. A water main had ruptured outside of our office and the parking lot was now about a half a meter deep in muddy water.

This so concerned me that when arriving at home to work remotely, I immediately fashioned a time honored protective device. 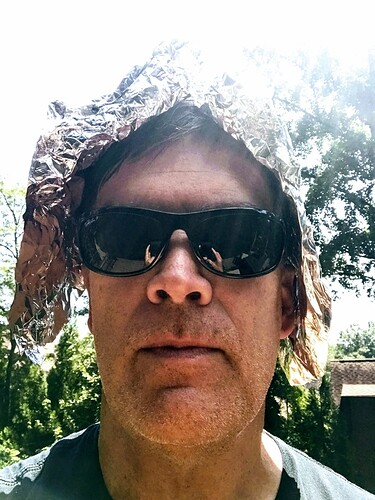 Unfortunately, I must have completely reflected all of the cosmic rays back into the innumerable Cosmos, because even though Atlanta falls just outside of the cone of confusion, we were still supposed to have 97.5% eclipse. This is what the remaining 2.5 % of the sun’s rays looks like using my iPhone shot through my Raybans. Imagine that people are driving around with their headlights on, yelling, and the occasional fireworks can be heard. 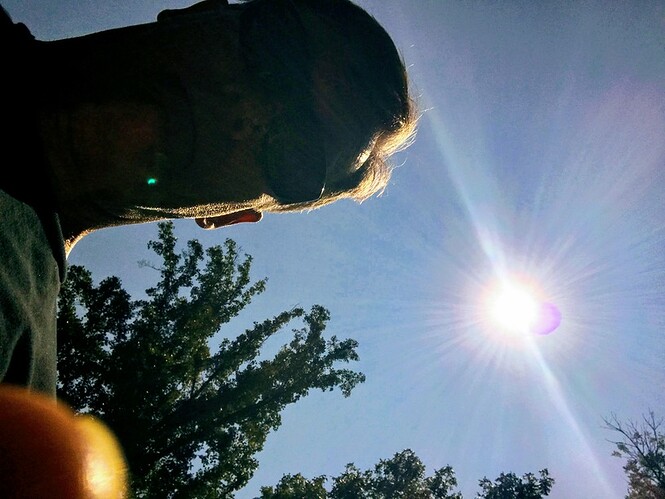 So, I’m hear to tell you that if you either felt guilty that you that didn’t get sucked into the swirling eclipse void, or were a wee bit remorseful that you didn’t load up the family truckster and head toward the cone of confusion, you didn’t miss a whole lot.

It was about 75% here in the Austin area. I was going to get my imaging gear out but in the end I opted for a simpler approach - iPhone and solar glasses. 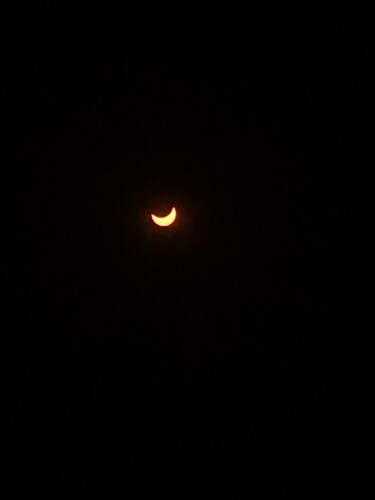 About 85% coverage here. Went for a dog walk, it got ‘slightly dark’ about 10:20 ish, birds sort of let out a few twitters with that 'Is it really time for bed again". Then it got light again.

We built a Cornflakes box pin-hole camera to view. It worked out ok, in that no-one went blind (which was its real primary use-case scenario for me and really the kids). Here’s a phone shot that isn’t very good (sun refracted down the two blobs, you can see the Moon doing it’s thing): 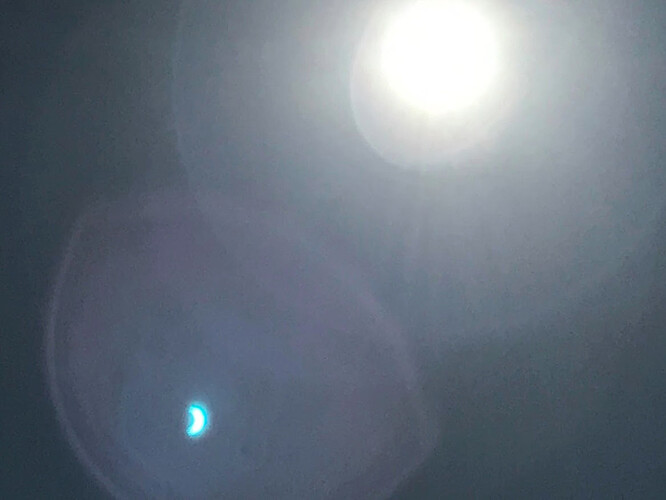 Cornflakes win! (It looked better than this, honest, just hard to photo with adjusting smartphones) 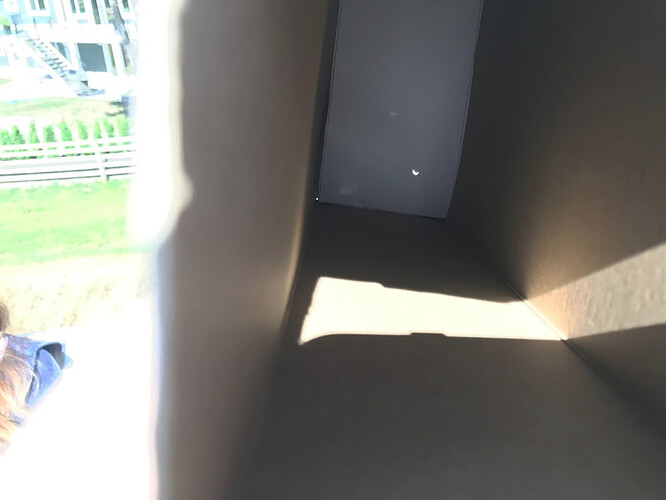 Hard to tell (as phone lightens images a lot), but didn’t actually get as dark as I thought it would. 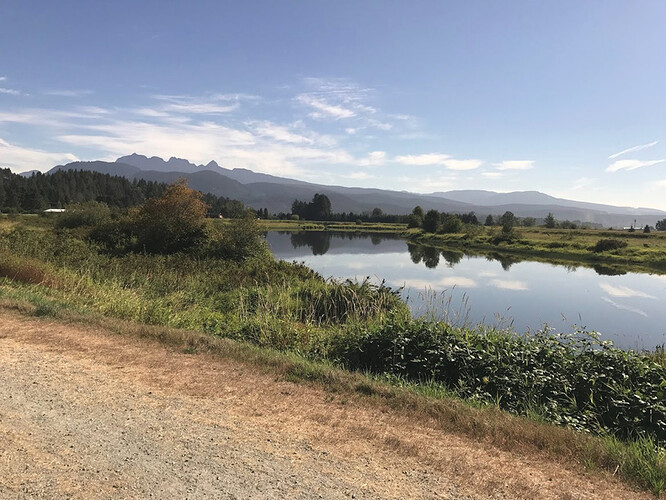 I lucked out and live at exactly the right place. I had seen close to total before but never fully total and never with a clear sky. Oh, and never without a full time job to pull me back inside either.

This was really cool. I’ll probably be one of the ‘crazies’ that goes chasing it next time. 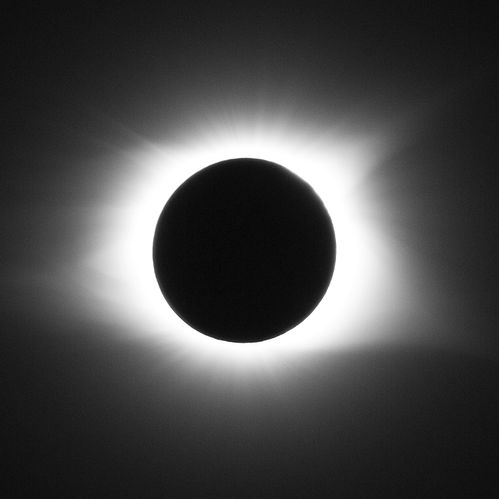 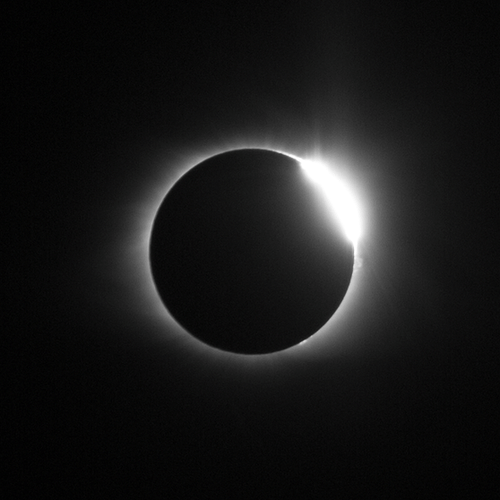 WOW! You nailed those shots! What equipment did you use?

Yes, nicely done @bunyap2w1. I knew that one of you Mudspikers would have the savvy to get the job done. I’m wondering about the gear and focal length. 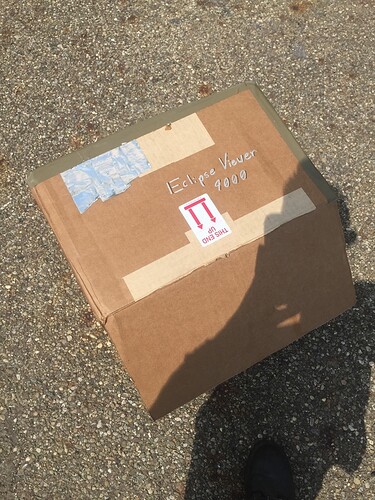 shame it was not … 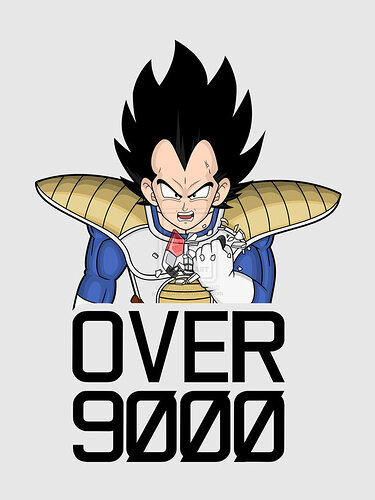 The best part was it dropping to about 85F here at the peak.

While outside I couldn’t really tell a difference as it approached the 85% coverage we got, but it was so dark inside you needed lights or to open blinds that are usually perfectly set for daytime.

The only change I noticed outside was I could take my sunglasses off. Usually, I need sunglasses on from about 5 minutes after sunrise to possibly 5 mins before sunset. Here it was, a cloudless sky, 3 PM…and no glasses needed!!

However, even reflected on glass the sun looked like a round disk. Only thru the sun filter did I see it shrink to a Cheshire Cat-crescent. I tried taking a pic but my old cell phone camera could not focus on it thru that same filter and it was just a disk again.

I also saw a solar eclipse back in 1999 and it is really astonishing how much you need to cover the sun in order to even notice it got darker.
The sun is bright. Very bright.
I am a hobby astronomer and watch it through a telescope now and then (with a proper filter. Don’t try that at home), and it is fascinating. People don’t get how big it is and how much energy it sends our way. We have numbers to write it down but it is hard to really understand it, it is outside of every scale intuitively understandable for a human.

Some of you guys were actually using those pinhole box things?

You can actually use any sort of binocular or scope/telescope to project an actual (reverse) image of the sun onto any surface. I forgot to bring something to use that day so I made due with my compact bino to check up on the sun and make sure everything was ok 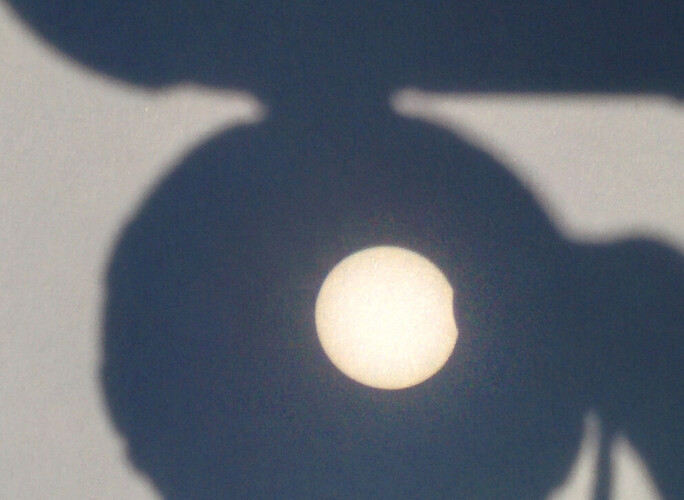 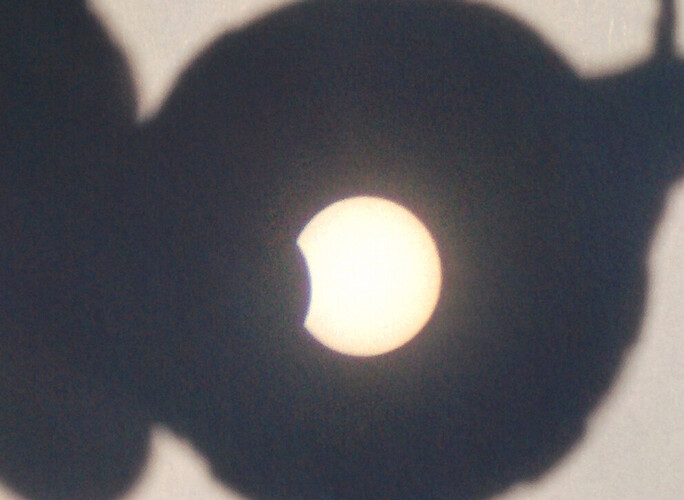 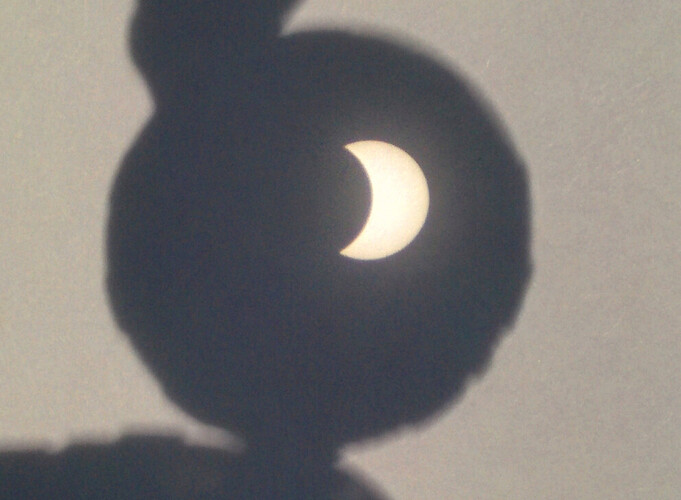 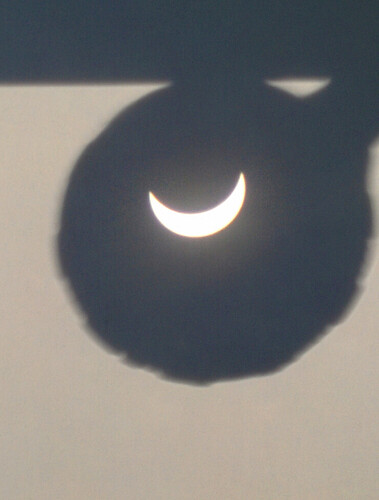 Any nicer telescope/binocular can actually project a fair sized image of the sun onto a screen where sunspots and other objects on or in front of the sun are very visible … fun project to do with the kids as well. Something like this (under a sun viewing shade of course) …

Solar imaging is pretty neat. There are a number of ways to do it. I should have set up my wife’s Hydrogen Alpha scope for the eclipse, but I allowed myself to become distracted and left it too late. Anyway, l’m looking forward to the 2024 eclipse, where totality will pass right over my house. Maybe an excuse for a Mudspike gathering in Texas! 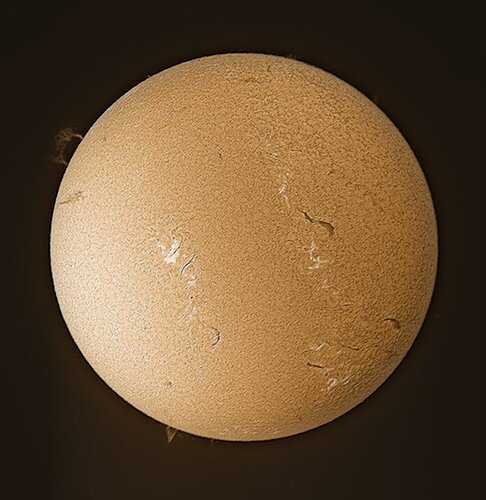 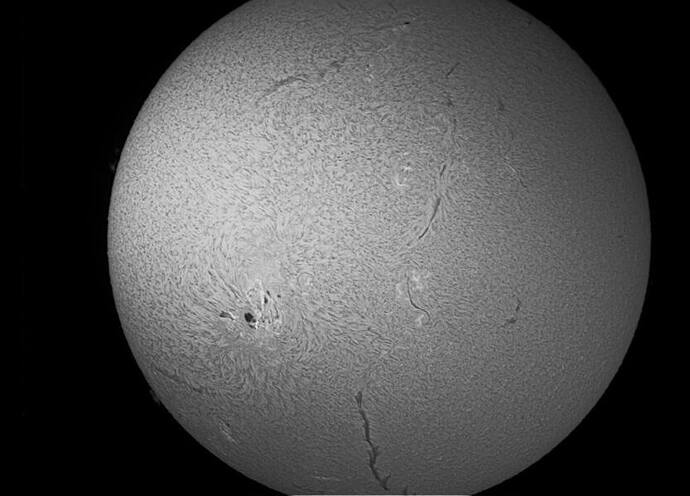 I kinda feel like kicking you a little bit too. Just a li’l bit where you remain conscious.

So we had a front row seat… We paddled deep into the Smoky Mountains to go camping for this event. While the surrounding communities were being flooded with tens of thousands of extra visitors (and traffic snarls), we managed to secure a back country permit and saw the eclipse with only one other person in attendance (a fellow camper who we rapidly made friends with…). We also lucked out on the weather since Asheville and some of the surrounding areas were getting scattered clouds that obscured the views for some people.

We would be in the path of totality…a nice feature…we camped about six miles up Hazel Creek in Great Smoky Mountains National Park. I snagged the permit on the exact 30 day prior availability somehow…(stayed up all night to make sure…LOL…) We are where the red dot is…just north of Fontana Lake… 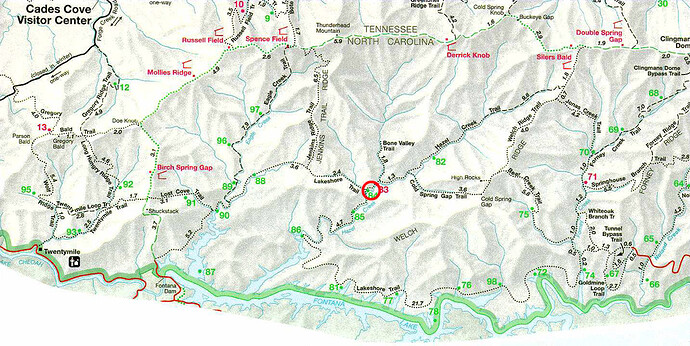 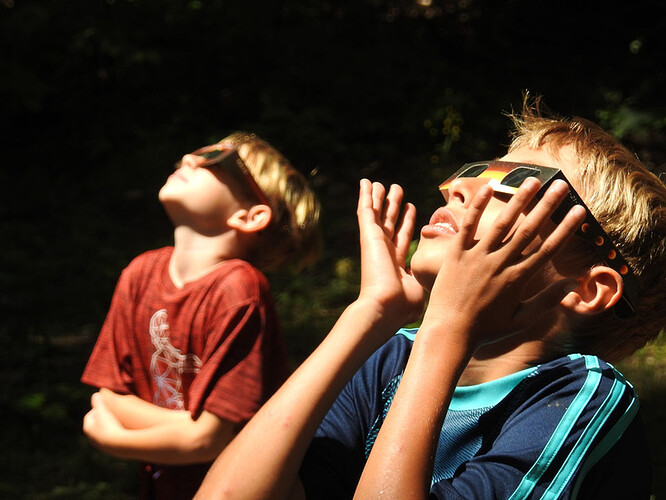 One of the more interesting things to me was the amazing quality of the shadows during the eclipse. Having hundreds of trees around us, each leaf acted like a pinhole camera…so the floor of the forest was just a mass of crescent suns as light filtered through the canopy. It was surreal looking… 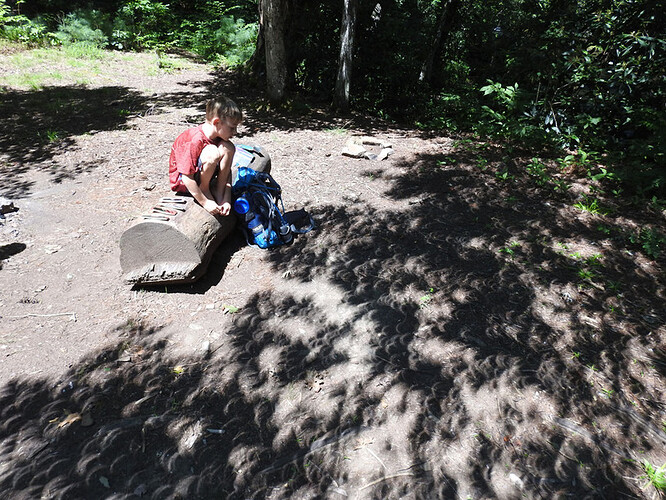 Once we got near totality, I was able to snap a few images with my Nikon P900… 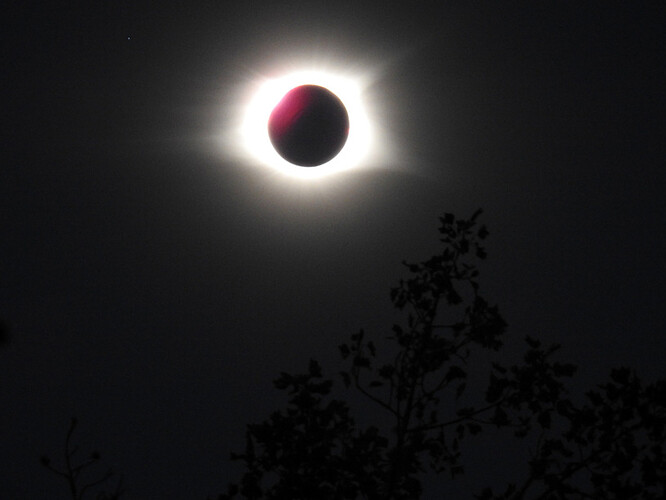 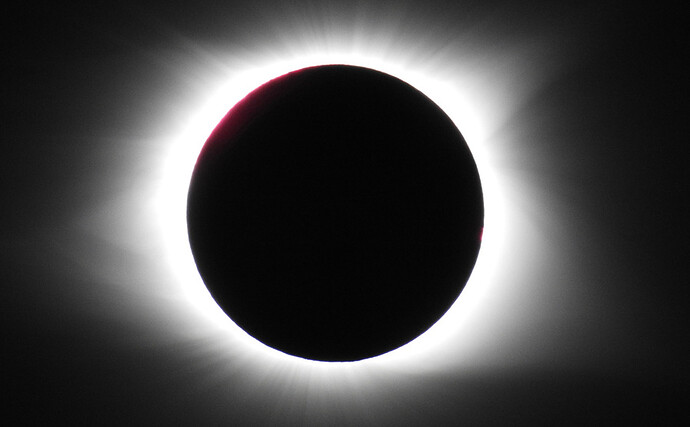 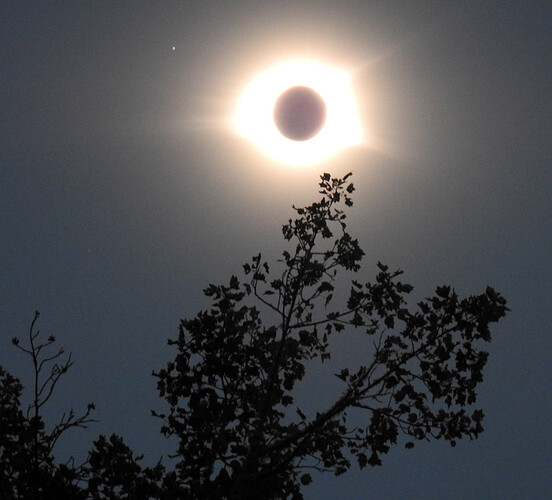 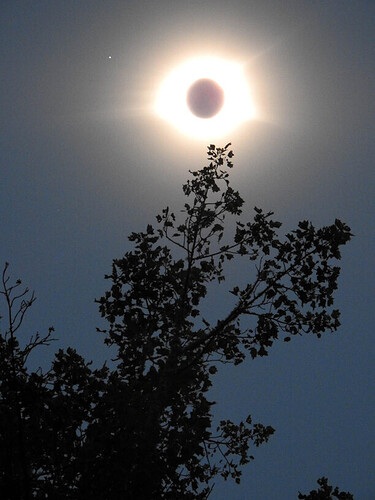 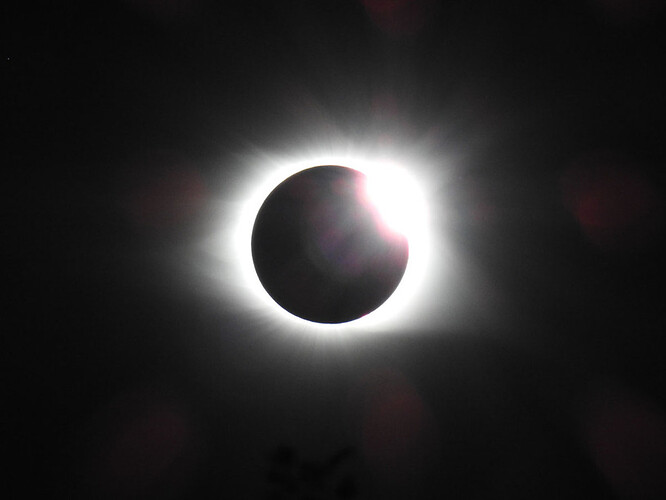 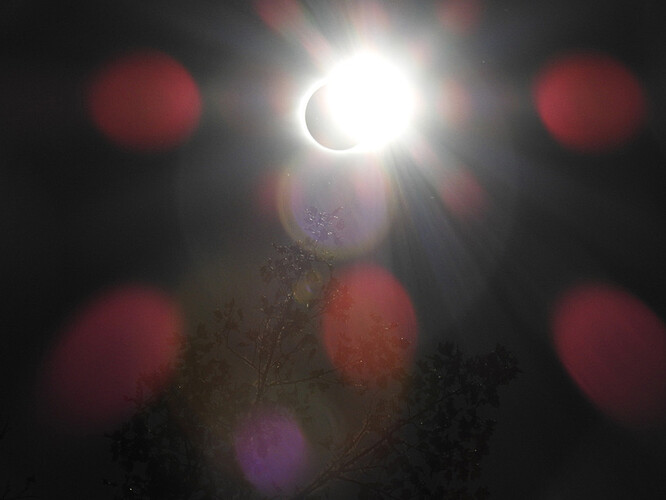 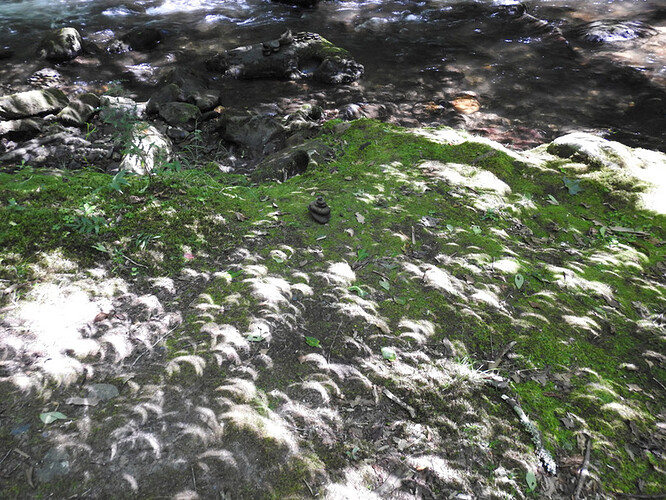 It was way more impressive than I though it would be. The quality of the light was just surreal. All of us are used to the “golden hour” of fading light at sunset…and this was a similar look, except without the long shadows and with the sun so high, it had a really bizarre lighting effect. And the totality was just simply awesome. What is amazing is how quick it goes dark compared to 99% eclipse and 100%…it is like really, really fast (like 30 seconds). For the few minutes of totality, the tree frogs started singing, and for about 40 minutes after the eclipse, the temperature continued to drop…it was really cool.

Amazing. Looking forward to 2024 when it comes to my home town

Outstanding photos Chris! Thanks also for the write up. Those shadows were very interesting too…