Other than clicking on thumbnails with chesticles on them (yah, fooled again!) and not really answering your question as this isn’t a youtube link (man, this reply is going badly so far), I do like to leave this running:

As an aside, ‘Urthecast’ is such an awful company name - it invokes the romanticism of the word ‘urethra’ with the ‘ur toys r u’ moronic spelling disability plague.

Still, nice space views, when the Earth and Sun cooperate. The NASA stream is here too, and at least shows the ISS position nicely:

I use youtube to find new music. I go to a video of a song I like and then commence to click the videos on the side bar to see if anything new that I like pops up.

I use youtube to find new music. I go to a video of a song I like and then commence to click the videos on the side bar to see if anything new that I like pops up.

Yep. I’m guilty of being effectively marketed to by YouTube/Google/Evil Empire.

clicking on thumbnails with chesticles

The thongs always get me. Tyler Durden at work…cutting in that 1/16th of a second of thong and the rest of the video leaves me barren. Bastages.

watching “misheard lyrics” compilation videos, those are videos with parts of songs in a foreign language (such as english) which happen to sound like german sentences.
Those videos are often bad, but SO funny.

ARRR…
And also I need 10 characters.

Some of those fails were particularly cringe worthy.
Every time I see a video with a crane I am wondering when it’s going to go south.

Every time I see a video with a crane I am wondering when it’s going to go south.

LOL…me too. Same with when I see anything towing anything with a cable (ship, truck, whatever). Just waiting for the cable to part and for the whipping cable to do damage to life and limb. I cringe whenever I see footage of people working around cables under serious tension…

Fail videos. Doesn’t matter what kind of day you had, watching a couple of those can make you feel pretty good about yourself.

The same with Cops on TV. If you’ve had a bad day, just remember you haven’t been featured on an episode of Cops.

I live in NE Scotland and for most of my life worked in the oil rig fabrication yards here and , its been a good living, started work in this industry at the youngest age of 18 they would allow, we built the Jackets as well as topsides for the north sea and am proud to have helped build the replacement for the ill fated Piper Alpha with the Piper B.

This is not one of our Jackets and its certainly not the largest built but this vid does show how they are launched from a barge, you would think all that tonnage of steel would just sink, but nope, every weld is tested and even x rayed for critical parts and the tubulars are air tight and it floats until its gradually sunk to the position its intended to drill.

We did topsides too and built some of the first TLP platforms as well as jack ups, always loved construction and I loved this stuff especially.

As regards crane collapses, have seen a couple in my time but fortunately no fatality’s, this famous crane collapse was a Lampson crane, big Blue as its known as, we had two of those Lampson cranes on our yard for a while for the big lifts at peak times.

But before those Lampson cranes arrived here years later from the American company (McDermotts) who owned the yard at the time we had to build an ad hoc crane for the then current projects big bottle lifts to the top of of the Jacket.

Here she is, we called her Nessie because of the close proximity to our yard to Inverness Scotland and Loch Ness. 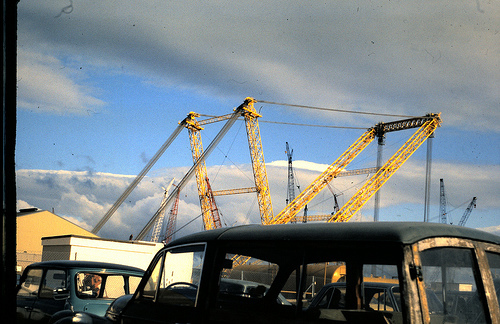 Now these are extremely old pics from the 70’s I’m sharing here, so excuse the old cars and hair ETC, that’s what it was like back then in NE Scotland late 70’s

The incredible thing about Nessie was it was mobile, it could crawl about the yard at a snails pace, but it was mobile.

Anyway, about a week or so later I was on a swing shift that went from about 4PM to 12PM or something, the yard worked 24/7 7 days a week to keep up with rig production and I was doing a scaffolding course away from the main deck assembly building I worked at and our stuff was over, just waiting for time to go to the canteen for some grub and the scaffolding instructor was pointing to Nessie explaining the strength of triangular joints in its booms as we waited for our break … Nessie was doing lifting exercises to get insured by Lyodds of London insurance in preparation for the forthcoming really big lifts we had to do … you can guess what happened next! the damn twin booms kept lifting and lifting and I swear I saw it all in slow motion but it must have happened in seconds, the entire behemoth of the twin boom crane swung over itself and collapsed, it was just the most colossal catastrophic accident I’ve seen in my whole life.

Amazingly nobody was killed, we dragged the crane driver out who was screaming his head off and some of the older guys were trying to keep me back (was just 18 turning 19) because I think we were all expecting grim casualties, will never forget that.

Here is the aftermath of Nessie when she came down.

As regards the ISS Sightings I know what you mean Fearless, when I first learned about them I would go out and look but was plagued by bad weather at first, then one good night it all came to fruition and bang on the button as predicted the ISS came into view exactly where it was supposed to be and it was a good three minute + transit too, totally unmistakable now the ISS is fully built, towards the end of the Shuttle days you could sometimes just make out a slightly smaller light playing catch up and that was the Shuttle on its way to dock with the ISS.