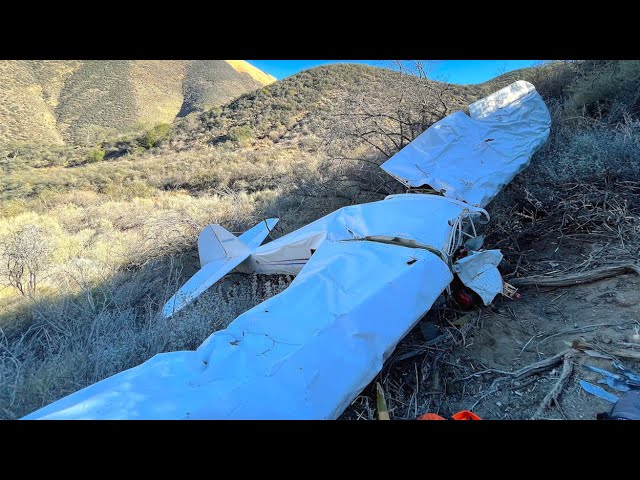 The FAA has confirmed it’s investigating the circumstances of a video purporting to show the November crash of a 1940 Taylorcraft posted by YouTuber Trevor Jacob. “The FAA is investigating this event,” the agency said in a statement issued Monday.... What do people think? An unlucky incident caught on camera or just a premeditated sky-dive for the drama and delicious ad revenue?

They will tear him a new one if they have any sense. I cannot see that being real at all. I really cannot

So far it’s about $100 from youtube, so maybe an insurance scam?

I feel the real victim in this is that lovely old aircraft.

Yep, plus the potential of forest fires, plus the lives of the unlucky people who had to rescue him.

I’m not surprised by anything anymore

That my friend sums up my feelings too. Unfortunately. Or am I just being a cranky old man? (like all those that went before me).

It seemed like absolute bovine byproduct when his ‘engine went out’ and he started manhandling the yoke like that. Also, I don’t think I’ve ever met anyone in a GA bird like that who wears a chute. It’s a good thing he just sooo happened to have one. I’m guessing the touchdown speed can be described as a ‘brisk jog’, too. Judging by the surrounding land, that’s an easy emergency touch down.

And all the while, no maydays? Impressive!

This guy is flying a plane that can land in a large parking lot, at what is probably its maximum service ceiling judging how long he fell for, it could have glided probably 20-30 miles. I have never heard of anyone losing an engine and thinking, wow I should probably open the door….wtf. Also you can see him trying to get the prop to stop when he is pumping the elevator after his “engine failure”. He’s getting very close to stalling but the engine is fine so the prop doesn’t stop windmilling and it takes him a few tries. It’s going to either be found with the mixture knob all the way lean, or no fuel in the tank, maybe mags off too. What a weirdo, also a shame he felt the need to destroy a plane that has probably brought joy to so many people in its long life.

Absolutely correct. It was the apple of many people’s eyes for so long and he felt a need to destroy it for youtube clout.

He doesn’t deserve to call himself a pilot.

Seems fishy. And based on what I’ve read here - I’m not going to click on it - cuzz that’s what he/she wants.

Crash is currently under investigation - https://data.ntsb.gov/carol-main-public/basic-search

I’d like to see the position of a few switches,

that look like a fuel cut off, and he conveniently did not show cockpit footage during the engine failing.

No smoke, no RPM Changes before the die off, just quit, like he turned off the fuel or intentionally ran out.

Could have easily glided that airframe down and saved it,
Insurance companies are in line after the FAA.

Also, I don’t think I’ve ever met anyone in a GA bird like that who wears a chute.

Agree heavily. Very few exceptions, like flight testing an experimental after a major modification, like a Subaru engine conversion

, competitive level aerobatics, or during skydiving operations, which don’t require a commercial license if you aren’t getting paid to fly the jump ship.

And it sure looks like there was either a dirt road or river bed below him with good off field landing options. His actions after engine out were more Hollywood than Pilots Operating Handbook.

Note to “influencer”, don’t try to free yourself from brier bushes with a selfie stick in one hand.

My BS detector went to max.

I’m not much of a skydiver, but I’d almost take riding a plane like that into the treetops over jumping out of it… if there was flat ground nearby I’d stay with it for sure (that said my piloting experience is now a decade out of date… take my opinion as you will).

I’d like to see the position of a few switches,

that look like a fuel cut off, and he conveniently did not show cockpit footage during the engine failing.

No smoke, no RPM Changes before the die off, just quit, like he turned off the fuel or intentionally ran out.

Could have easily glided that airframe down and saved it,
Insurance companies are in line after the FAA.

I had an engine fail before because of moisture in the fuel itself that had frozen on a filter and restricted flow. When I added a touch of throttle, engine just kind of wound down. I glided it back home just fine.

So, some failures can seem like they’re out of the blue, not everyone gets something like this poor 63 year old I know who had his 182’s engine throw a rod in flight. He got down just fine, made the right choices. Destroyed that Skylane, but he walked away without so much a bump AND he maintained responsibility of the airplane until his wheels hit dirt.

Still, I want to see this dude’s engine controls. I’d be willing to bet he just pulled the choke.

Also, I don’t think I’ve ever met anyone in a GA bird like that who wears a chute

Not knowing much about light civil aviation… but could this have been some sort of insurance scam with an old plane …also why wasn’t there a fire, unless has been noted his tanks were empty …

I note that it appears he was unbuckled and the door was unlatched prior to the ‘engine failure’.

Total BS. He will not only lose his license, but should be in jail for recklessly endangering others on the ground, among many other things. What an idiot.