So I got the ‘Window 10 is ready to be installed’ pop-up today. On a gaming PC I did register a while back, when that wee ‘windowy’ taskbar icon appeared. For compatibility I had kept that PC on Windows 7 Ultimate.

Anyone hit the button yet and what doesn’t work? Just blink into your webcam if you are in danger and we’ll send help.

Should I wait for Windows 9 or have Microsoft switched to base 9 numbering? Are all the HOTAS drivers etc all ok. So many questions!

Anyhoo, I didn’t try many games or peripherals with the tech preview thing, so if anyone wants to share their experiences then speak up.

I have had no problems so far with most of the PC’s I deal with … knock on wood. On my gaming PC my Thrustmaster HOTAS works, DCS works, IL2 1946 works and Arma3 works. Overall, I suspect that if it worked in Windows 7 or above (refuse to mention the ‘2’ versions in the middle there), it will likely work in Windows 10.

2 caveats: My 4 year old Lenovo W530 likes Windows 10 but doesn’t want to do any updates successfully and my parents PC, based on the ASUS Z87-A motherboard, is having issues upgrading as well. So there is that. Both will take preview build 10130 but will not successfully upgrade.

For people that are keen to move to Windows 10 then a couple of things worth knowing:

When in doubt deactivate

I went through those, and got momentarily confused so wanted to see if this helps out. For each DCS module use this .exe in each mod/bin directory (general path in screenshot): 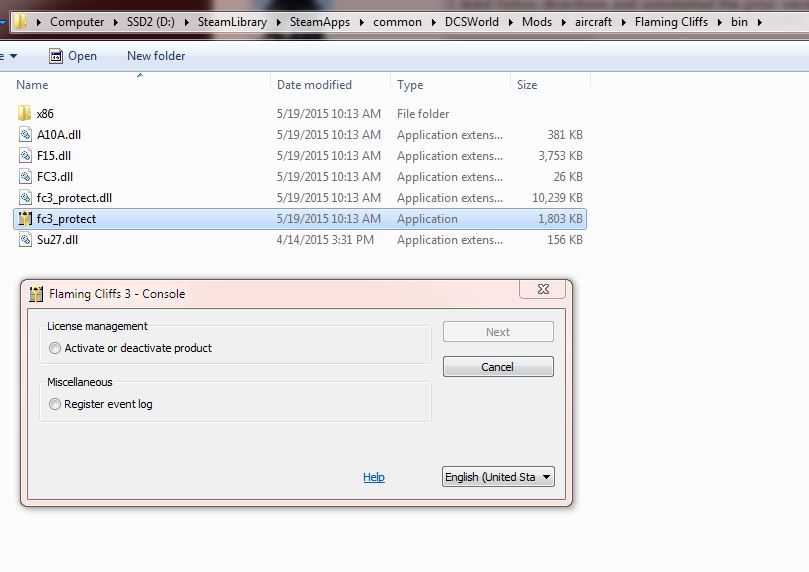 So after hitting the ‘activate or deactive’ then you need to click the underlined ‘deactivate’ text to get to the next step: 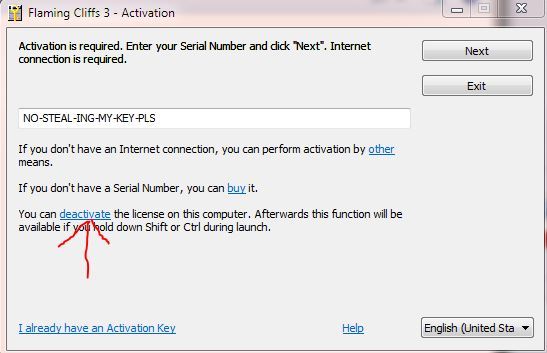 Actually, I hate clicking things. Here’s the text of a .cmd file I created in my base DCSWorld installation folder. There might be a cleverer way to deactivate them all but I don’t know it yet. It deactivates all the modules (that I own, I might have missed one or two, please let me know?).

So what you do is create a ‘dcs-deactivate.cmd’ file with notepad in your default DCS installation directory, copy this text into it, and get a command prompt and run.

Hope that helps someone else

I haven’t made the Windows 10 move yet. For no other reason than I’m just too lazy to go hit that icon… LOL

My casualty report on the gaming PC with winX was pretty light so far:

Update took about 30 minutes, and if I see any more blue screens I’ll probably just reinstall all fresh rather than update in place.

Other than that, perf seems about the same but generally nothing really to get excited about.

Yeah, took me a while to find ‘Lock’ screen too… sometimes I think they just change and move stuff around to justify a new version

So I accidentally upgraded yesterday w/o deactivating my licenses (don’t ask, I clicked the wrong button when I wanted to quickly shut down my PC…). They’re still all valid but I will do a fresh win 10 reinstall when I have time in the next weeks and I will of course deactivate them all before doing that.

No Win 10 ‘casualties’ so far, everything works fine (printer, games, drivers). The OS seems a bit quicker than Win 7, overall I like the new look.

HOTAS WH, TrackIR 5 Saitek Pro Rudder Pedals work just fine, no overall framerate improvements in DCS but I noticed that the random frame drops I had in some situations seem to be gone.

Power management seems kinda broken, in that the screen-saver now doesn’t come on and the sleep mode woke u

As a follow-up to this, and in-case it helps others via Google, I managed to narrow this down and discovered that my Saitek RHINO X-55 HOTAS was causing the issue of stopping the screen saver from coming on. They didn’t cause an issue on Windows 7x64 or 8.1 but 10 seems more sensitive to wiggling devices providing an interruption to power management.

Until Saitek do a new driver (or hell freezes over, and I’ve got money on that first) the easiest thing to do is just disable the device mgr entries under HID when not using them. As that involved clicking (again) I wrote a script that disabled/enabled using DevManView here:

if its still under warranty, maybe you should consider sending it back for RMA? I never had it so bad that it effected the screensaver, so maybe yours is that much worse… for another reason mine is RMA, they are sending me a new stick because the X & Y access died on it suddenly one day… least open a ticket, see what they say?

I might RMA, not sure. It worked ok in Windows 7 and 8.1 in that it certainly didn’t interfere with a screensaver/powermgt, so I might wait to see if the HID profiles for what counts as activity is updated for Win10 or not. The HID change was introduced pretty late in the 10 builds, so it might not even be intentional.

I lost multiple Mig-21 keys and lost another this morning. No other modules gave me any hint of a problem.

I lost multiple Mig-21 keys and lost another this morning

Yep, I lost 2 and then stopped starting it. Looking at the ED forum I think others have the same issue, so hopefully something LN will see.

I reported it to LN, so I guess we will see if they figure it out. Other than that, Win10 upgrade was a breeze.

I don’t think it helps the power config issue but there are new win10 beta drivers for the Saitek stuff here: