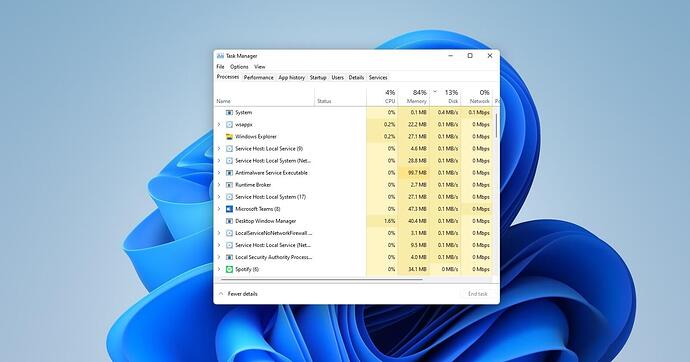 Windows 11 Build 22000.282 (KB5006746) is now rolling out to testers in the Beta and Release Preview Channel of the Insider program and it finally fixes the performance issues previously acknowledged by AMD. Windows 11 is rolling out gradually and a...

Heard about that, next week release I think? on an AMD 5950X system here, cant say I have noticed a performance drop in anything really, but its been measured and confirmed, so its good they are fixing it.

Windows 11 is OK, couldn’t resist upgrading both my rigs to it, but do use StartAllBack utility that is free to use for 30 days, then you pay about £5 for it, this makes Win 11 look like Win 10 that in turn I used a utility to make Win 10 look like Win 7 and so on and so forth, LOL, new Nvidia Win 11 drivers out now too, seems fine on my RTX 3090.

Hopefully there is more to Win 11 than a new skin and appearance, in fact there is, the new OS will take time to mature though, probably.

I do wonder about Microsoft sometimes, but deep down knew they would not, could not stop with Win 10 forever as they almost said.

So long as it works and offers benefits, they can go ahead, its a free upgrade at the end of the day and is just an option for most of us, also and with official win 10 support and critical fixes ending in 2025, thought I might as well get going right now … and as I say, no problems so far, whatsoever with Win 11, other folk do have probs though, teething problems perhaps? But that’s usual, even if Win 11 never changed a thing and was just a massive placebo test, people would report problems, its the nature of the beast

But no problems here on high end AMD and now semi high end Intel PC’s, laptop is older and not up to it, amazing its lasted so long really, so when Win 10 is redundant or lappie is, will buy a new one.

This falls under the same category as when they rearrange the grocery store. I go there to buy the same food as always (more or less) and all of a sudden it’s in another aisle and that aisle has been moved.

I don’t get it. Windows 11 was released to the general public last week.

The upgrade is supposed to be available in Q1 2022.

Yet my brother updated yesterday to 11 while retaining all installed apps and settings. Then he read about the AMD thing and rolled back with no issues.

So what is it now? Is the update version ready to use or will it be in 6 month?

Poneybirds, its all a bit of melodrama my friend, yes there is an issue, its an issue I cant detect on a modern AMD rig, but it does exist apparently and will be fixed next week, not next month I read from reliable sources, its all a storm in a tea cup.

Perhaps I’ll get an extra 1 FPS in Doom Eternal totally maxed out once fix is released, people are tribal by nature, one camp or the other, one team or the other, its the same with some AMD vs Intel fan boys, its tribal and its silly IMHO.

There must be a slight performance drop in Win 11 on AMD, it must have been measured somewhere and confirmed, because its getting fixed and rolled out next week, not next month as some sites are saying.

Its a total non issue Poneybirds, tell your brother to go ahead if that’s what he wants to do and the patch is coming next week, not Q1 2022, that is outright falsehood bogus misinformation spread by people who have an agenda … but, honestly, its all just a storm in a teacup

I fully agree, B12. Things will get more mature in time. I was just confused about the availability of an upgrade versus a clean installation. Seems I was misinformed, thanks for clarifying.

Anyway, i’m not in a rush. At home Windows 10 is mainly for starting games. I’ll try to get it as long as it’s free though.

The AMD Win 11 driver performance fix was released on the 21st right enough, installed it on Friday with no problems, Microsoft Win 11 update too, all rocking here