I just recently changed my Onion2 back to Hornet grips and haven’t experienced the loss of tension you describe.

Are you using the right size hex wrench to tighten? For me they were hard to adjust, but have not moved since.

Reread your post - I did notice a light tension setting did not work well, and adjusted it tighter.

I have a new Orion2-Hornet and now that you mention it, I have noticed the friction dropping off over the last few days. Maybe it’s just getting broke in? I noticed the sliders seem smoother than when I first got it also.

I just checked mine. It seems to be holding. It was Very low out of the box ond moving on its own. The F16 grip is very heavy.
I keep the adjustment key here 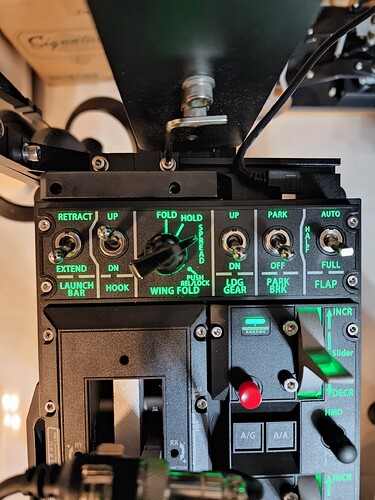 Thanks for the comments all. Yes it is definitely smoother now than it was when I first got it.

I’m probably just running with too light tension, I’ll add as much as I can stand and see if the problem returns. 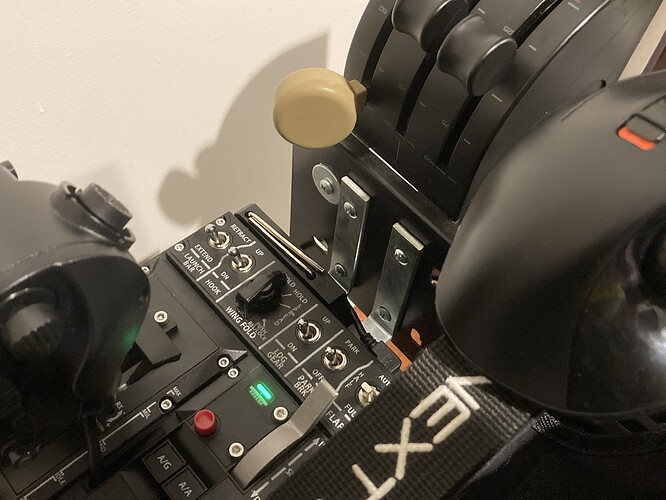 SHOW OFF!! lol
Ehem, I’ll go get my other key

So I have the F-16EX with Shakekit. Yesterday while flying the stick went unresponsive several times. I had to disconnect/reconnect it to get it working again. After disabling dynamic vibration motor in SimAppPro the problem hasn’t returned.

Anyone else experienced this?

No, I’ve never had the stick go unresponsive. Now I HAVE seen a delay appear in the buttons (not the axes). Such that where before you had to simply press now I had to hold. For hats that had separate short/long press functions it got confusing fast and resulted in me getting killed.
However, that usually disappears when the plane blows up and I get back in the pit–stick back to normal.

I have my throttle tension pretty light but it’s never flopped around on me. I have the Orion 1 throttle base which has the idle and AB detents (I heard Orion 2 removed them).
I also don’t use the riser for the F-16 throttle. It would add to the immersion, but it works just fine without it and it’s just another bunch of steps when I swap the Hornet throttles with it.

I also heard that the Orion 2 throttle base isn’t all metal like the 1? That in return for some switch/button/cable routing improvements you have to deal with some plastic construction now?

Yep, the base of the O2 is plastic but honestly it doesn’t bother me at all. It feels solid enough when bolted down to my desk mount.

How are those two sliders to the right of the throttles? Could you use them for RPM and Mixture?

I printed an alternate roller with handle for my Warthog throttle, but it would be great to have an extra axis down there.

Also, does anyone have details on their upcoming FFB kit? Is it force sensing (ala F-16 side stick) or a real DX compatible FFB stick?

So I have the F-16EX with Shakekit. Yesterday while flying the stick went unresponsive several times. I had to disconnect/reconnect it to get it working again. After disabling dynamic vibration motor in SimAppPro the problem hasn’t returned.

Anyone else experienced this?

In my mind the physical connection/cable is a little weak - I worry that it will become disconnected. Hasn’t happened to me, yet. Doesn’t jive in my mind with the shaker thing but who knows.

It actually goes crazy first as if I was slamming the x axis side to side and ends in being unresponsive until I unplug/replug. I recently updated the firmware so maybe it’s a bug. If I find the time I’ll open a ticket with Winwing on it.

SimAppPro needs some work for sure. I’d like to leave it turned off but then the AG/AA mode lights and the Landing gear lights on my takeoff panel won’t work.

I also worry about the connection inside the stick. Hopefully it’s OK as it shouldn’t be getting twisted around in there. All things considered, I’m very happy with Winwing gear coming from the Warthog. With all of the buttons, switches, ministicks, etc. between my Orion 2 Throttle,F-16EX and the takeoff panel I’m one happy camper. I’m pretty close to not needing they keyboard/mouse for much.

The sliders are OK - smooth but stiff. Way stiffer than the Warthog throttle “friction” lever. On mine the rearmost axis is smoother and less stiff than the forward axis, probably because I use it more (flaps in the Tomcat).

You could definitely use them for prop pitch and mixture. Indeed, having the two extra axis was a big selling point in the Orion’s favour when I was looking at what to replace my broken Warthog throttle with.

Here are the two curves. The constant here is where the AB kicks in. I had to tailor everything after 51 (right) to be more linear.
Im on the fence about the F-16EX stick with “Feedback”… Should I get it?

It’s like the rumble in a gamepad, it’s not true feedback. It does give you some idea of stalling if you choose to use it, but I could take it or leave it. You can disable it in SimAppPro easily enough, you can leave it running and not have the rumbles.
I had a real FFB Logi G940 years ago and that was awesome while it worked even though it had too few buttons/hats/axes and the rubberized plastic got sticky after many years.