This looks like an interesting traffic generator for X-Plane. If I understand it correctly (never a sure thing), it takes publicly available information from ADS-B and then uses that data to call up object models from a library (Bluebell) and then puts it all into motion around you. It should somewhat accurately provide near real time traffic. Looks like the kind of cool programming @fearlessfrog would appreciate…

This inevitably leads to some aircraft:

So with all of that in mind, I plan to give it a whirl tonight… 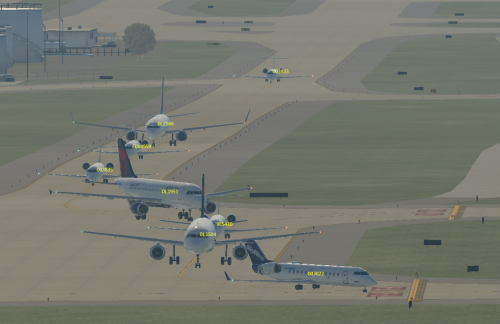 LiveTraffic fills your sky with live air traffic based on public tracking data requested from OpenSky Network, Open Glider Network, ADS-B Exchange and/or RealTraffic. It is compatible with X-Plane 11 (incl. Vulkan/Metal) on Windows, Mac and Linux. It...

Oooh. I do love things like that - thanks. Going to check it out.

A fair bit of ‘suddenly appearing aircraft’, but what a nice idea. Will give it a good tryout.

Matches up with OpenSky of course:

Can the ID tags be turned off?

Yes. I just left them on to see if the flights were accurate.

It’s suprisingly good in terms of performance, with TCAS working as well. It’s not great at ground control, but a nice idea to make things less sterile (for free rather than World Traffic).

The biggest pain was the install needed some resources that meant lots of unrar’ing stuff into directories.

Yeah. It would be kind of nifty if once the planes touched down they could be taken over by X-Plane’s own taxi system…but I don’t think that would be capable of getting planes to gates or anything.

I can see it now. Pilots flying in real life and with themselves virtually in real time.