Anyone that has the x56 do you know if you can turn the c stick on the main stick into a hat switch? Or is it just another joystick

I would have written back sooner but I Googled X56 joystick and then spent the next 15 minutes drooling on my keyboard…why had I never heard of this???

Regardless, I don’t know the answer to your question. That said, if the C Stick works as another joystick, then it will be very useful for the DCS Gazelle and and Viggen.

The a “second” joystick could be used to control the Gazelle’s Viviane weapon’s sighting system. Likewise a second joystick could serve as the Viggen’s radar stick and/or its RB-05A missile.

I may just need to get one of these…

It’s just another stick. But I use it as a 4-way for comms. It is very easy to do this with the software. You just set up bands around neutral. Takes just a minute to do. 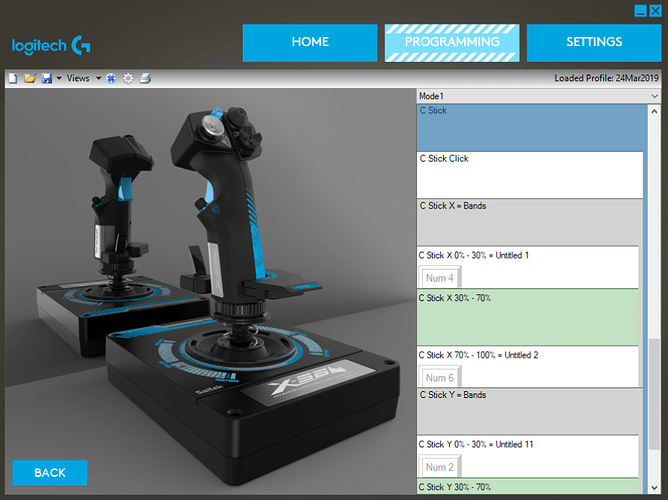 My friend has just bought an x56 and i had a hell of a time getting some of the functions to play with dcs.

Fantastic stick though and the throttle is a thing of beauty

I’ve been using this stick with DCS (and everything else) for 3 years now. It is the 1st, after a dozen sticks, the first to be totally problem-free. But I keep things simple. The profile above is the only profile I have. And the only thing in that profile is the “bands” for the C-Stick. Those are for SRS. I have one other button that is assigned Alt–> and that is for “VR super zoom” in IL2. Every other function is done in-game using the particular game’s controller setup.

This looks sweet and if it has @smokinhole’s endorsement, good enough for me.

Currently I have it’s little brother the X52. I purchased the X52 because I found all my other sticks to “sticky” (as it were) for helicopters. Technically the centering forces were too strong. The X series give you access to the centering springs, which you can then clamp off (I use binder clips) to give the stick more play.

I threw away my X-52 a few months ago after it had done duty for over a good decade before I replaced it with the Cougar. I sort of feel bad now… The X-56 is obviously it’s bigger brethren, and even though the outside was completely worn down and pretty much everything inside too, I feel like it should have gotten a more proper goodbye.

Then again, you gotta move on… Right?

Awesome thanks. I figured it could be done.

@Hangar200 the throttle has a mini joystick too.

The selling point for me was the twist stick, so I could get rid of bulky rudder pedals and leave my steering wheel pedals in place. The split throttle was a big selling point too and the fact that I can change the led colors.

I use the Saitek(Logi) pedals with my X56 because the twist was never natural for me. Especially in helos! I would use it in an old game like X Wing where rudder pedals felt like overkill but that’s about it.

I’d never thought of trying to use the ministick as a hat, interesting idea. I use it for moving the TDC around in DCS. There’s one on throttle and one on stick, and I forget how I have it set. I also use the ministick in Elite Dangerous for translation when docking or mining, left/right/up/down puffer jets with analog strength instead of just on/off like a hat does.

Ill be honest by use of rudder is very limited. 9 times out 10 i only use it to steer on the ground. So the twist isnt bad, My first HOTAS was a X45 followed by an X52. After that a got a CH setup and i had to get rudder pedals. I like the pedals but switching out to a racing wheel was a pain.

As for the mini stick as a hat, I just figured it would be of better use as a hat. No need for 2 mini sticks.

As for Elite, I use the mini stick on the throttle for landing as well. It makes it so much easier.