This topic is not 100% specific to MSFS2020 but my current workflow is aimed at that sim so for now I placed the topic here.

As I mentioned in the addons thread I have started to mod MSFS2020 myself, and since I cannot find the perfect assets for my project (I am working on a glider airfield near my hometown) I am getting back into 3d modeling a bit.

My previous experience with that was ten years ago in… 3DsMax9 or so, and some things (like texturing or modeling something that isn’t basically box shaped) I couldn’t do back then either.

Now is a new time (we reached the future a few years ago) and I thought I’d share and discuss my workflow and progress with y’all.
I am surprised how many things are SO much easier than they used to be, right now it looks like it could be actually possible for me to produce some not too dire looking stuff.

The tools and sources I use are usually open source or free. So yeah I am aware that I could do even better using expensive software or assets that I have to license, but that’s just something I am not doing right now, not for this kind of fun project.

So yeah, what am I doing right now?
The pipeline looks like this:

ArmorPaint is a program I discovered yesterday and it blew me away.
It is similar to the very expensive 3D painting programm “Substance Painter” and it makes texturing an order of magnitude easier and quicker. I always hated texturing and sucked at it. Now I feel like I have a chance.
It is OpenSource and free if you compile it yourself, or you can spend 20 bucks on it.
I compiled it myself of course (using git, nodeJS and Visual Studio 2019) but don’t worry, you don’t have to be a developer to do this.

I am sure that there are a few problems in my workflow still, but I want to figure those out and share my experience here as I progress.
If you are experienced in that field or not, feel free to ask, or post your own ideas, especially if they help 3D-noobs like me. Maybe we can learn to create assets together.
Links to resources, software, and tutorials are welcome of course.

I’ll post a few links and pics later, typing this on the phone right now.

Only five days have passed since I wrote “later” so this is the time I guess.

These are the programs that you will need. All of them are OpenSource except VisualStudio.

If you want to compile ArmorPaint yourself you will need

Here are some valuable sources that helped me learn how to model, texture, and get models into the sim.

So, here are a few WIP screenshots of my scenery and objects.

The scenery I am trying to build is a glider airfield called “Segelflugplatz Schwann-Conweiler” near Pforzheim, Germany. ICAO DE-0335

A few words about the airfield itself:
It is at 470m MSL, has quite a short grass runway (just a bit over 1000ft, 325m) that is slanted a few degrees in two directions, and the winch is approximately 900m away (and uphill in fact).
Any operation of motorized planes (including motor gliders) is forbidden at this field.

There are woods and windmills to the south of the airfield, so there is only a righthand pattern possible.
Some wind directions cause considerable downdrafts to the north of the airfield.
On final approach gliders sometimes fly between some trees that are standing on the meadows east of the field.

I made this simple wooden fence. The geometry is super simple (which is good because I need good performance as I have to place dozens of them), but the normal maps and stuff make it look pretty nice ingame. 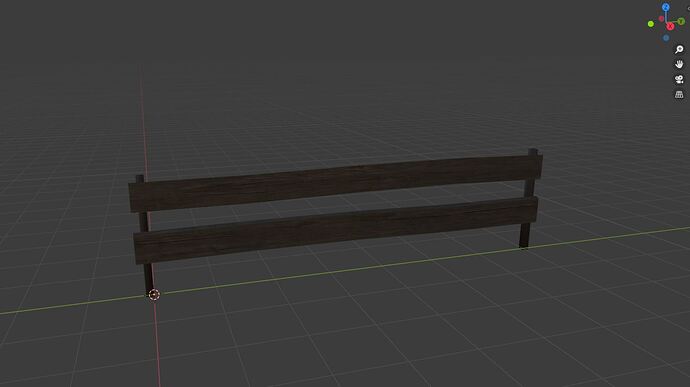 Here is a traffic light object, fully textured and already ingame. I modeled and textured it according to the real one used at that particular glider airfield. There are two of them which are used during glider operations at the field. That’s because there is a path right at the end of the runway.: 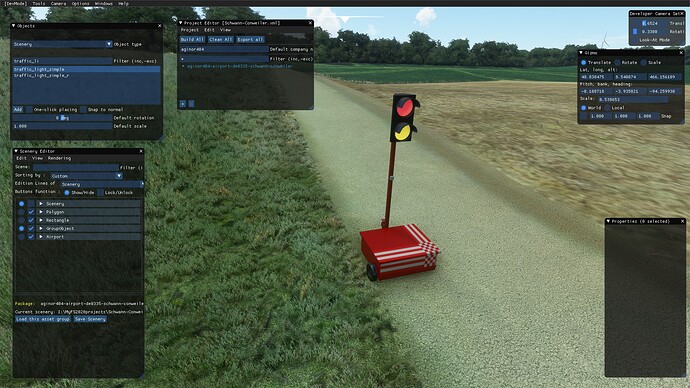 This is the “Schwanner Warte”, a watch tower next to the airfield. 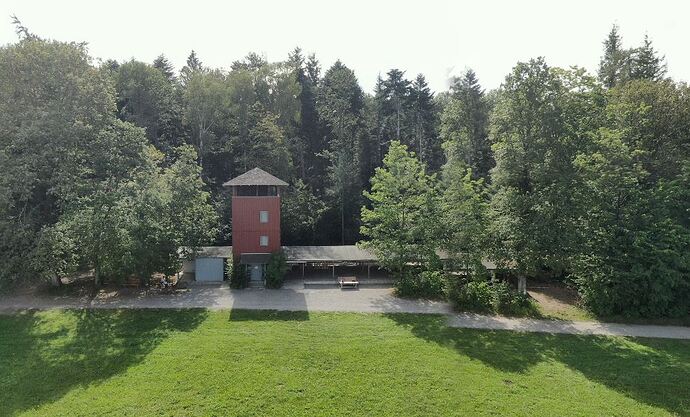 And here is my (WIP, especially the windows) version of it: 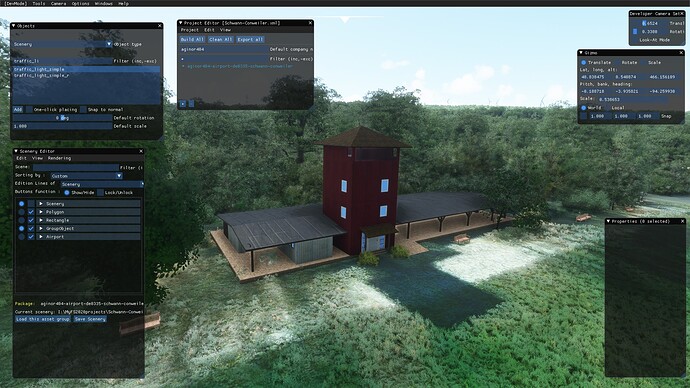 I also terraformed the terrain to be closer to the real world (which is not easy, the terrain there is anything but flat), and added a lot of people and objects including a winch, cars, and gliders as well as their trailers. 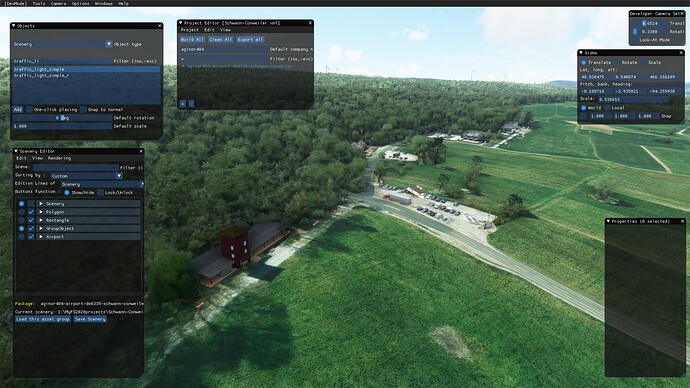 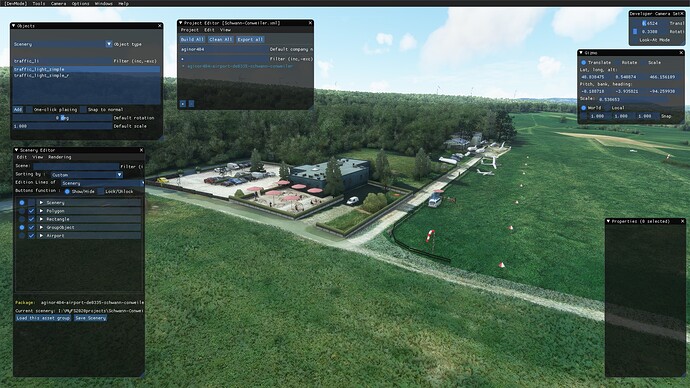 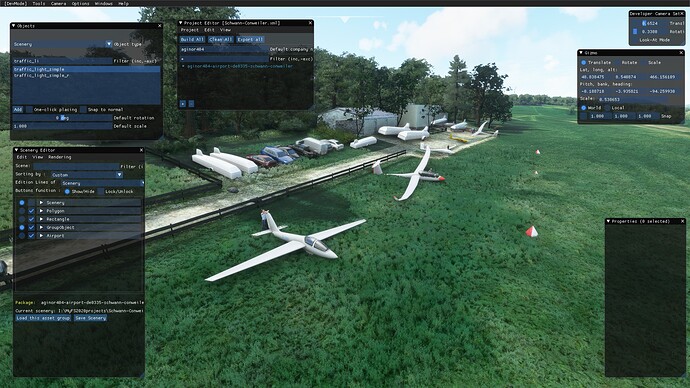 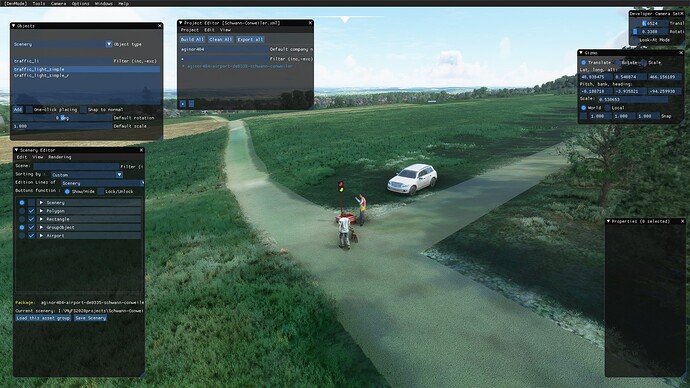 The most important things on my TODO list are a few more buildings to build, because some of the autogen objects sadly don’t match real life very well at all, especially since the last update.

My next object is finished, a wooden “Caution, flight operations” sign.
The airfield has a dozen of them in various positions to warn people (nobody really wants to get hit by a plane or a steel cable). 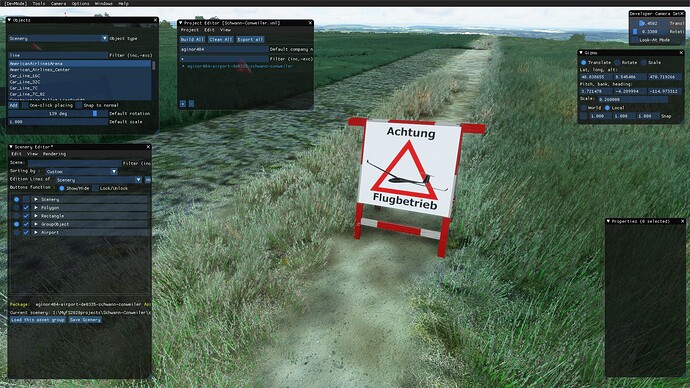 The same sign (without the additional color layer that makes it red and white) can be used for other purposes. 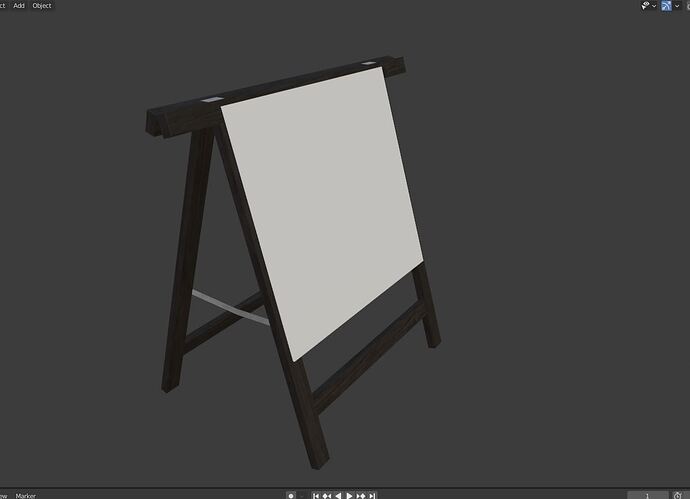 Great stuff! I will have to give 3D modeling another try. It is a skill that I would really like to get my head around. I think my main problem is that I never want to take baby steps, and instead, jump in with something complex like an airplane, and then I get frustrated and that’s the end of that…

Well…we know who to call to build the Mudspike Pub…!

Yeah, airplanes tend to have round shapes and that’s something I always found hard to do.
I might get there eventually but that is indeed advanced stuff.

But buildings for scenery are a great place to start. You can get away with a lot things.

Give it a try! There are lots of resources around nowadays and it is easier than it was a decade ago.

Definitely great stuff @Aginor
All I wanted to do few months back was to update some of the XP11 aircraft cockpits. The 3D modeling part I grasped somehow but I didnt get over the texturing part yet.

Hopefully I will learn something from you

Nice video about the MSFS2020 glass material.
I’ll add it to the first post as well.

“Blender Guru” on Youtube is also pleasant to watch. Lots of beginner stuff.

Blender Guru creates tutorials and videos for the free 3D software: Blender. The host is Andrew Price, who lives in Brisbane Australia.

I am diving deeper into this now it seems. Have been watching several hours of videos already, and remembered some stuff I used to know. I am also watching this guy at x1.5 speed, and he is still easy to understand. There’s another nice guy who explains well, but he is Indian (or maybe Pakistani) which can be hard to understand.

Here is a WIP screenshot of the hotel I am working on. It is right next to the airfield so it has to be a bit more detailed.
This is the almost finished side, the other one is pretty blank except for some basic geometry.

Fun fact: the owners of the hotel had the same thought!
I haven’t added that yet but there are big letters on that (newly added) elevator shaft building saying “ADLERHOF”, the name of the hotel.

Here’s the north side of the building.
I am at 98% modeling-wise, after that it is the first (untextured) export to find visible mesh errors, and then texturing. 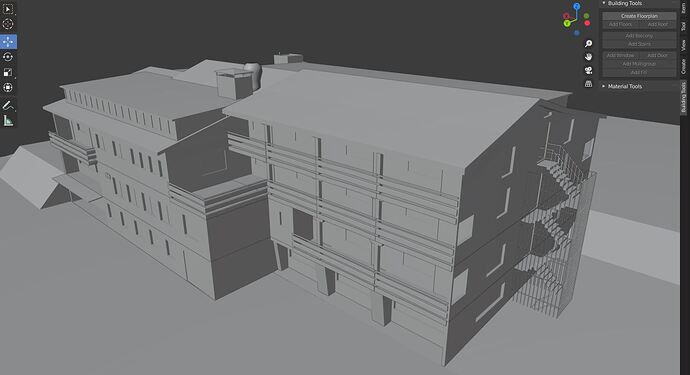 So… I haven’t actually played the game in two weeks now, but I will begin texturing the building today!

I did a text export to MSFS2020 without textures and it looks pretty good.

Lol.
@Troll’s thread about his hand controller holder made me realize that I can probably use the blender skills which I am acquiring right now for creating real stuff as well. My brother bought a 3D printer recently (hasn’t even tested it yet)…

whatever format that printer uses

STL or OBJ seems to be pretty much standard formats for the slicer software.

I’m impressed, Aginor. I’m a couch scenery designer. I think about making a lot of scenery, on the couch, but not actually doing it.

I’m interested to see how your buildings turn out with textures. I think that’s probably the main thing holding me back from custom buildings.

Hey a 3D object maker and a talented artist like @komemiute - you guys could open your own payware MSFS scenery development team! Let us know if you need company names…I’m sure we can get creative…