Be Cool, Man - Taming the GPU Inferno with a drink

So, here I am, 2021, with a grandiose plans to upgrade – actually build, on my own – a new flight sim PC (cuzz that’s all it would really do anymore). Need the latest GPU. Every 3-4 years this plan has worked. Ya’ll know the rest…

In a nutshell: Water cooling your GPU worked for me, showing a significant reduction in temps.

My nVidia 1080 is doing okay. But it’s been running hot, to me, for some time now and the associated noise from the fan is mildly disconcerting. In VR of course I can’t hear it but, well, it’s a symptom I guess. So, I start digging.

Come across the idea of water cooling your GPU. Not being a hardware techie never stopped me from trying.

In a surprising moment of forethought I actually documented the temperature numbers before I made the modification.

I’ll save you all the other scenarios and skip to the finale:

There are several YT videos on this so I’ll just go over the bare basics.

An example, NZXT ‘Kraken’ G12 (I chuckle at the name the marketing types give to these kinda of things…but I digress): 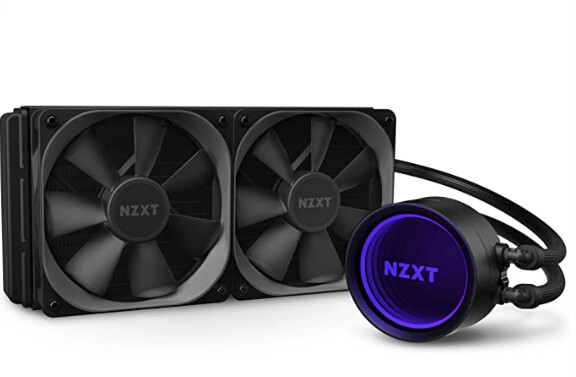 Any questions and I’ll be happy to share. It’s kind of amazing how much cooler, and quieter, this is now. In fact after a 45 minute flight in DCS the temps never got above 39c! Used to be in the 70’s, with the fan running full tilt.

I just bought a GPU with a hybrid fan/liquid cooler, but this looks like a nice solution.

GPU with a hybrid fan/liquid cooler

Yeah, after this I’m thinking that’s the way to go, based on the engineering of the card…

…every time I think of this [water vs air cooling] I recall a crusty old timer I used to ride with (motorcycles). The day I pulled up in my shiny new 99’ Yamaha R-1 he looks at the radiator and goes, “huh, they used to engineer them so you didn’t need radiators…”. I was kinda hurt (not really, but that response stuck with me).

Awesome! Watercooling is definitely the ultimate GPU cooling solution, and this AIO adapter setup is the only reasonably priced way to do it. Very cool😉, thanks for sharing!

As you say, this is a hybrid solution, where the GPU core is cooled by the liquid cooling loop, but the rest of the components are cooled by the fan on the adapter. Unlike those full PCB waterblocks that require a 400€+ custom loop.

How does the air cooling part of the cooling solution perform? How is the noise level and what are the temperatures of the VRMs? I guess on most GPUs and monitoring software you can’t see that, but it would be interesting to know.

How does the air cooling part of the cooling solution perform? How is the noise level and what are the temperatures of the VRMs?

Seems fine. I’m guessing it can’t be worse [than the OEM parts - a ‘blower’ style fan]. HWMonitor doesn’t give me the VRM temps. As for noise, something is slightly louder than before, so I’m guessing it’s that fan, but under load it remains the same. The OEM fan was really loud under load. I guess do the the very significant reduction in temps. I’ve yet to see higher than 39c (in DCS + VR), even after an hour+.

Now, the card was 3+ years old so perhaps the thermal paste was getting a bit…errr…pasty. Maybe dried out? It’s been too loud for at least a year - if the fan didn’t boost the temps would be over 80c pretty quick.

I read that as Fahrenheit for a split second and thought you had finally cracked the beer cooling / gaming rig dilemma that has plagued us for years.

Now, the card was 3+ years old so perhaps the thermal paste was getting a bit…errr…pasty.

Wanted to post it right away, but you asked for it @BeachAV8R

Alt+0176 for °
Or on an iPhone keyboard, press and hold down 0 to get the degree symbol!

Now, the card was 3+ years old so perhaps the thermal paste was getting a bit…errr…pasty. Maybe dried out?

Ah yes, the same problem I had in my GPU cooling mod adventure. Was it the paste or the other stuff that did the trick? We’ll never know.

Considering that your card had one of those old blower style coolers, anything is better than that really!

For those of us who want to make their older GPU quiet and don’t have a bunch of fans or AIOs lying around, replacing thermal paste will probably get you 7 °C or more on a 3-4 year old GPU.