I recently found out that my childhood hero, Buck Danny, had been resurrected.
New stories, in color, from this century…
I just had to have them!

Good to see they are translated into English as well!
Actually the Buck Danny series never really stopped (and is still going until this day).
Your new albums are actually my childhood memories. Personal opinion of course, but for me the Francis Bergèse-era is the best.
Francis Bergèse also drew some books for a comic book series based on W.E Johns’ Biggles adventures.
A few year ago he retired (because of hand injuries IIRC), but artists like Eric Loutte and Jean-Michel Arroyo keep the aviation comics going!
Unfortunately I doubt that a lot of it is translated for the English speaking market. We in the Netherlands already miss out on a lot of the "Bande dessinée’ goodness from France, but Buck Danny we usually get in Dutch.

The ones I got a hold of are the only ones I found that was translated to English. Perhaps thay haven’t translated all books?

The drawings are really well done. The detail is phenomenal, yet they still look like a cartoon.

Dang…if I could get a full lot of these in English, I know my son would flip out over them…

This is a great page with the history of the series. Unfortunately, it only looks like around 7-9 were translated to English. Of course, might be a good time for Kai to pick up some foreign language skills…

Hmm I might do fan translations of some, just to build a portfolio

if I could get a full lot of these in English

I got mine on Amazon.

This is actually Volume 57. In March 2021 Buck Danny volume 58 “The Pact” (part 3 of a trilogy) will be released in France, Belgium and The Netherlands.

On the Facebook page of artist Gil Formosa we may enjoy the previews of this volume: Facebook

Since 2013 aviation series Buck Danny has also a spin-off series: Buck Danny Classic. Meanwhile 7 albums. With stories between WW-II and the early sixties. The Buck Danny stories from these period where on the Continent by far the most populair. With awesome scenario’s by the late Jean-Michel Charlier. Today the Buck Danny Classic spin-off has 2 scenarists: Fred. Zumbiehl, a former French pilot, and Fred. Marniquet.
Artist Jean-Michel Arroyo was responsible for volumes 1 - 6, and artist André le Bras drew “Sea Dart”. His 2nd Buck Danny album by-the-way. Le Bras also drew Buck Danny ~ The Blackbirds, volume 2/2. This 2-part story was started by scenarist Charlier, but he died during writing page 21 of The Blackbirds volume 1/2. The Blackbirds is sold as a oneshot.
Actually, The Blackbirds is a story between volumes 44 and 45. To celebrate “70 years Buck Danny” in 2017 this unfinished story by Charlier was finished by the scenarist Fred. Zumbiehl and Fred. Marniquet. Artist Francis Bergèse drew the missing pages of volume 1/2 and painted the (great) album cover, and artist Le Bras drew volume 2/2. Artist Gil Formosa (Buck Danny #54 - #58) painted the album cover of volume 2/2. 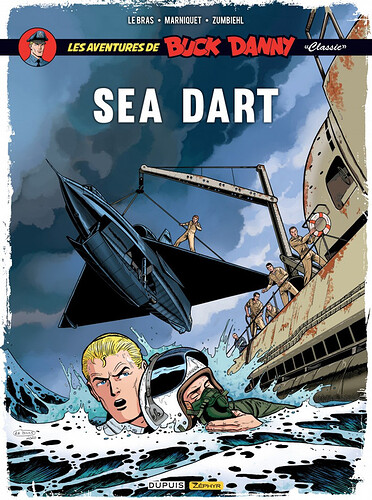 As usual with this avion series: on the back cover all the Buck Danny albums are listed in a chronological order (meanwhile 66 volumes, and in March 2021 even 67 volumes): 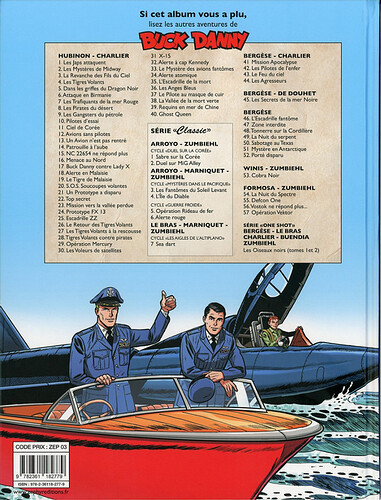 Regarding the ranks of our 3 protagonists:

Welcome to the mudspike

@schurem. Thanks!
You may write in the English language. I am from the Netherlands and following the Buck Danny series since 1962. My fav character from this aviation series is major Jerry Tumbler. Jerry had a far more important and interesting role during the WW-II stories. As well as nowadays:
below: a preview with Jerry Tumbler from Buck Danny #58 “The pact” (between Buck Danny and Jane “Lady-X” Hamilton by-the-way): 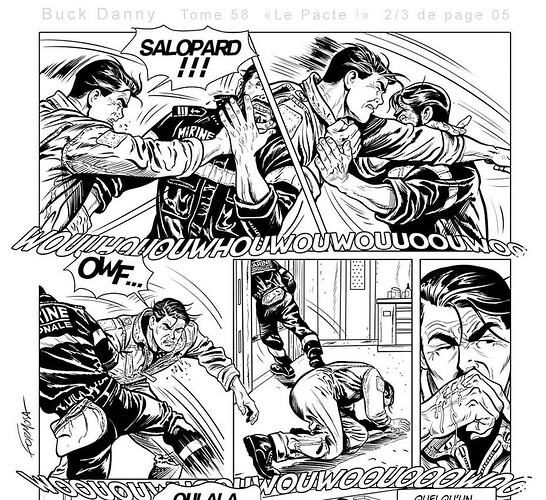 And like Andrea I am a huge fan of aviation series Angel Wings by the great French artist Romain Hugault and scenarist Yann too; visit: Romain Hugault : Site Officiel

At the moment Andrea Salimbeti is preparing to update his website with the recently released Buck Danny Classic volume 7 “Sea Dart” album. A summary of the scenario has already been added.

Artist Francis Bergèse discontinued “Buck Danny”, after finishing Buck Danny volume 52 (after a conflict with his Belgian publisher Dupuis about wanting a scenarist again), artist Fred. Winis continued series Buck Danny with volume 53; but he then was fired, as he copied too many scenes from former Buck Danny albums. Artist Gil Formosa, who was actually the first choice to be Bergèse’s successor. Formosa started with Buck Danny volume 54 (Cinebook’s volume 9).

Unfortunately publisher Cinibook has (so far) never released Buck Danny volumes 41 - 44. These albums have outstanding scenario’s by Jean-Michel Charlier and are drawn by artist Francis Bergèse also.
Today Cinebook is releasing all the Lucky Luke albums in bundles. Perhaps they will in the near future also issue the former Buck Danny albums as bundles. 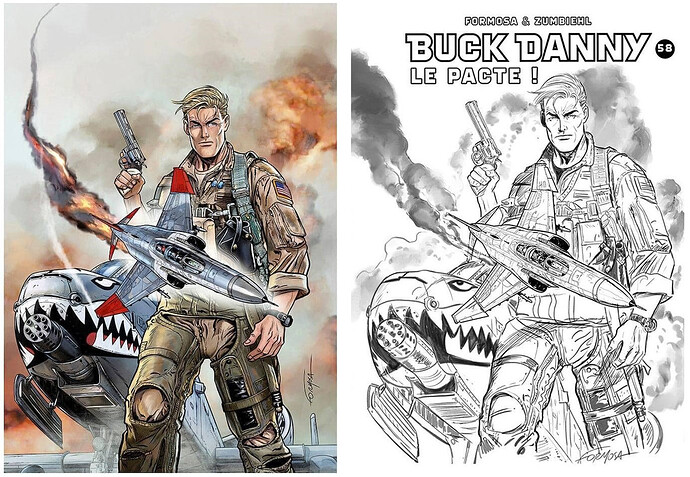 Also from this album:
location: the Nevada desert; scenes: Buck Danny with a Colt Python 357 Magnum against the bazooka of his enemy, Lady-X: 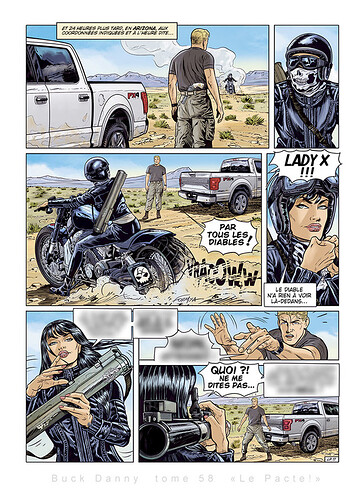 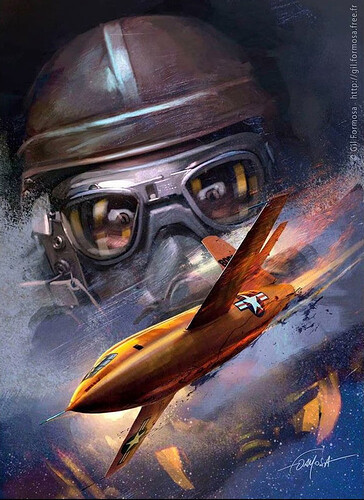 I might be mistaken but it looks more like an M72 LAW to me! Fantastically drawn, though. I’m in love with that A-10 drawing. 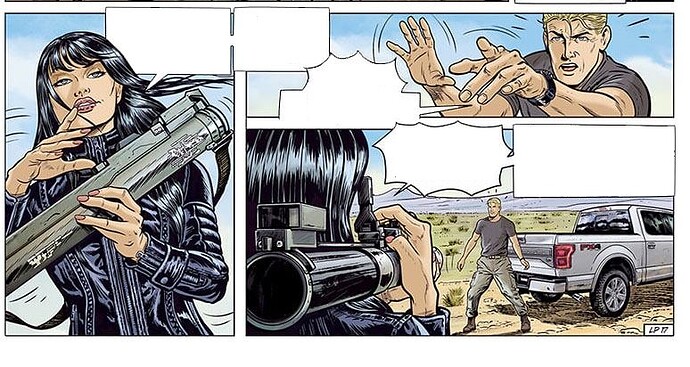 Jane “Lady -X” Hamilton prefers these kind of weapons (part from the cover of the previous album): 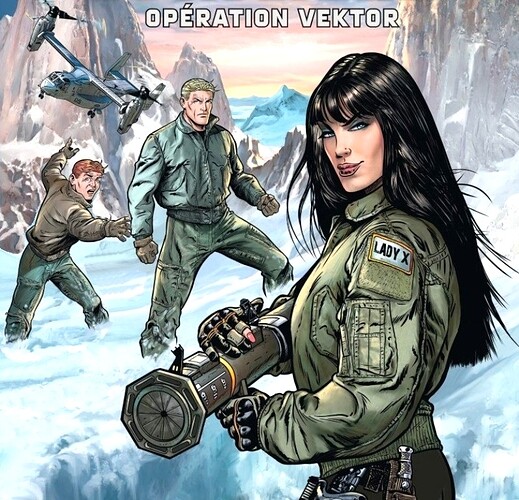 Before publishing, more often the artists ask their fans which cover-art they like. Their choice was between: 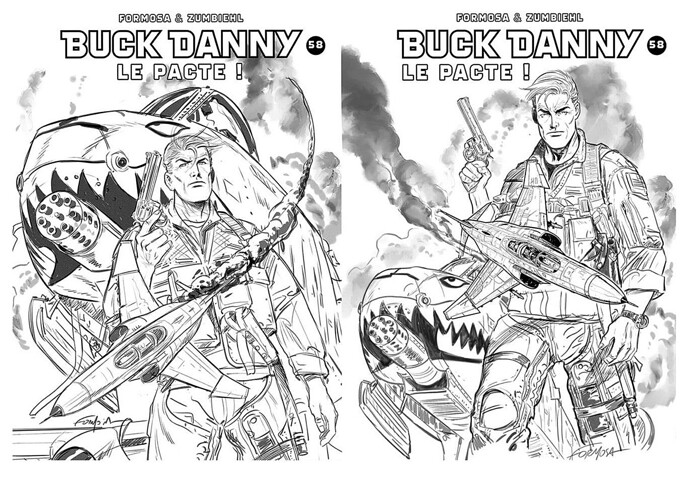 Concept of the winner: 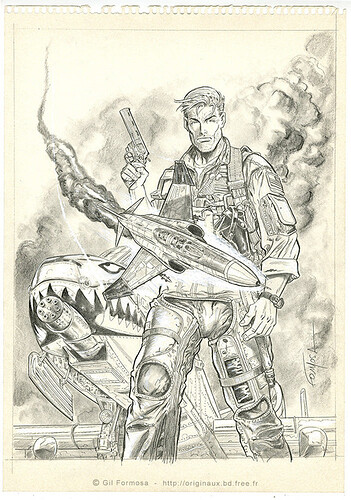 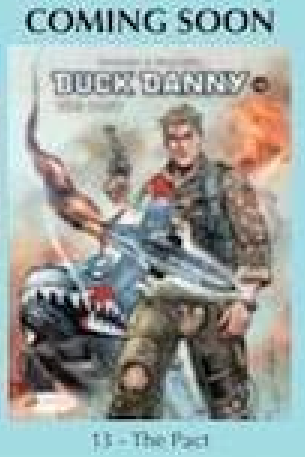 Some previews from Buck Danny ~ The Pact (March 19, 2021). Not in a chronological order; warbirds: A-10 Thunderbolt, F-4 Phantom (colouring by Isabelle Formosa): 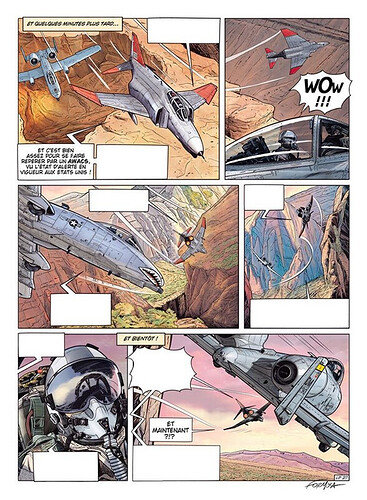 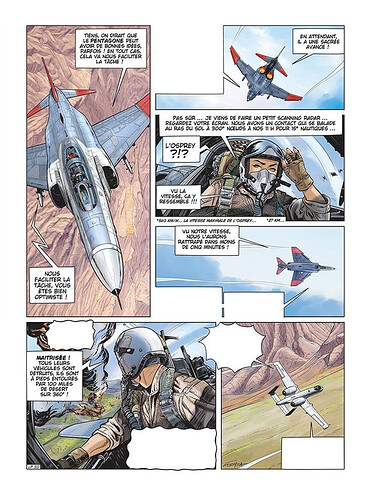 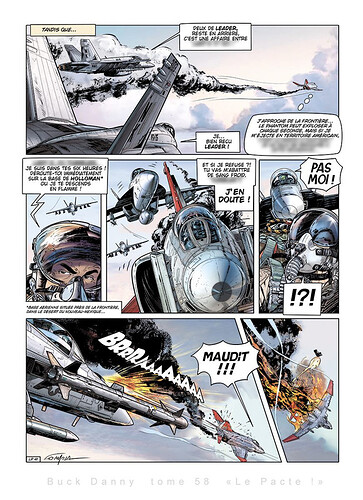 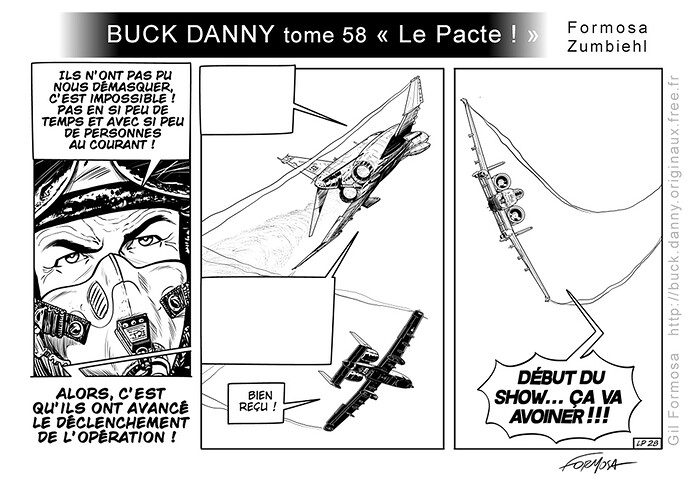 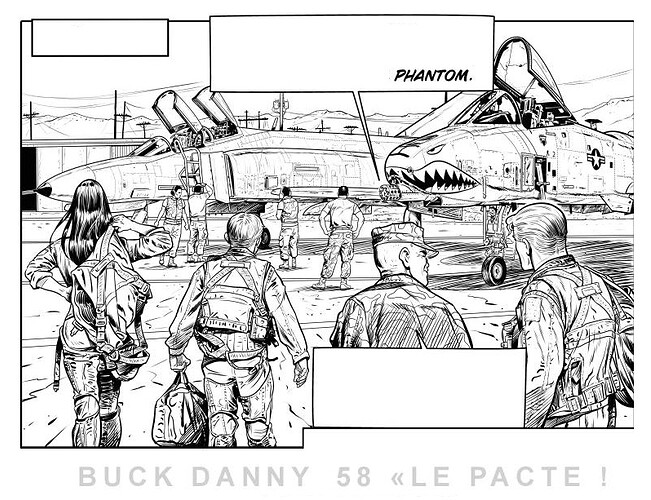 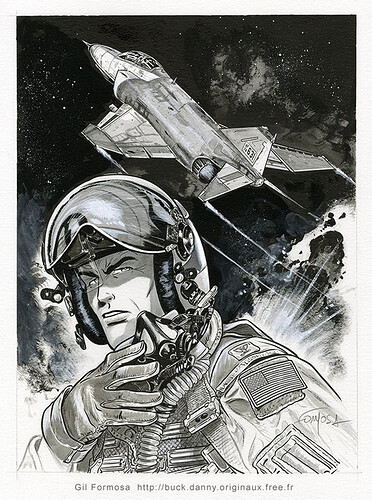 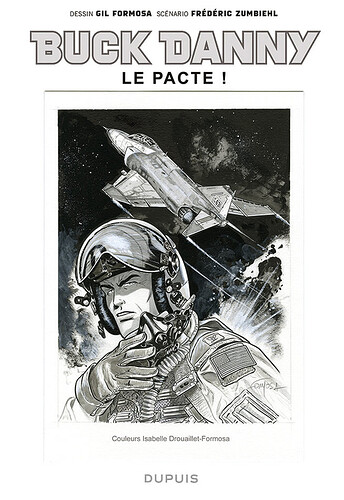 Despite nowadays teams are working on the Buck Danny (spin-off) albums, there are still unnecessary errors. In the past the creative teams had no Internet, but too often it looks that making a new album is a rush job.
For example: in Buck Danny Classic #3 we see the B-29 'Enola Gay" with turrets, but on every picture and Youtube vid this B-29 had no turrets (they were removed at the end of WW-II).

In the recent Buck Danny spin-off “Sea Dart”, a story in Autumn 1953. we may notice on page 26 a Cadillac Eldorado Biarritz with it’s huge tail fins from 1959 (!?).
On page 1 a Nazi with a Hitler salute, saying “Zieg Heil!” But it’s “Sieg Heil!” (der Sieg = the victory). Meanwhile a well-known salute from WW-II, and like “Luftwaffe” in WW-II related subject, rarely translated.
In 1953 protagonist Sonny Tuckson had rank Lieutenant. However, on some pages it’s Captain Sonny Tuckson.
The Sea Dart has stability problems. Col. Buck Danny, being a naval engineer too, advises to use one ski. However, in reality the stability of the Sea Dart was improved by 2 ski’s. Luck for Buck Danny: the Sea Dart is only an excuse to spy in Argentina, and is he no longer involved in testing this unsuccessful plane. Probabably the Sea Dart will not take part in part 2 of this dyptich: “Eagle’s nest”.
And the test location of the Sea Dart wasn’t Patuxent River (Maryland), but San Diego Bay (California).
These comic albums/graphic novels are fiction, but…
Nevertheless, many errors could have been easily avoided with a better research. 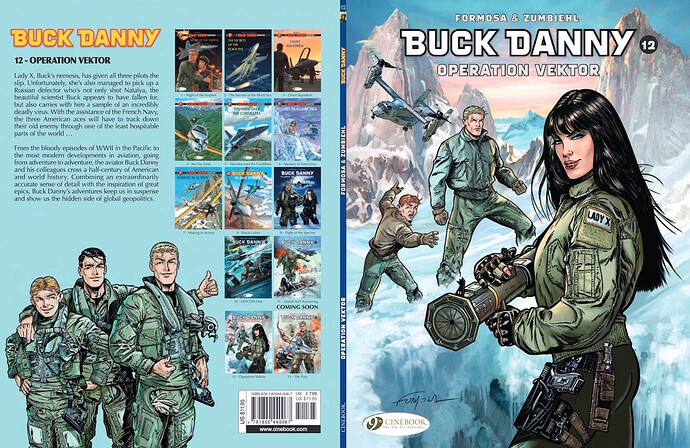 I would love to buy these on comixology.