Interesting video on landing on a carrier with a pitching/rolling deck.

Inb4 @Navynuke99 throws series under bus for any number of crimes, failure to involve the nuc department chief among them.

Intense. I’m curious as to the sea state during those landings; at what point is the sea state bad enough that carrier operations are called to a halt? Also, that pilot that had three bolters and had to go get some gas; the weather is so bad for landings, does he still get a bad grade for landing in such difficult weather if it is not picture perfect?

That’s a better word than the one I was going to type earlier!

But damn, mad respect for Navy Pilots. Like, really.

Inb4 @Navynuke99 throws series under bus for any number of crimes, failure to involve the nuc department chief among them.

I actually wrote a longer critique about my issues with the series in another forum, but that’s for a separate thread.

Edit: actually, here it is, because I think it’s fair. I’d love to hear what @boomerang10 or @Hangar200 thought, if they watched it.

Top Gun used to drive my dad up the wall. He hated that movie because it got so much of what it felt like to be in naval aviation completely wrong.

I would imagine having lived the experience the filmmaker is trying to depict on the screen would make someone a little nuts. I would think that it’s a rare thing for a filmmaker to get the details right.

Another good one posted on Hoggit (source):

Well…@Navynuke99 and I bear some of the responsibility for them not shooting video everywhere since neither of us will let a camera into our spaces.

That said, there are a lot of things that happen on a carrier that nobody really thinks of.

For example, we eat…and somebody has to make those meals. At home I go to an awards banquet for maybe 100 people and the best the caterer can do is rubber chicken. Try making 4 meals a day (Breakfast, Lunch, Dinner and Midrats) for 6,000 is people…a bunch of are 19-21 year olds who have been doing hard physical work all day. And if the for psucks…I don’t even want to think about it.

Another example, after we eat (and digest), we issue “waste products” from all that food…and that has to go somewhere…again, lets take a look at how you handle that much “stuff” a day. There are whole, big auxiliary machine spaces that process the stuff before it gets pumped over the side.

We also have to breath (and our computers like things nice and cold) - there are spaces on a ship just dedicated to big air movers and chill-water AC (called Fan Rooms)…just keeping the air circulating around the ship (not to mention cool in some spaces the its 100+ºF outside…somebody’s got to maintain those things.

There things need to happen 24/7. Non-stop. Every day. No breaks from the time you pull out of home port until when you get back.

In one sense, an aircraft carrier is a big steel thing that keeps 6,000 people alive…and also does a little flight ops for a few hours a day.

It always amazes me when you start thinking of the depth of the systems required to make to obvious and public bits function.

Great video Fridge. Listening to the Fighter Pilot podcast, I learned that the shooters like to shoot on the rise of the swell, which makes sense.

It always amazes me when you start thinking of the depth of the systems required to make to obvious and public bits function.

Being part of helping build one of those was more than a little humbling, and very exciting. It was amazing being able to walk through that giant metal hulk and seeing how things took shape and came together.

It’s all in the timing - from the time he touches the deck and points forward, to the sailor who actually hits the button, to the tome it takes for the cat to fire to the time the plane gets to the end of the cat-track…truly amazing.

And remember not all the cat tracks are the same length - cat 4 is shorter - makes for a more exciting ride.

Somewhere on the internet there should be a video when one of the shooters got it wrong - can’t remember if it was a Hummer or a Hover (E-2C or S-3B)shot off one of the bow cats…it disappears below the flight deck, there is some spray from the prop or jet wash…and then it reappears and flys off.

I have had 3 cat shots and one trap, all in the back of a C-2 COD. By far, the cat shots are more exciting.

A “Pitching Deck Wave Off” doesn’t count against their scores.

I’ve seen that video - pretty sure it was a Hummer, and holy crap, I could feel my heart in my throat seeing that thing looking like it was dropping right into a wave. Then the relief when it reappeared and started climbing.

Listening to the Fighter Pilot podcast, I learned that the shooters like to shoot on the rise of the swell, which makes sense.

The U.S. Navy benefits from a lot of hard won experience. 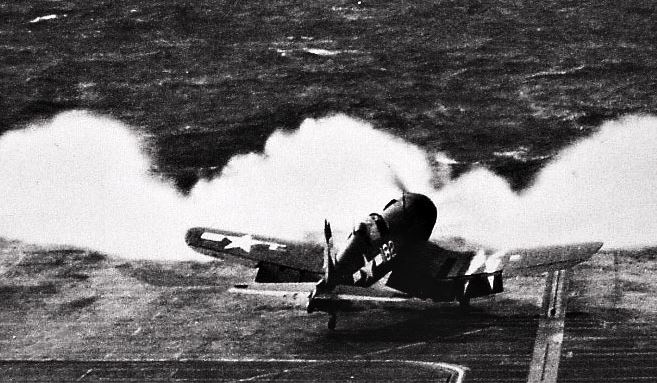 Think you are correct - a Hummer.

We had a bad night when I was on CV-67 - 1987, January in the Adriatic -cold and heavy seas. One Tomcat lands too far right and clips the wings/drop tanks of the A-6s parked on the foul line.

Fire…Big Fire…right above CVIC. And evidently F-14s don’t fly to well with the better part of one wing knocked off…so they decided to jump out…and survived.

The.next guy in line (who saw the fireball…naw, that’s not going to shake you up) was one of my roommates also in a Tomcat. So everybody airborne drills holes in the sky while the flightdeck bubbas put out the fire and clean up all the FOD in the landing area. Finally they are ready

To make a long story short, my roommate gets a pitching deck wave off and a “hook-skip bolterl” (he came down in the wires but between the deck moving up and the jet moving down, the tailhook bounced when it hit)…tries to hit two airborne tankers; both are “sour” (refueling is broken)…

He’s got enough gas for one more look at the deck, so they rig the barricade. Wouldn’t you know it, he had an OK 3-wire pass…and then into the barricade, which tore up the jet a bit.

His guages were reading 0. They had to open the tanks and stick a yardstick in to see how much fuel he had let…it wasn’t much.

So in the end, one jet as an artificial reef and a few that got beat up / fire damage… some injuries but nobody died…so while not exactly in the Win Column, overall not a very bad night.

People ask me if I miss the Navy…I do…but I don’t miss those nights.

I’ve seen that video - pretty sure it was a Hummer, and holy crap, I could feel my heart in my throat seeing that thing looking like it was dropping right into a wave. Then the relief when it reappeared and started climbing.

It was also a wire break.