Completely Off the Wall Question

As the title says , this one is related to nothing except, since we’ve got a bunch of 50lb head guys in here, I’m certain to get some super intelligent answers.

We just moved into a new house, which we love…except for the looming threat of death constantly hanging over our heads.

We are the first house in a development where a fairly curvy, woodsy road straightens out and enters a downhill slope. The speed limit is 35mph, but both the incline and the quality of local drivers means that they routinely come out of this chute closer to 40-50. Until you are perhaps 30ft from where the hilled, forested area opens to the wider residential area, you cannot see our driveway at all, nor can anyone in our driveway see who is coming down the road until they are maybe 50-75ft away. Here’s a (poor) artist’s rendition:

The dashed blue line represents a rough Line of Sight to the road. The distance between the driveway and the hill we cannot see beyond is approximately 30ft. The width of the asphalt siding is approximately 10ft.

The only virtue to this setup is that the road does widen to give almost a complete car width of space before the road proper. But it is not quite wide enough to pull out to see around that hill. Occasionally people do park there as well, making even right hand only exits an issue.

Thus far, I have tried putting a convex mirror on the mailbox as far out into the street as I could get it. But that has obvious optical limitations and probably does more to provide a false sense of security than it helps. Putting that same mirror across the street is probably a no go due to the neighbors.

What I feel I need is a periscope. Maybe just two mirrors at 45 degrees to “translate” the picture towards the driveway. But I’m pretty sure that my great idea is going to be much harder than it sounds…especially with the distances involved.

I’ve also considered some electronic method of solving this issue. But powering the device, linking it wirelessly, and having it survive being mounted on the roadway sounds like an expensive proposition. Also, I don’t technically own that hill and the city owns the road, so I have to be careful of what I do where.

If anybody has any genius ideas that I haven’t thought of yet, I’d love to hear them. I’ve almost gotten creamed a baker’s dozen of times already, Pet Cemetery-style, and I’d really like to solve this issue before something like this happens. 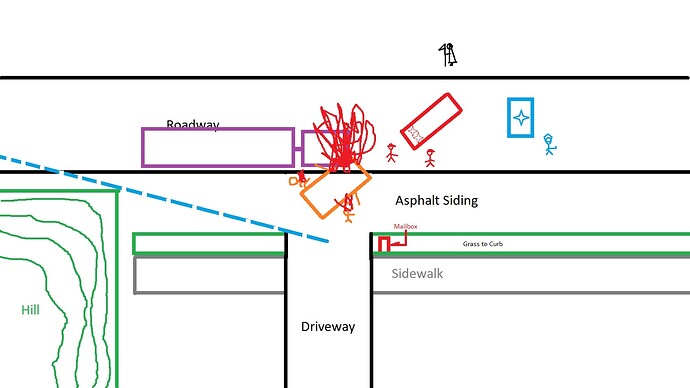 I have seen the convex mirrors (like you mentioned) heavily used in Korea and Japan, and they are decently large… like 18 to 20 inches, with a little rain visor on top.

Perhaps inquire with the neighbors about placing such a mirror on a low pole across from your driveway (or off to the left slightly, to widen it’s view)?

I’m all for a recon drone attached to your car.

Get the city to put a speed bump across where you drew the hill. Either that or get them to draw a no-parking cross on the siding so you can pull out more safely. They are responsible for the road safety, not you.

Oh, and something else… I once had a similar situation, but instead of a curve, it was a 2 lane state highway.

I called somebody with the state highway department, and talked about the issue. They agreed to send out a crew, and they installed a sensor on the road way, and counted traffic and speed for a few weeks. If they felt the traffic levels and speeds were too high for the number of residential driveways opening there, they said they would lower the speed limit through that area.

Unfortunately, they did not find cause to lower the limit in my case, but they still did check. No idea who it was I called, this was near 20 years ago now. But it couldn’t have been anybody special as I had no contacts, just a phone book.

I’m with @adlabs6 and @schurem here.
A mirror on the other side and talk to the city about it.

How long is the driveway and what‘s the elevation ASL?

I fourth the motion of the mirror, widely used both in Italy and Germany.

Thanks for the replies!

I have a call in to the city about more robust solutions. I was just hoping for something simple. And quick.

Here are shots of the view to the left and the right. You can see the mirror helps a bit. If I could stick it out into the road a bit, it would help a lot more.

There is a telephone pole across the street. It might work. But it’s going to need some serious tree trimming, so that’s going to require some permission.

Claymore mine wired to a garage door clicker

Hit the button 3 or 4 seconds before you pull out the driveway and you wouldn’t even need to check for oncoming cars.

See? This is why I came here.

Wireless webcam or baby monitor stuffed into the tree/bush (maybe high up) at approximately the location of the grim reaper here: 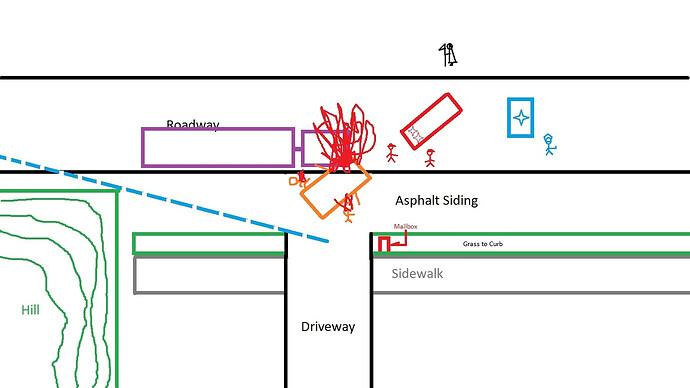 Check your phone while pulling out. Downsides, you need to hide the camera and that probably won’t work, but at least you get a picture of who stole it. Also, the ones with batteries are not so good.

Personal traffic light there that goes red when you reach the driveway/street junction.

Removal of that first tree in your photo would improve the view of the road significantly. Would that be an option?

I would take a power tool (edge trimmer, heck even a chainsaw) to all the green to the right of the tree in this picture. It’s just weeds and shrub, city will see it as a community service.

I could tell you how to ‘murder’ a tree, prompting the city to remove it, but then I’d have to kill you…

Just trimming the shrubs should net a valuable few seconds of sightline to the oncoming traffic.

I’d Napalm that whole hill until it smelled like victory.

But at the other end of those woods is a neighbor, who owns that hill.

And thought enough about it to walk through the woods in order to put no trespassing signs facing all his bordering neighbors’ yards.

So, I’m guessing that isn’t going to be much of an option either.

There should be an easement distance along the roadside the local jurisdiction owns. Definitely call the town/ county and talk to the engineer’s office about that as well.

Also - while it will be boring, digging into the Council’s own rules and regulations (usually found online) can be a big help, as if you can talk about how “the current arrangement is non-compliant and dangerous as per Council’s policy (refer policy here)”, they have a harder time ignoring you and also a stick to bash the neighbour with.

If you can get them to install speed reduction devices (ie speed bumps) that would be the simplest for all involved. The bolt in kind take about 15 mins to install.