A joystick is normally used to operate two axes simultaneously, controlling pitch and roll of an aircraft. The most common design for flight simulator joysticks is normally a gimbal design, where one axis is gimballed around the other, allowing a single joint for both axes.
And then you have the control wheel type controllers, often referred to as a ‘yoke’ or ‘control column’.
Although there’s no absolute distinction for their use, the control wheel/yoke/control column are not usually found in fighters.

However, many fighter aircraft have a split axis design, sort of a hybrid between a joystick and a control column. I struggle with coming up with a proper name for it…? Maybe someone can help me out here…? [slowly turning my head, looking at @TheAlmightySnark]. It’s like a one handed control wheel…

I looked through my DCS hangar and came up with quite a few aircraft that has a stick, controlling roll, on top of a base that controls pitch.
There are obvious advantages to this. 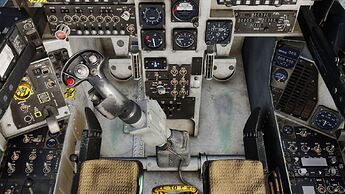 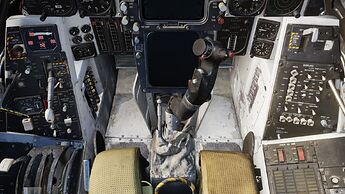 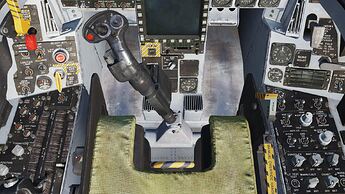 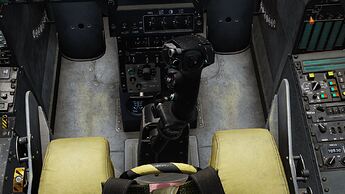 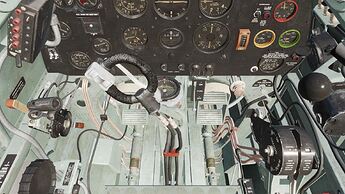 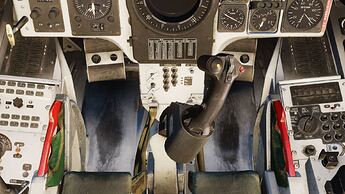 In a flightsimulator rig like my SimBox, where I have a floor mounted stick, these are desireable advantages and I’d like to try and make me a ‘split stick’.

I think the easiest way to do this would be have the pivot point for pitch axis near the floor, and the pivot point for the roll just below the stick… the spitfire’s stick that you have pictured above is probably the most basic of this type… i think it inclded bicycle chains and pulleys

i think it inclded bicycle chains and pulleys

It does, indeed. It has a sprocket on the front of the column, with a bicyle style chain that is connected to wires. Not unlike some airliner control column designs.

Yup, one of the things I liked the Tornado HOTAS for.

bicyle style chain that is connected to wires

So…on a spitfire. You are flying. By wire. They really were ahead of their time

Good idea. As you mentioned, for floor mounted stick, this construction could be much more easier than having everything cramped in one tiny box.

Most aircraft were flying by wire, long before fly by wire…

Maybe someone can help me out here…? [slowly turning my head, looking at @TheAlmightySnark]

Not sure there’s a specific name for this but it’s mostly a solution born from the problem of having a physical split between both axis as they control different columns/rods that transfer the forces through mixers, cables and other such devices to the control surfaces.

Good luck implementing this in the pit! I think it’s feasible and probably hella fun too!

Thx Troll! I was ‘clean’ of any DIY thoughts, now I have to think about this new stick concept

I have been goofing around with a centering concept, using gas springs.
It has a very natural and heavy load feel.

The testbed in the video doesn’t center. I think this is because of friction in the joint and that the gas springs have equal moment arms. Illustrated in red. 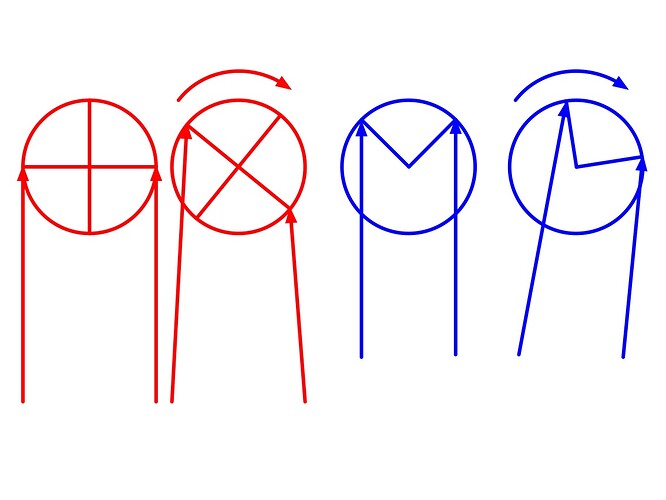 I need a sparring partner!

But talking about new sticks, X-5x family, here is my X55 grip disassembled. Trying to figure out an extension.
In case the extension will not work for any reason, will start with the kind of stick with separated axis. 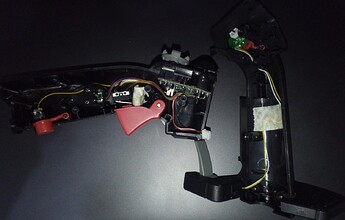 The 90 degree offset is probably better if your range of motion is small enough, a large enough pull and it could go over dead center and that’s not a positive if you want it to self center!

Perhaps go with a more of a dampening system as you would find in the real deal? pulleys and cables with actuators and springs sprinkled throughout?

Yeah, I’m just testing different concepts at the moment.
I’m intrigued by the gas springs as they provide a heavy but smooth feel.
The stick only needs about 60° (30° either way) of travel.

Here’s how it looks with the gas spring attachments above the joint.
There is some centering force, but not enough. But this joint is just a M8 screw through wood, with noticeable friction. The actual stick will of course have bearings.

2 posts were merged into an existing topic: Throttle finger lifts

I’ve seen some on thingyverse & ready-made on Ebay.

Why not add springs to assist the dampers overcome the final bit of friction that the internal spring doesn’t quite do?