I have been tinkering around with some over-clocking my CPU (i7 9800X) to get the best out of X-Plane in VR. Nothing too crazy, just 4700 Mhz using the MSI Dragon software. Anyway, I noticed that while loading a flight with ‘heavy’ scenery such as OrbX True Earth, the CPU Temp can spike up to 104°C momentarily, which is a little worrying, and disappointing seeing as I have a liquid cooler. Something is obviously not working right. Have any of you guys noticed anything similar?

I haven’t looked for it, but I can.
What kind of idle temps do you see? Have you tried running a 100% stresstest?

What kind of idle temps do you see? Have you tried running a 100% stresstest?

Idle temps are in the 40ºC-50ºC range, which also seems a bit high. I haven’t tried a stress test yet. I’ll look into that today. I

I have to admit that I didn’t check it with DCS. I’ll have to give it a try late today.

I also noticed in X-Plane that the temp spiked when flying at high speed over a city. I flew a Hawk from RAF Valley, down to the Mach Loop for a couple of runs, and then down to Cardiff. It was smooth as silk in VR until I got to Cardiff, which is the first decent sized city along my route of flight. Things got really choppy, so I glanced at the temperature, and once again, it was up in the 100ºC - 104ºC range. I’m guessing that I was being throttled back (fortunately).

Xplane 11 sees near 100% cpu usuage when loading for me as well. The temps you are seeing are not normal and something is wrong with the cooling setup.

Which cooler are you using?

For reference I’m on an air cooler that idles around 39 or 40c (damn you Texas summer), and it will get to 80-81 while loading xplane. A water cooler should take a lot longer to rich it’s max temp and the couple minutes of 100% should not be putting you in thermal throttle range. My 9700k is overclocked as well.

Should add mine stays in the 60s while playing xplane. I suspect a fan has failed, the case filters needs cleaning, or possibly the water block has somehow came loose.

EDIT: @PaulRix Just noticed you were using MSI software for an overclock. These programs and the factory bios OC settings often pile on unnecessary voltage which directly translate to heat. What are the vcore settings?

Also 4.7 isn’t exactly mild on that chip. Only 62% can reach that speed with reasonable voltage. Take a look at this chart and see how your settings compare. 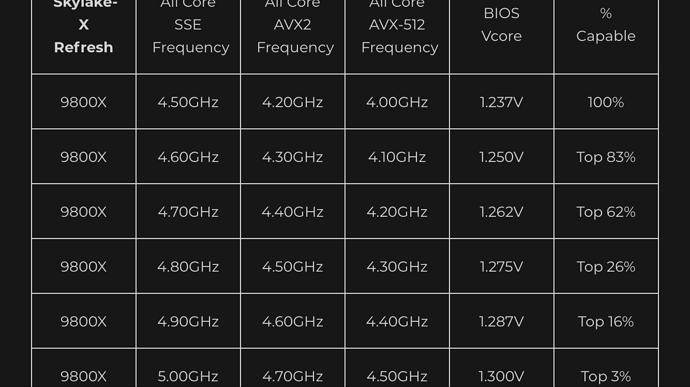 Interesting… thanks for the info. Maybe I’m just pushing it too hard then. I’ll wind it back a little.
I have the V-Core up to 1.29V, so I definitely need to lower that.

also notice all these chips are running with an AVX offset of 3, I’d check that as well. I don’t have first hand experience with this chip, but even if you hit the silicon lottery and had a chip capable of running 5ghz @ 1.3v like the chart says, it shouldnt be getting close to throttling with a good liquid system.

I’ll check that too. So it looks like I am pushing it too hard, and at the same time the cooling isn’t what it should be. That’s not a good combination.

which cooler is it?

Anything over 85 degrees C on Core intel temps despite the throttle happening at around 100 degrees C - just say no!

Am I doing this right?

Here is a guy who gets similar over clock results:

Ha! This one is only 18 months old, so I’m hoping to get some more time out of it ;). I usually buy a new PC on a 3 year(ish) cycle, although this one has a nice big case, and a decent power supply so I might be doing the incremental upgrade route this time around.

Hmmm…well that explains a lot.

Yesterday I ordered an air cooler based on a video by Linus‘ Tech Tips… the Noctua NH-U12A. I was second guessing that order last night as maybe a little premature, but maybe it was a good plan after all.

Here is the video that prompted me to put the order in… skip to 6m 30 seconds to get to the test results.

The only thing more hotly contested than air vs water is intel vs AMD. I’m running a noctua D15 and I’m pretty sure it’s the same thing they used on radial engines in ww2. Its massive. But it also works. I really think you have an air flow issue or the block has somehow loosened for a 240mm cooler to not keep up.

I’ll see if I can tighten it down this morning. I can cancel the order if that fixes the problem as nothing has shipped yet.