So I’m wondering how many cores is optimal? In other words, is it a case of the more the better, or is something like a 5600x (6 cores) enough?

Threads don’t depend on cores.

Even at Idle Windows is running around 300 Processes and around 2800 Threads, depending on O/S Age and Installed software. If this is The only thing in my DCS Christmas Stocking this year…I’ll be a Very Happy Boy!!

I’ve been Very Good…Most of the Year

The main goal is to give the already well-known Ka-50 attack helicopter new features which expand the gameplay.

Coming after this update: In addition to bug fixes, other ongoing work on the AH-64D includes improvements to the external model, AGM-114L, COMM and DATALINK for Longbow Net support, flight model and SCAS improvements, improved IR signature, and “Robbie” fuel tank option.

Coming after this update: In addition to bug fixes, other ongoing work on the Hornet includes a new pilot model, radar performance improvements, improving the flight model and flight control system, and new fuzes/logic.

F/A-18C Rise of the Persian Lion campaign by Badger633

That’s one of The Most Bad Ass intro’s I’ve seen or Heard.Deep Purple

not being able to cook the spitfire engine

HA! knew it! There isn’t an engine in the world i cant ruin

I know a group of over 2,000 users that stayed behind in the Blackshark 1.12 and Blackshark 2 1.1.1.0 Builds and boycotted DCSW (They felt betrayed by the move to DCSW Platform or some such anti-merge w/ A-10C).

They are all moving to BS3, Hopefully not expecting to run DCSW2.8 on a Potato rig from 2010.

My previous potato rig was from 2011 (albeit with an interim GPU upgrade) and ran 2.7 just fine.

I have a new rig with a potato wedge of a GPU
MSI R7970 Lightning, I’m down to one, after having 3 in XFire at one Point.

I still have the old A-10C and BS1 install files before the merger so I feel their pain. January 2009 is when I began in my DCS deep dive. Surely these are worth something, right?

Back in the day, we had to download the files via a torrent. Kids these days just click update DCS and it’s all done automatically. 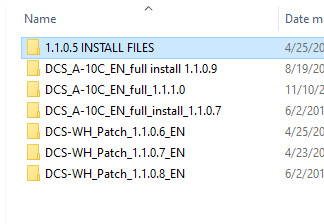 I still have them all backed up.

Me too and the old Nevada map. I have installed it a couple of times just to see how far we have come

Anyone else having the issue that they can no longer remove hardpoints from the Huey? They show off in mission editor but as soon as you load in the helicopter has everything on it.

edit, I just noticed its even overriding @EightBall’s addons for custom payloads. With the Huey being one of my main go to’s this hurts…

Yeah, apparently it’s no longer possible to spawn without the hardpoints…
This method still works though: You can find the custom liveries to remove/add the hardpoints here: https://drive.google.com/file/d/1HjRLKcrN9ik_S5E9mjkFvE6MhQouoxCN/view

Performance seems pretty dang good on my box. I already got it tweaked such that the previous patch was fine, but now looks even smoother.

Man that new blackshark model is sweet! It tickles the plastic modeller in me something fierce to see those panels open up. Well worth the tenner that!