Are you sick of the DCS AI doing stupid things? At least for Air-Ground, I tried to make some improvements: The purpose of this script is to enable the AI to perform efficient air-ground attacks using level, dive, pop-up and offset pop-up tactics. The general idea is that the AI flights must be able to ingress and egress smoothly, when needed adjust...

Do you think it would work with DCS Liberation? That has a number of plug-in scripts (Skynet IADS etc) and it could really do with some better AI ground attacks.

Well it would need to be integrated by liberation, i.e. liberation would have to use it when planning missions. But there would be nothing fundamentally difficult about it.

It looks like Liberation uses a plug-in structure for LUA, which is how they use the VEAF Mission Generator stuff for their missions, so I guess it would be a similar sort of deal: 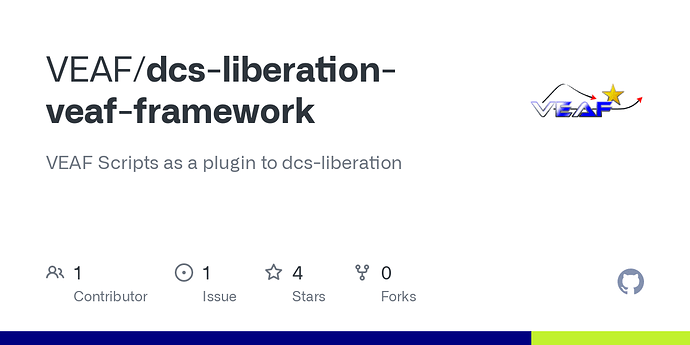 VEAF Scripts as a plugin to dcs-liberation. Contribute to VEAF/dcs-liberation-veaf-framework development by creating an account on GitHub.

As Liberation just builds regular DCS mission files, it is of course possible just to add the LUA reference and then a quick edit on the attack waypoint for a Do Script etc. Might play with it later.

That is excellent man! ED should hire you on as a consultant on some of the AI work.

Nice! You have great patience.

Then I realized, “this stuff should be IN THERE already” and surly they’re about to drop it in anytime, right? That was a year or two ago.

Cool. Just ran a couple of the sample miz files.

I have a ‘thing’ I’m pounding on that adds what I call “atmosphere” to missions (DCS is kind of dead without a lot of work): you can build one (or more) large scale ‘templates’ and it will randomly add stuff from that one file for variety. So far it helps.

Testing in the NTTR right now and I’ve been wanting to include AI working over a bombing range; this will make it more pleasing to the eye (won’t look like the standard DCS AI behavior).