Well they have gone and announced the official block/lot/suite/version of the DCS: F/A-18C as the DCS F/A-18C OFP 13C…

I don’t know what that means other than it should give a good pointer to anyone with access to the manuals (or whatever) what we will and will not see in the release version*. I am looking for some additional information but my sources are limited.

Up until this point in the thread, there is not a lot of information on what the specs, from that designation, would be.

I thought I had read somewhere on the ED forums that JDAM and the JHMCS? helmet were going to be part of the module… of course to find that would be impossible now…

I suppose we could ask @BeachAV8R, I mean he’s flown it already right?

Seriously though, the OFP doesn’t really tell us that much, other than that it added JDAM capability. Which, by the way, good find.

I think it would be a stretch to really derive much more about it based on the OFP alone. I, for one, would be much more interested in which Lot jet they’re modeling as that would tell us more as far as what equipment to expect, IE which radar, which ALE, etc.

That’s all I got.

That first one reminds me why I despise Michael Bay. The way ALL of his movies tell it, the Air Force is the only branch that does anything.

This pod was initially introduced in the late 80s to increase the weapons delivery accuracy of Hornets, and as originally produced included only a FLIR, without a target laser or laser spot search (LSS). The former was originally supplied by the ASQ-173 pod mounted on the right cheek station. In 1993 the AN/AAS-38A was introduced, which fitted a laser targeting device (LTD/R) into one pod. I don’t know if the -38A had LSS built in, nor do I have the skinny on if it has point track capability.

Also If I ask very nicely can we get any low down on whether or not we’re also going to get the LITENING? Where as the Navy uses the Nighthawk and newer AN/ASQ-228 ATFLIR on the left cheek mount, the USMC instead uses the LITENING mounted on the belly station aaaaaaand I can’t help but notice that a company made a really nice implementation of that very pod in DCS.

I would hope so.

I can’t imagine they would handcuff the Hornet to buddy lasing for LGBs.

That first one reminds me why I despise Michael Bay. The way ALL of his movies tell it, the Air Force is the only branch that does anything.

Heh. We all know that the Navy guys just play naked-torso beach volleyball. You can’t expect EVERY movie to point that out.

Your honour, I’d like to bring to you exhibit A.
Thank you @AeroMechanical.

First off, that’s always relevant. Doubly so if you’re underway or overseas.

Second off, remember that it’s now a coed Navy, so this is also relevant:

Coed? What’s coed? Plus I’m kinda sure the ratio of Biel-to-hairy-guy in the navy is actually kinda low…

A coed is someone (of the other sex) you go to school with (also to university).

So- like a mixed gender school? Oh. Ok. Doesn’t sounds so wild…

USMC Jets use ATFLIR on Ships,
They only use Litening on Land

USMC Jets use ATFLIR on Ships,
They only use Litening on Land

That makes sense, maximize commonality where possible. Obviously the majority of bugs on the boat will be Navy so use their pod. On land it’ll be the Harriers and the -Ds.

I’ve definitely seen LITENING’s on the belly of F/A-18s. But since they’re all zoomed in “crotch shots” so to speak, I can’t tell if this is something that is done with C models, or if it’s something they do specifically with the Ds in the VFA(AW) role. 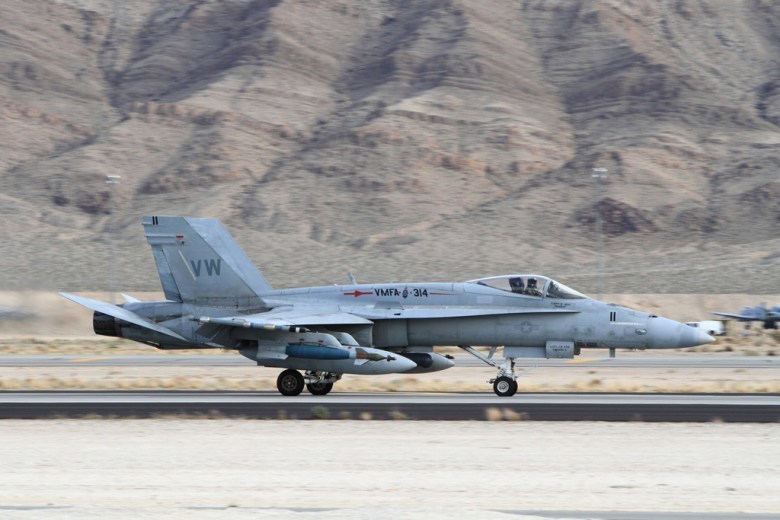 and one on the D

I know the Super Hornets were re-wired to carry Utility Pods on the Centerline,

I’m not sure if that “upgrade” filtered down to the Legacy Hornets.
(But the USMC Obviously has that Ability, and their New F/A-18C+s will be pretty much Super Hornets w/ Legacy Hornet Airframe)

Did the USMC Use Litening from Day 1, or did they provision Litening when the Navy Went with the ATFLIR, that’s the Question…

Because if the USMC Selected the Litening to replace the AAS-38, AAS-38A, AAS-38Bs then it would be a later block than the target ED mentioned,.

That’s the earliest my fly-by-night googling can pick up. So sometime in or after 2004, which would imply it was to replace the Nighthawk. That sort of settles it I guess.

All ahead with the Nighthawk!

I suppose we could ask @BeachAV8R, I mean he’s flown it already right?