So playing with this fancy campaign builder thing here:

I don’t think we’ve talked about this before? It looks interesting for single player or a small MP co-op group. The blurb: DCS Liberation is a DCS World turn based single-player or co-op dynamic campaign. It is an external program that generates full and complex DCS missions and manage a persistent combat environment. [Logo] Being turn based is interesting, as it could be something where a group that can’t meet all the time could do something that keeps progress. Let’s give it a go then…

Thought I’d do a mission and then watch in 2D just to see how it works out. Some mission context:

Here we can see I did an ‘attack’ action on the base on Minakh. I have 4 Falcons, so I selected a Strike mission for 2 of them and a TARCAP for the other two. The E3 can support. My Strike package is called ‘Whale’ (it’s been a rough pandemic I guess).

Off in DCS the team gets ready:

The front-line action (I added some MBT’s on our side) are throwing rocks at each other. As any sensible air force pilot would do, we ignore them and fly off to our target:

As this is an AI four-ship, it’s nice to see the lead actually turn back and wait for form up with the others. Also, what’s with that red smoke, I guess JTAC is going on as well - who knows, I just work here…

Hmm, you know a smart thing would have been to set the TARCAP off before the STRIKE. Next time…

As Tactical Commander I spend huge amounts of energy pretending I know what all these symbols mean. Hmm, hang on - why isn’t there a waypoint over Minakh? Oh uh.

Carry on troops. (eek). The Strike Team to Nowhere form up.

Racoon’s on their way. Ahh the Whale’s are at a hold point until the TARCAP gets there. Neat! Good planning everyone!

Ok, looks like Whale is going for the target, they just need to get ready at the Ingress point. (thank goodness).

In a tragic bit of bad planning, I seem to have left our base undefended. The tanks get here tomorrow. I shall start wording letters with ‘Logistical Delays’ as my excuses. Oops. Revenge us Whale and Raccoon, as you might not have anywhere to land.

The AI just seem to do a single bomb per pass maybe? That seems inefficent.

Yeah, they look done for the day. I wonder if I need to tweak that, as a better default would be to dump it all down. Still, 2 less tanks in the world is good. 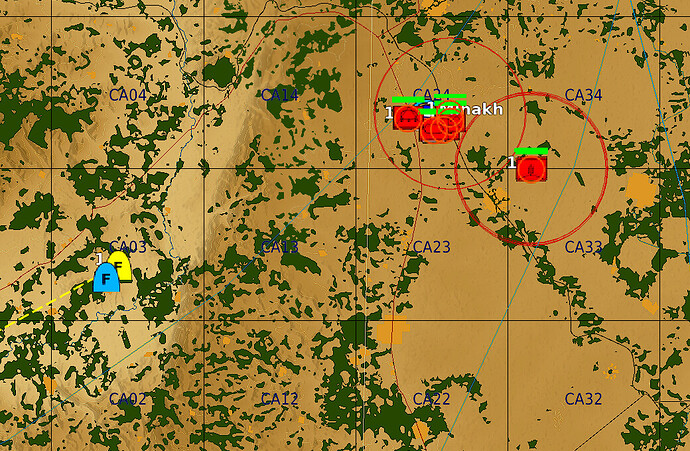 “Hey Eric, you ever noticed that huge hole before where Bill was a minute ago? Strange, I’ll sit here and wait it out I think” 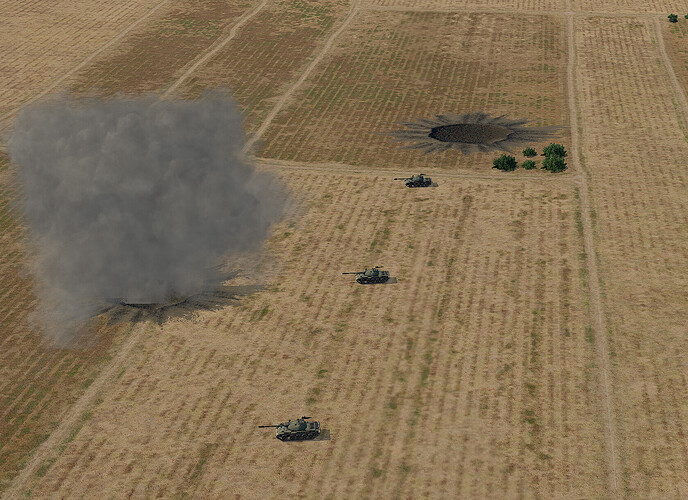 “Probably nothing. So like I was saying, the Amazon Prime Video app is really hard to use, you’d expect them…”

Meanwhile, at home base, the Insurgents move in…"

Whale 1 (I bet they hate those names, so cruel) has a bomb left and remarkably tanks up for gas.

…but at the last minute seems to just Eject and then crash over the home base. DCS AI, don’t ever change…

So without a home base the remaining three aircraft head south for a new home, to the safety of Syria (!). They land at Abu al Duhur, which is marked as neutral Russian base.

I think we can chalk this one up as a loss? Anyone speak Russian?

Here’s the results in full back in Liberation for those keeping score: 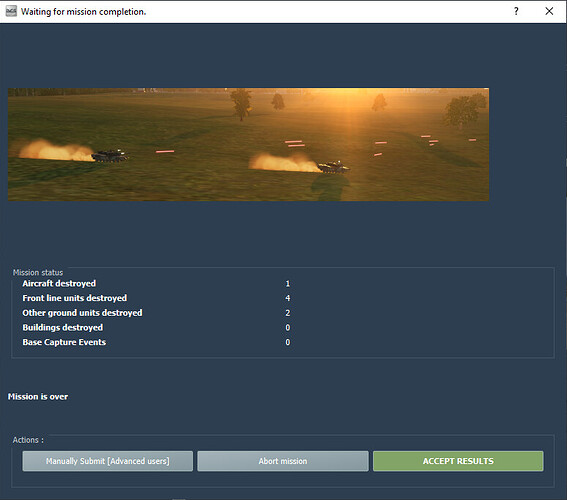 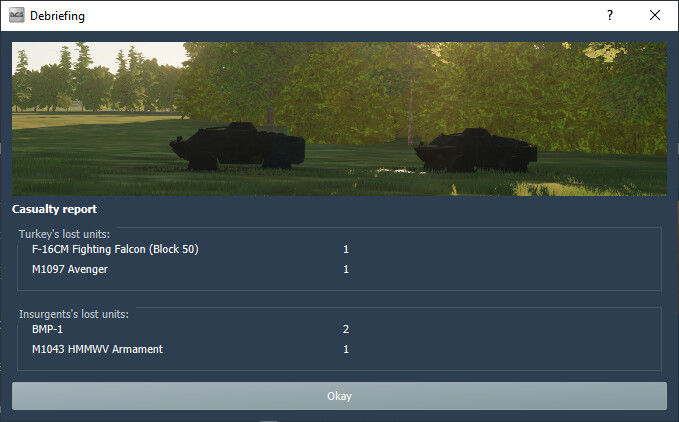 We do have better Intel on the Minakh base though, so an upside!

Hope you’ve enjoyed this AAR. I’ve obviously got some work to do - next time, prepare the base defense.

This system only works on the Syria map or can be applied to others as well?

Any I believe, theres a screenshot of some of the available ones in the linked post up top. 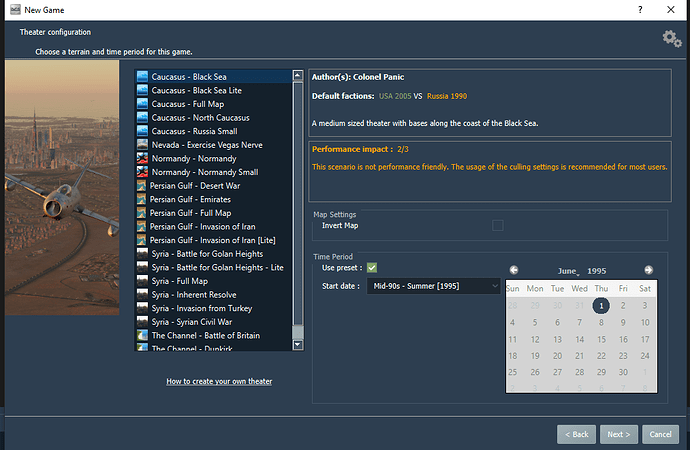 It sort of reminds me of BMS (audible gasps)

Bonus pic of Persian Gulf Theatre campaign - this is a pretty neat tool so far, especially for someone like me that never wants to fiddle with the mission editor that much…

So I saw a guy posting about Liberation on Reddit and he said he is playing in multiplayer. I guess you can run a mission, save the file (or however it generates the next .miz file) and load the next one and keep going at it. Of course…that means you have to wrangle people together at the right time to all be in on it since the missions will be shorter than an open ended server…but it might give more sense of “winning” (cough…or losing) the overall war…

Nice writeup!
We’ve been using this for a while for multiplayer campaigns for various aircraft - started with the A4, then the Gazelle, now we’re doing a carrier ops campaign in the F18.
Works really well for four-six of us to get on Tuesday nights and work through a 1.5-2 hour mission.
If it runs poorly I find deleting units in the mission editor before start does not affect the outcome and improves performance. You can also add stuff in the mission editor and the missions still seem to work fine.

@fearlessfrog I finally managed to read all of the “Liberation” related posts.

Intriguing. To say the least.

It’s just that more than BMS it reminds me of the stock campaign of of the first Strike Fighters 2.
The one that was set in a fictional desert war between to fictional kingdoms (or a kingdom and a democracy- yeah go figure

) and the player was the leader of a mercenary air-force that had to buy aircrafts, fuel, and weapons.

I liked it a lot.

So after reading I have some further questions :

All in all, this actually reminds me a lot of Pat Wilson mission generator for Rise of Flight.
I love this.

I finally managed to read all of the “Liberation” related posts.

That’s just the two of us so far, I think I may have made it too long and scared people off.

are skins automatically (and correctly) added to planes and vehicles?

I doubt it, but I didn’t check.

is it necessary to buy weapons too?

No, or rather they might be supply limited, and certainly theatre/faction restricted, but I didn’t see costs per Mk 82 or anything.

how the hell did the pilot manage to get out of the Viper without ejection?!

I already assume there’s no way to add skill points to AI pilots and crews right? They are all randomly generated AI…

I don’t think so, but that would be a great enhancement. You can edit the per package / per flight parameters before going to DCS, so it might be an option to set AI skill in there - you can certainly use that to set up ‘Client’ slots of MP co-op.

One things to remember is that it’s just spitting out a DCS mission, so I guess any customization and additional tinkering can be done. One you hit ‘End’ on DCS then it imports that ‘state’ of the theatre and you roll on to next turn.

It is a bit like the PW generator. It’s good the source code is available for Liberation, as I see there are quite a few people that contributing. With DCS changing I’d imagine it’s a constant effort to wrangle the AI into doing what you want.