Working from the SO map above and I’m finding some interesting stuff in GoogleEarth.

The place names next to the symbols appear to be the nearest village to the base. Mostly they do not match up to the DCS town names, bit so far I have been able to search on them in GE and then do a visual search for the “signature” of a eastern block military base - walled enclosure with guard towers and standardized buildings in side. Obviously for a helicopter base (technically a base and not a FARP although I’ve been using FARP to designate them) you also need to see helipads.

So this is what I am finding: 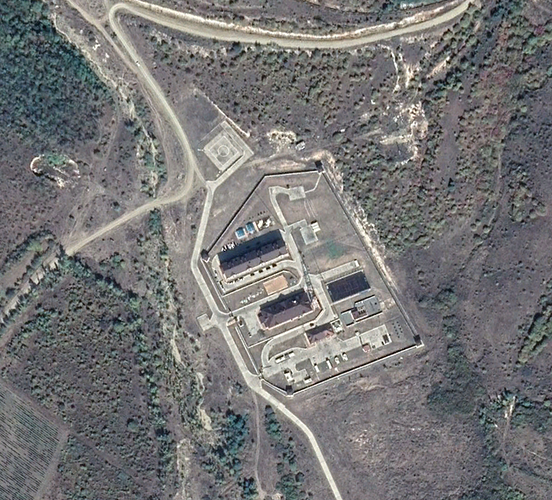 Didmukha FARP - interesting that the helipads are outside the fence line. 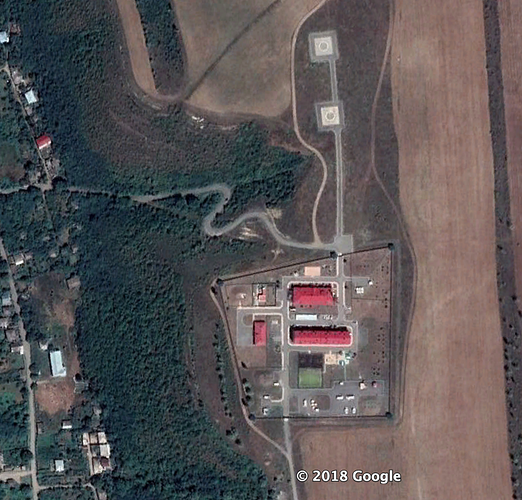 I want to use the Structures available in the DCS mission editor to recreate these bases. The admin, maintenance and barracks buildings are a good enough fit. The single helipad also works if the ground is flat enough that you don’t get a huge “mesa”. I can even use something to establish a small fenced in area. The challenge is the underlying ground texture.

Before I jump down a google and DCS forum rabbit hole, is it even possible to change a bit of ground texture the way you can in FSX?

Not much has been done with the South Ossetia area in DCS. From the view I had 2008, it was the focus of the Russia-Georgia War–essential the axis of advance for much of the Russian forces.

Pretty sure the Mi-8 campaign place out in the SO region with a Georgian Russian conflict brewing.

is it even possible to change a bit of ground texture the way you can in FSX?

Best you can do there is clear out any buildings and trees to make it bare.

Way back in DCS v1.5 there was a utility called Witchcraft that allowed for real time adjustments to map objects. Don’t know if anything like it exists today. Here is my factory complex in the Back Of The Hand mission - 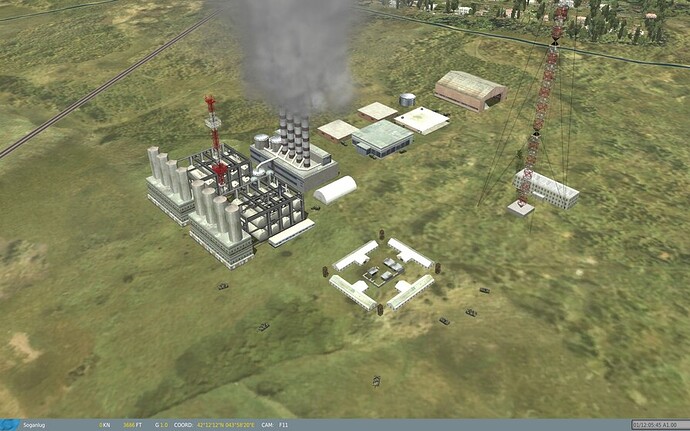 I think that it is still around. I have not tried it in a few years. If I remember right, it allowed you to call lua commands through a network connection to make changes on the server. Technically, you can just do that in a lua script attached to your mission but the feature of witchcraft that was so neat (for me) was using the lua commands to figure out what my mission was doing wrong

I am pretty sure that real time script debugging is still available through a browser window, by connecting to the right port (#?). There was talk that the editor would get map object manipulation …
I googled ‘dcs witchcraft’ and did not see anything new.

I think that it is possible to get some map ids (object like buildings and such) which can then be ‘destroyed’ but I have a feeling that is it.

I’ve got a training/PVP Mission for the Channel Map which might be something fun and different for @schurem 's fight club this week. It features quite a few trains that you can hunt over in France while being shot at by Flak and AAA and a few targets that can be spawned in via the F10 menu: Some German Schnellboote that will patrol the channel and there are some ground targets in southern England if you can’t be bothered to cross the Channel. Requires the WWII Asset pack and The Channel Map. TF-51Ds are included but I have not set up any recon missions for them.

It’s designed primarily with the Mossie in mind so very focused on ground attack. There are a whole bunch of Fw 190 and Bf 109 slots available as well but I haven’t added any bomber raids yet. Antons are set to hotstart without fuel as they feature very long warmup times, the other WWII fighters are set to coldstart as they’ll be warmed up pretty quickly anyway.

This is something I want to try!
I will replace the mossie with a jug though.

There are jugs as well

Not much has been done with the South Ossetia area in DCS.

Uhm, could you make that with the Normandy map instead of the Channel?

Already on it. Initial release will take a little though. Probably next weekend

No rush- I have plenty of time.

I am building it anyway

First rough draft of a sort of training mission on the Normandy map. Not much there right now but I will be working on it over the next weeks whenever I have a couple of minutes to spare. It should already feature enough stuff for the Allies, not much there for Axis except the dogfight lanes.

I will update you guys whenever I have made significant changes but that’s it for this weekend.

Cheers and have Fun!
Normandy_WWIITraining_v0.0.3_CarentanAO.miz (1.2 MB)

Requires the Normandy Map and the WWII Asset Pack