Is the cockpit pressurized?

What’s interesting is the OXY LOW warning light (in red) is not illuminating. It’s at the top of the annunciator panel 2nd column from the left.

Update: It appears the JF-17 has modeled oxygen consumption. When did I miss this feature. Was it always there and I never noticed it? I just flew a few ACM engagements under heavy G/breathing and watched the Oxygen indicator decrease! Now I’m wondering why the OXY LOW light isn’t illuminating. Prolly not modeled, yet or a bug?

Maybe it switched to your pony bottle automatically

So if the cockpit is pressurized…running out of oxygen shouldn’t be a problem. I mean…I guess it would be if you had your mask on and it ran out since you’d be sucking on nothing…but if the cockpit is pressurized and O2 runs out, that shouldn’t be a problem because the pressurization is now providing the pressure needed to breathe normally. An interesting test would be to see if you would black out with the cockpit depressurized with and without O2 available (I guess you could blow the canopy of there is no pressurization setting switch or dump switch?)…

Now I’m wondering why the OXY LOW light isn’t illuminating. Prolly not modeled, yet or a bug?

Was thinking that the other night when this happened because I’ve never gotten a warning in the warning lights panel on this.

An interesting test would be to see if you would black out with the cockpit depressurized with and without O2 available (I guess you could blow the canopy of there is no pressurization setting switch or dump switch?)…

I’ll try this the next time I fly this mission. Will do so either tonight or tomorrow and will report back. I will intentionally stay longer in the AO so my needle on the Oxygen instrument dial runs out. Then try your suggestion.

I just doing some very light research on fighter aircraft…they don’t hold a pressurized cabin differential that is as high (or comfortable) as a civil aircraft. Whereas a plane like a corporate jet might have from 6 to 10 PSI differential at normal cruise altitudes (say the upper 30s)…a fighter jet apparently does not even come close to that. Therefore, they might start using O2 as low as the low teens since that is the point where the cabin altitude (pressurized cockpit) starts to exceed 10 or 12 or more thousand feet…at which point you really should be on supplemental O2. Up in the 30s and 40s they might be showing cabin altitudes in the 20s…so it isn’t nearly as pressurized as a civil aircraft.

That could all be wrong too. It was a quick Google search because I was curious what something like an F-16 or Hornet would do as far as cabin differential and “normal” cabin (cockpit) altitude…

Fighter aircraft usually have an oxygen generation/concentration system (OBOGS or MSOGS in US aircraft) that provides enriched oxygen through the mask. As long as the system is working you are good to go until you start hitting 50,000 ish feet.

Most cockpit cabin pressures don’t get above 10,000 feet pressure altitude until the high 20’s so you do not need the mask on up there unless you have a depressurization issue.
Even if you have your mask off at 35-40,000 feet your cabin altitude is still going to be below 18,000, so your time of useful consciousness is several minutes at least, not the 5-10 seconds you might get at ambient.

I do not know the specifics of the JF-17s oxygen system but if it matches any of the US stuff, the O2 guage running out Probly isn’t that big a deal as long as everything else is working.

I am not familiar with older systems like LOX etc, that you may end up having a distinct time limit on O2, but remember as long as the cockpit is still pressurized you will be fine at most normal altitudes.

If the cabin pressure is below 20,000 feet then your time of useful consciousness, is 30 minutes, so you have plenty of time at that pressure altitude before you get close to passing out

@Klarsnow just hit us with some knowledge…!

Okay, I’ve been playing with the JF-17 a lot for the past month and a half and something has really been bothering me. First, I understand (I think correctly) that the JF-17 was built for operations in and around Pakistan. Which means not really having to fly a long way to or from the AO. I also understand (I think correctly) that the JF-17 does not have a modern OBOGS system on it and actually uses a high-pressure oxygen tank for the pilot for altitudes above 10,000 feet. You run out of oxygen in the tank and you better get below 10,000 feet or you will pass out.

My question is this: In game, when you start out the oxygen tank is filled to a certain level. I.E. see the screen shot below. This is what you start out with in a cold start in the JF-17. 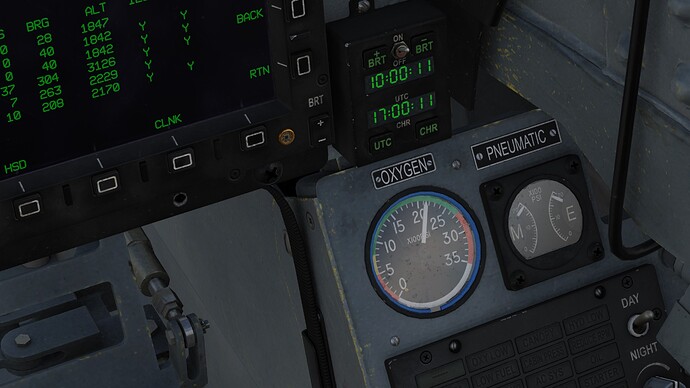 When you are up and flying at extreme altitudes i.e. 30,000-38,000 feet, that needle moves rather quickly and before you know it, your oxygen is running out and you need to head back to base. This makes flying missions with long travel distances difficult. We have the option in the JF-17 to fly longer with the refueling probe but it is the oxygen level which really hampers you when you want to stay in the AO longer. 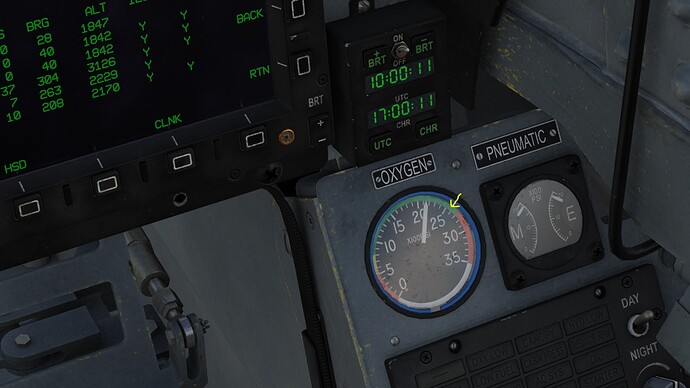 Any insight from those of you who might know would be greatly appreciated.

My dad ran liquid oxygen plants for the USAF many years ago as young Lt/Cpt (supporting operations in Vietnam), I’ll see if he can provide an answer.

Sorry if these are things you’re aware of, but the JF-17 has a couple of differences from some of the other jets:

Hi @Torc , yep I am aware of them. Thanks for replying to my ask for help. I have no problem operating the oxygen pressure system. What I am asking is with a “cold start” jet, why is the needle for oxygen tank instrument reading set where it is at on screenshot one and not somewhere like where I have marked on screenshot two?

There is (as you can see) a lot of “green” area not used on instrument dial and considering how quickly the oxygen gets used up, why not fill the tank right up to the edge of “green” parameters? Is this how it is done in real life? If so, why? If not, is this a mistake made by the developer?

In game I could really use that extra “green” amount of oxygen in order to lengthen my flight time in the AO.

Awesome, sorry I can’t help further! I honestly mainly use the JF-17 below 20,000 ft so I haven’t encountered the issue.

I also seem to make a lot of one way, no landing trips with it… that’s another story …

I know next to nothing about liquid O2 systems, but I can tell you on the jets I’ve flown, the oxygen bottle pressure is very temperature sensitive. In the summer in Arizona, it will creep into the red (and could possibly blow out the pressure relief disk) if was fully topped off the day before in cold weather.

That said, you almost never get it fully topped off, because in the process of servicing the oxygen from the gang bottle service carts, the oxygen in the bottle is compressed and becomes hot, which artificially raises the pressure for an hour or so (there’s actually a limitation on flight for a certain period after servicing due to the oxygen temperature in the maintenance manual).

So after servicing, even if it’s in the red slightly, an hour later it will be back down to near the top of the green. Then at altitude it will read much lower because the bottle becomes cold soaked.

I’d say that if it works anything like a traditional oxygen bottle then that gauge looks about right to me. LOX might have some major differences though.

Another consideration is oxygen consumption rates at higher cabin altitudes will be much higher than at lower ones.

Most interesting @WarPig . So it actually may be correct then. I will have to try and experiment with flying heights in order to see if flying lower altitudes in the simulation actually does slow down rate of oxygen consumption. Be neat to see if that was actually modelled in the DCS.

So I’ve experimented tonight with the JF-17 travelling at lower altitudes, between 22,000-25,000 feet and it DOES make a difference in the rate of oxygen consumption compared to travelling above 30,000 feet. The rate as you have stated @WarPig was much, much lower and my oxygen lasted with more than enough to spare travelling the long distances from home base to the AO and back.

Kudos to the developer and Eagle Dynamics. That is so cool that it is actually simulated. My mind can rest easy now regarding this issue.