Dipping my toes in the VR pool, what to get?

Let me start out by saying my primary aim for VR is for casual gaming, with VTOL VR being probably the only FS title I’d be running. It’s more seeing if it’s something that I am interested in pursuing as well as seeing if the wife is interested. She’s an RTS gamer so neither of us are sure if she’d be that interested in anything VR related.

I know there were issues with facebook integration at one point for certain devices, etc. I am looking for something midrange, to just test it out before I commit. Yes I know I’m going to buy twice if I like it, but I’ll need t a GPU upgrade if I get serious with it anyway.

When I was shopping around, about a year ago, I didn’t consider the Occulus because of the Facebook ‘requirement’, the Index wasn’t available in Australia (but stupid expensive anyway) and of the rest, the Reverb G2 was best value for money. Also, because I was going to use it exclusively for sims (seated) and not FPS shooters, I didn’t really need ‘outside - in’ tracking with ‘lighthouses’. So I bought the G2.

Even though I had the issue with the ‘Mark 1’ cable and AMD motherboard, HP replaced it free of charge with the updated cable - It only took 24 hours from my enquiry to having it delivered

Since then I have no regrets and now can’t even consider playing a flight or driving sim without it.

I’ve owned the Rift, Odyssey 1 & 2, Reverb G1 & G2, and now the Quest 2. I’m forced to use it because the Reverbs don’t work with a 3090 Ti, but I’ve really grown to like the Quest 2 for it’s simplicity, quality construction, bright image, reliable software (never glitches), and wireless capability, although I usually use it with a cable. If the Reverb G2 would suddenly became compatible with the 3090 Ti, I’m not sure that I would go back, being that it’s a WMR headset. There is a lot of satisfaction about just putting the damn thing on and having it work every time. The Reverb may have a slightly better image, but I don’t really miss it. Yeah, and looking forward to the Quest 3.

Agreed. While I love the image quality I get in the Reverb G2, I think overall the Oculus Rift was a better total product. The controllers were phenomenal (until one of my joysticks went a little funky, wore out), and the tracking was better. WMR is… not ideal.

Have to agree with the statements above the, I have had the rift and now use quest 2, they are great for ease of use and price … as for the Facebook thing just make an account and the forget about it … you don’t need to be active on it

I have only ever used WMR headsets: they used to be the best pixels for your buck until the Quest 2. I can safely say they are not what you are looking for:

Just get a Quest 2, use those Facebook subsidies to get the best gateway drug to VR at an unrealistically low price.
If you want to do it without Zuckerberg, the Vive Pro and Valve Index are good options too. Valve Index has the best hand-VR interaction with those grip sensors but it’s not cheap.

I dearly love reverb G2 and haven’t noticed any problems with the hand controllers. On the other hand, I’ve hardly used them at all, as every time I get more than ten minutes of playtime I tend to fire up DCS to blast a couple sabres.

Isn’t the Oculus Rift/Quest/Quest 2 all inside out tracking as well? I never noticed any issues with controller tracking, in fact they were very good in Boneworks and HL:A when getting stuff off my back even.

So I wasn’t aware there were issues with the different hand tracking systems. Good to know.

The Quest 2 seems right in my price point, I apparently am just in time for the price increase too, yay.
As a PC gamer, is there any reason to go with the larger storage space version of the Quest 2(256 gb rather than 128gb)? I’m naturally inclined to say more storage is never bad, but if it’s not needed no sense wasting a DCS modules worth of cash for it.

Besides what comes in the box, anything else I need to purchase to use the Quest 2 with a PC (cables, chargers, etc)? Might as well order it all at once.

Honestly when I’m talking about tracking being better on the Rift, I think the head tracking itself is slightly better too, not just the controllers. Not that the Reverb G2 tracking is poor, it’s just something I noticed running both back to back.

The hand tracking is hands down (haha!) better on the Rift S, IMO.

As a PC gamer, is there any reason to go with the larger storage space version of the Quest 2(256 gb rather than 128gb)?

No. It only stores games to be used in stand alone mode. Anything with teeth will be on your PC’s storage. So space on the headset is not a factor.

If you get the quest and go wired (as I always do) just be aware that the wire dangling past a sensor will cause little hiccups with the left controller when the wire blocks line of sight. Seated, I grab a bunch of wire and tuck it under my thigh so that it is less likely to interfere. This only matters in VTOLVR and, in my case, X-Plane.

I use a usb c cable with a 90 degree plug on the headset end then use a Velcro tie to hold the cable to the side strap on the quest, running the cable over my should and down behind my chair
No dangling cables

I’ve got a Rift S, and so the grips are different, but something like this will make a huge difference for both room scale and standing VR activities! Best accessory for VR, by a large margin!

I have a G2v2 , which works well for my DCS-only usage .
However , for the OP’s use case , a Quest 2 would doubtless be better .

Also, back to the Oculus Quest, just know that it isn’t a comfortable as the Rift or (so I am told) the G2. There are accessories to correct that which others will chime in on. Being cheap, I bought none of it. Instead I use tightly wound TP (that’s toilet paper) which I stuff into the nose-hole. My nose then comfortably supports most of the headset. Inelegant, but for me and my nose, it works well and stays comfy for hours.

the head strap on the rift was far more comfortable than the fabric straps on the quest, but its still ok, even if i do look like a scuba diver after a wihle 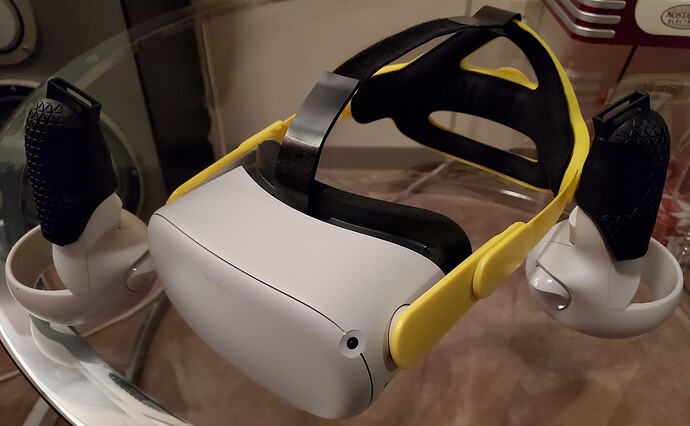 You can find all this stuff cheap on Amazon. I like the bigger gun type grips for my big hands. I also like the fixed head strap or whatever you want to call it as you just slip it on and it slips right into optimal position. You always want the lenses dead centered with your pupils.

I think you’ll be pleasantly surprised at how intuitive VR shooting is. Once you’re set up, PM me and we could hook up on Discord for some coop room clearing. (Onward also has a radio that you activate by “squeezing” the mic button around where your shoulder is.

) C’mon out and teach this old dog some new tricks.

(sorry to bring up training in your off hours