Bit of a nuisance indeed. They are built for gentlemen, doctors and nurses, not for living in a jeans pocket next to a swiss army knife and a lighter. I must have broken two or three.

Slightly off topic, but my daughter can hardly tell the time when looking at an analog clock…

A good opportunity to learn binary?

I tried, but they think what I do for a living is boring.
Can you imagine?-)

I still wear a watch. Right now (lately) I’ve been wearing a Garmin Forerunner 935. I like it for tracking running and riding and heart rate - and a bonus feature is that it actually HAS the time on the face 100% of the time (well, when you are just wearing it for normal wear). I don’t like watches that have motion activated, pop-on, features…I just want it to be showing the time all the time. I use it all the time in the cockpit…a phone is way too bright sometimes. 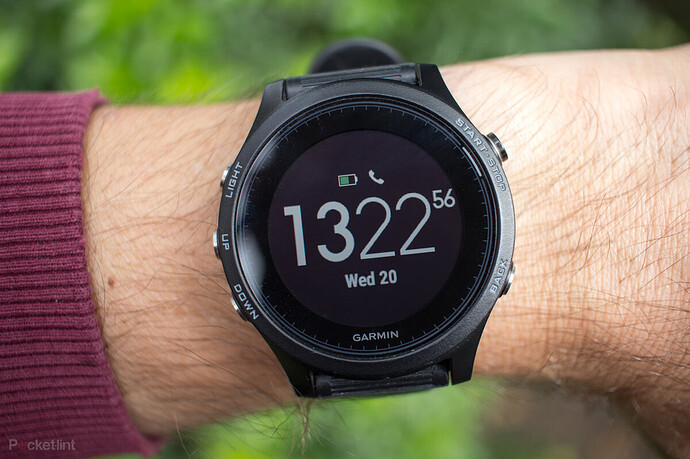 I have a beautiful Citizen Blue Angels Eco-Drive in my drawer that I need to revive. I was given that as a wedding present…I love it. 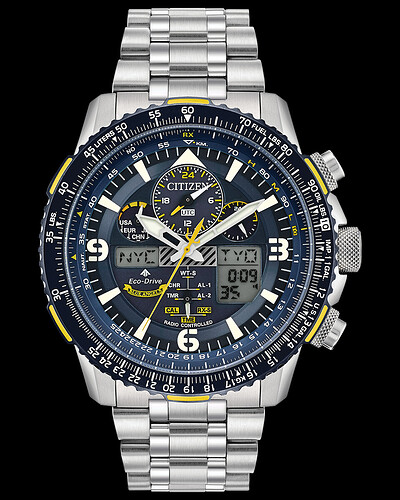 So yeah…there are a couple of us left out here!

I came across the Junkers line of old school styles watches.

That’s a beauty…clean and functional…

The other thing I like about my “Junkers’ is that it is easy to see in low light conditions. The numbers, hour and minute hands glow in the dark. It has a pretty neat engraving on the back of a JU52 and the watch face is finely corrugated in reference to the corrugated skin used on the airplane. Not really of any functional value, but it adds some interest I think. 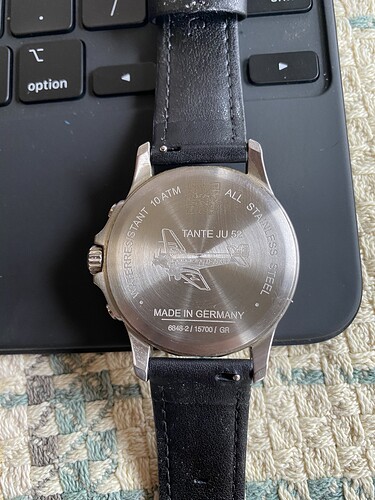 As for my dream watch… one day I’d like an Omega Speedmaster, the watch that went to the Moon. Like @Bearhedge, it isn’t high on my priority shopping list. One day though! 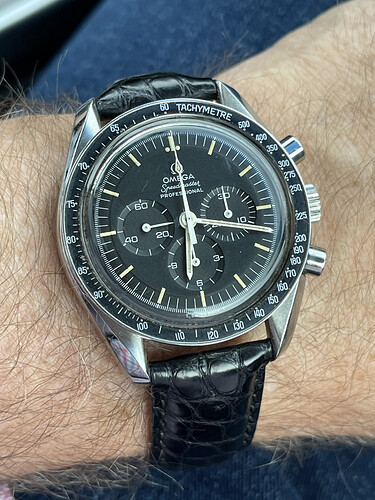 Taking her out tonight for dinner. Daily is an Apple series 2 or a Casio G Shock. 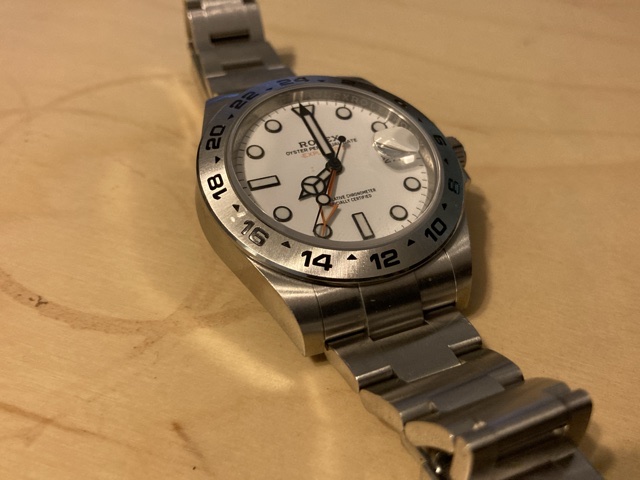 I bought this as a gift to myself when I achieved a goal at work. 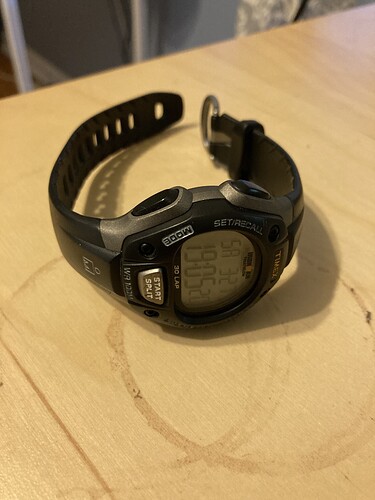 But nothing is more useful than a trusty Ironman!

And I do think a watch will always be essential for me. I’m a bit obsessed with time.

Nice! It’s a timeless classic with a great link to history. As I said, one day I’ll have one.

I joined the army when I was 18 years old. I turned up at my Depot Regiment to begin basic training in Woolwich, London wearing one of those fancy digital James Bond watches with red numbers.

On our first parade a sergeant-major who to do this day was the most terrifying human being I have ever met in my life noticed it on my wrist. From about 1cm from my face he screamed and yelled at me until I almost shat in my pants. I took the watch off in front of him and I’ve never been brave enough to ever wear one again. I won’t tell you my age but it still sends shivers down my spine now.

Just use a G-Shock for daily wear these days. Keeps time reasonably well enough, easy to read quickly(shiny hands over a dark background), and has a stopwatch function.

It’s not the fanciest looking or the easiest to adjust but it’s rugged enough to not worry about it getting banged or scratched up.

I really enjoyed it otherwise, the fitness features are nice and it was great having an altimeter displayed on the main display with the time.

I’m dying laughing at your predicament Camembert. Did you tell him that you had a license to kill?

I’ve been wearing this watch since the 1980s. Occasionally it’ll wear out and such and I have to buy a new one. But I’ve worn this style for 30-35 years. lol 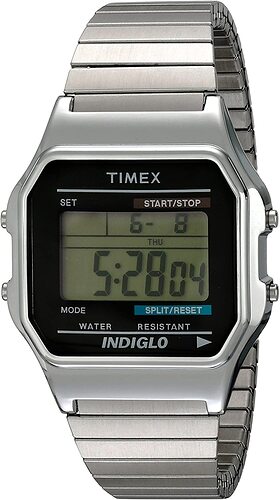 I remember Indiglo technology. :ROFL I had one too!

They were my dream watch when I was young. But I told to my self that I cant aford them

So little later I bought that Tissot.

Now this is style I like. No chronographs. Simple clean design with thin frame.

There was a period when I did not wear a watch, between smartphones becoming ubiquitous to the point you feel naked without one, and smart watches becoming a thing.

I backed the Pebble Time steel on Kickstarter and wore it until its vibration motor stopped working. Now I wear another Time Steel I bought second hand.

My daily watch is an Orion in the classic diver look. Being an IT guy and around perfect clocks a lot, a few years ago suddenly the urge to possess a mechanical machine hit me. So this automatic was my choice, because Japanese watches are good and very good value.

It really has a mind of it’s own. The first year it would be quite accurate, about 1 minute a week too fast. Then there was a phase of it being even more accurate for two years or so, followed by a sudden change to being too fast by one minute a day.

But just recently there was another change from one day to another, so for the last 4 weeks I did not have to set it once. And today it was off by 10 seconds! That’s almost scary. If it wasn’t for DST, I could just have let it go on untouched. 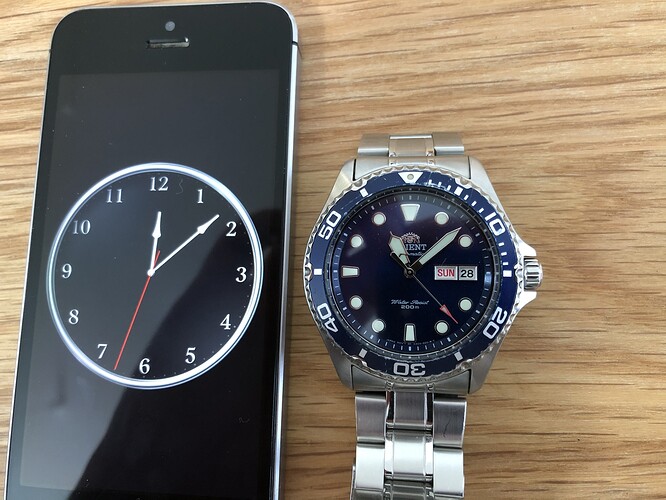 I got two other watches (quartz and smartish), but too lazy now to get pics - maybe later

And the Sunday watch. Cheap, Simple, but I like it. Battery driven. 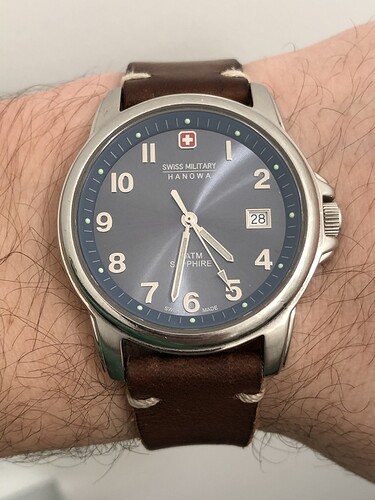 @fearlessfrog I have that same binary watch! Haven’t used it in a while and now really only wear my running watch, a garmin forerunner 235.