Does the bag of rice trick work?

I got caught in a heavy downpour yesterday while on a bike ride. Until now, my iPhone XR hasn’t had trouble with a few splashes. But when I returned, facial recognition ceases to work, the cameras looking cloudy, and the charging port is inop due to moisture.

Apparently this is a myth but I don’t suppose it could harm to try, good luck

Turn it off, remove the back cover and battery and let air. PCB’s get damaged when there is moisture on the electrical traces that allows it to corrode or short circuit.

Best to leave it like that for 48 to 72 hours in a place with not a lot of moisture in the air.

Rice does not work.

Thanks, but I’m not sure that I’m brave enough to split the case on an iPhone. Looking for a video…

you could try packing it in a sealed bag with some of that silica gel, in a warm area…

Pulled it out of the bag of rice. I’m on vacation, so put it on my car’s dash and pointed it into the sun

. Packing up a cooler and heading to the beach. Will be next to impossible, but going to try not turning it on for a couple of days. Cheers.

No worries, I’m sure his wife (or mistress

) takes better care of their phones LOL! Too soon?

I once accidentally washed my iPod Nano as a kid with my laundry. I always made sure to check my pockets before even taking off my pants let alone washing them, except that day apparently.

So it got washed and I tried the rice trick and left it for a good day or so. It was fried. See, I also had the habit of making sure the battery was fully charged. So it got to short out a full battery during that wash cycle…

I have had friends who were those 1% means I don’t have to chart yet type successfully use the rice trick after a drop in a puddle.

I also once got a single drop of Cola in my Razer Blackwidow Ultimate keyboard about 6 years ago maybe 7 and it went haywire. Took the PCB out and left it in front of a dehumidifier for 72 hours and it’s been working to this day!

Also, I’m guessing there’s probably a tamper seal inside if you open it, so hope heat will help- and I’d recommend turning the USB port upward when trying to dry it out, once you’re sure all the water has drained out.

Best of luck, and enjoy the vacation!

Take it to Arizona. It’s a dry heat.

Thanks, but I’m not sure that I’m brave enough to split the case on an iPhone. Looking for a video…

@Navynuke99 the Iphone has a IPS 67 or 68 rating for most models so should be water resistant in most conditions. The XR should have 67 and thus not get damaged in a heavy downpour.

I have more than once been caught in a torrential downpour on my motorcycle with my iPhone XR. My phone is in an Otterbox Defender case and sits screen-facing-in, lightning port down in my interior chest pocket. While somewhat protected, the jacket is perforated leather abdomen with venting above.

image1512×2016 1.84 MB
Alignment here has the phone’s top behind the ON of the logo and the bottom just behind the top of the perforated panel.

image1512×2016 1.57 MB
You can see the pocket opening on the right of the image, the phone ends up behind the mesh above the lower interior pocket in the bottom right.

In both cases I was completely soaked, and the phone had water on the screen, in the upper speaker and down by the ports.

I am guessing I managed to stay on the safe side of “the border” between OK and damaging unlike @chipwich‘s misfortune.

On that note I did find this info @chipwich:

Service for the liquid damage to an iPhone or iPod isn't covered by the Apple One-Year Limited Warranty.

If you have AppleCare+ it seems you should be covered by the accidental damage policy:

Learn how to set up and use your iPhone. Apple experts can help you troubleshoot issues, connect to wireless networks, and use iPhone apps.

If not, it appears non-warrantable so no loss in cracking it open if you feel comfortable working on it if a thorough dry out isn’t enough.

Also, warranty is more then one year in the EU, that’s just some marketing bullshit people fall for but warranty can’t be denied outside of that period without reason. Though they will surely say you’ve exceeded the IP67 specs, they use dodgy indicators on the inside to indicate that.

They’ve setup their systems to deny as many warranties as possible unfortunately but if you prepare you can beat em down a few notches!

It would be good to know exactly where to breach was. I’m suspecting that it was the speaker at the top of the screen, since facial recognition failure was the first indication that something was amiss. When I cycle, I have a rigid mount on all of my bicycles that hold the phone horizontal. This has worked fine in rain before, so perhaps the speaker was hit by the “golden BB” rain drop? Wish that I knew. It was coming down pretty hard near the end of my ride.

Likewise, snow skiing and other damp activities have never been a problem.

The good news is that I am only a couple of months from having the thing paid off, and could probably use the threat of switching carriers to get an early upgrade. The camera in my wife’s iPhone 11 is really spectacular, especially doing things like using flash to light foreground subjects when they are brightly backlit. My XR does it, but the fill seems to blowout the subject, where hers does a better job metering the foreground.

On the other hand, one of my Apple worshiping brothers says that a new one is not far from dropping.

Found this article which suggests that water resistance may decline with age. raises hand

which suggests that water resistance may decline with age.

Yeah but less then 2 years seems excessive. Any decent seal should be able to hold for that kind of age. It’s probably worth probing a bit. If nothing else you get a nice revised phone that you can sell on to reduce upgrade costs!

When I cycle, I have a rigid mount on all of my bicycles that hold the phone horizontal.

I’ve been using a top tube bag to keep my phone in the top of. It is just barely functional from the standpoint of being able to hit buttons to skip Pandora songs, but it does keep the phone dry and visible. I don’t need the phone for data stuff since I’m using a Garmin Edge for all that. And I do recommend AfterShokz air headphones (bone induction so you can still hear traffic)…they have really made my rides more pleasurable. You just have to hope Break My Stride comes on at the bottom of the climb… 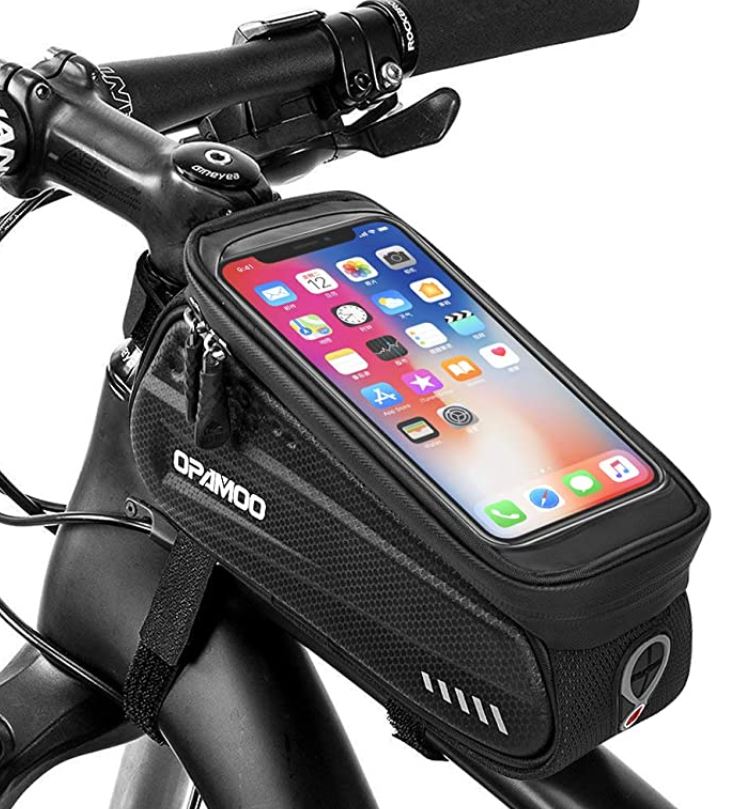 Didn’t think about it until your mention, but I was listening to Puddle of Mudd when my phone got waterlogged

Didn’t think about it until your mention, but I was listening to Puddle of Mudd when my phone got waterlogged

“Flood” by Jars of Clay…LOL…

Another very effective method is to put in in a vacuum, like under a bell jar with a pump to lower the internal pressure - this boils away the water. The lower the pressure, the lower temp for water to boil away. (And hope no residue is left behind.)