2018 photos and one of my friends who really love Falcon 3.0 even if we fly nowadays Falcon BMS. 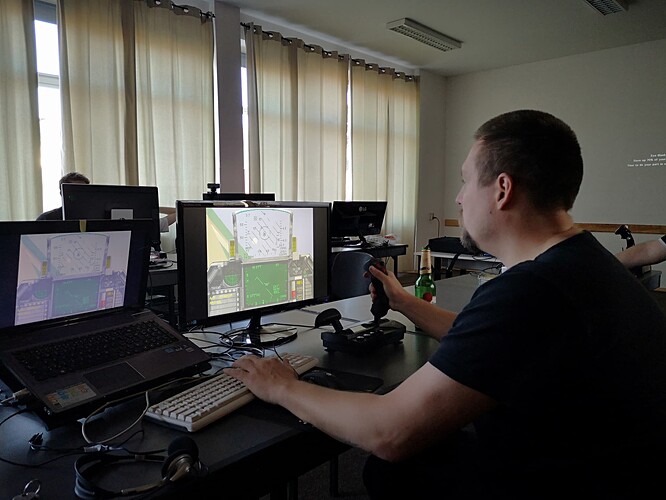 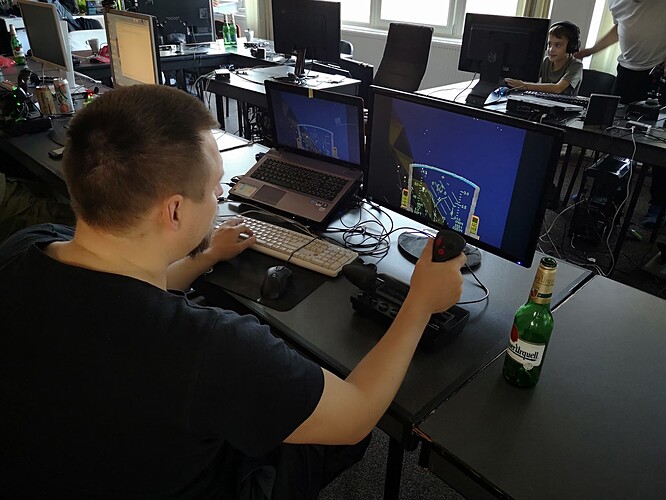 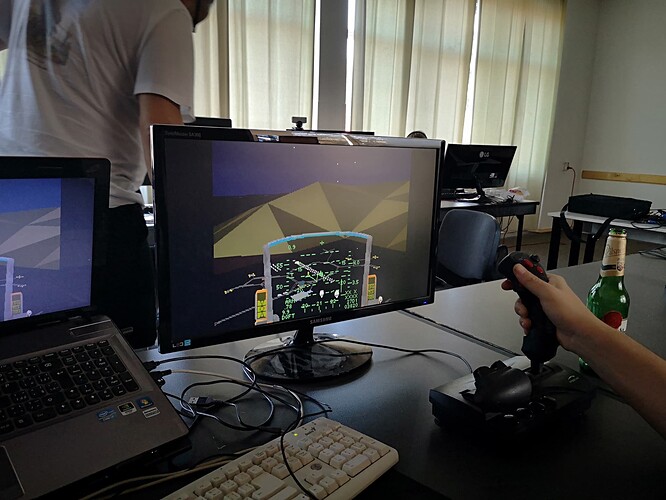 My collection of flight simulators in 2018 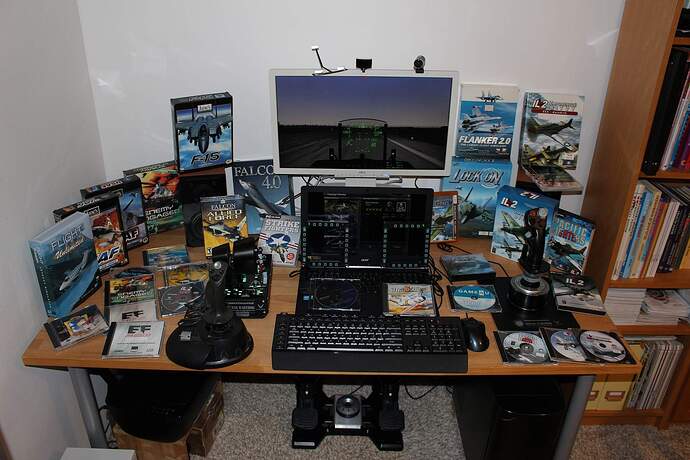 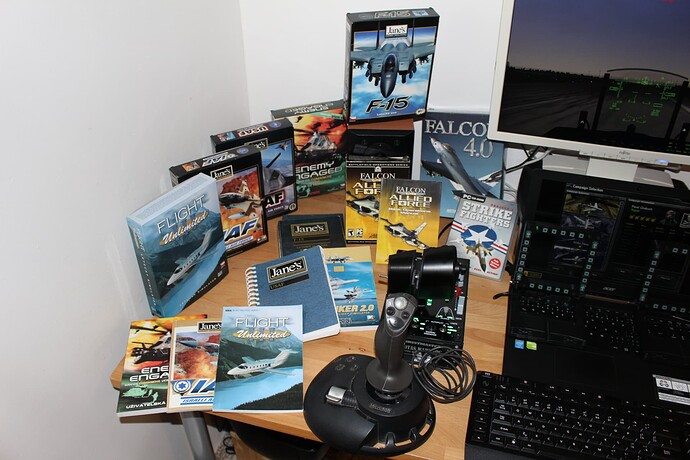 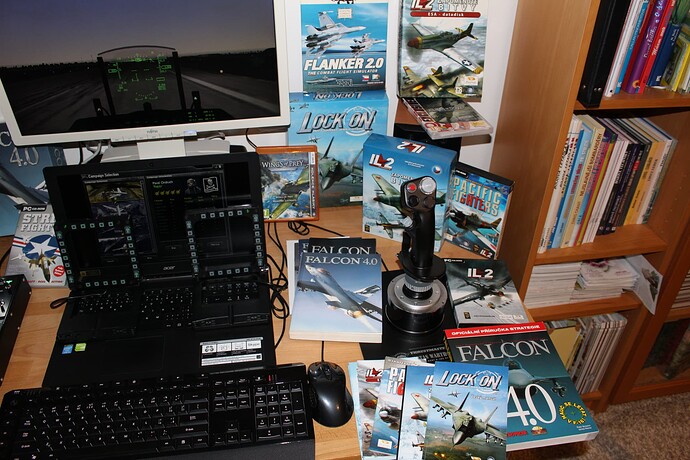 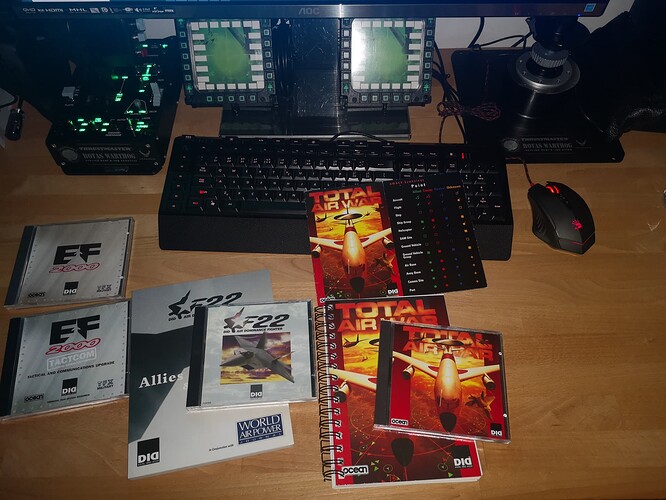 That’s some fine collection you’ve got there. I think I never shared photos of mine here on Mudspike, so:

Some pretty old classics from late 80s and early 90s: 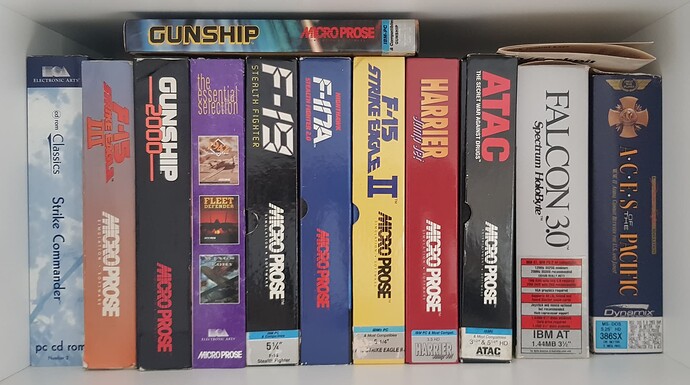 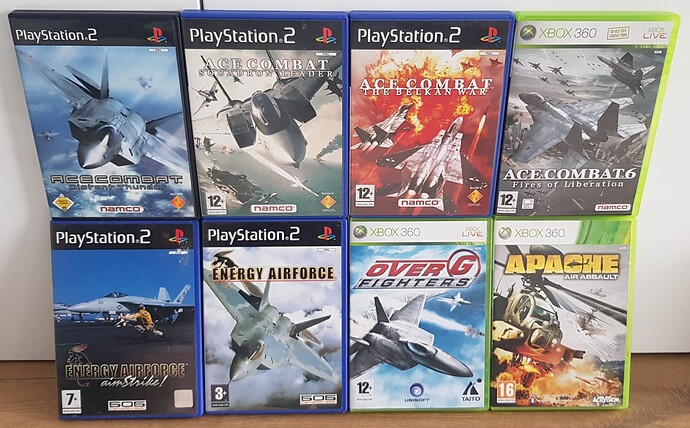 The pics are from a year ago, in the meantime the collection has grown a bit.

Nice collection! Despite the controversy, Back to Baghdad made it on my all-time favorite list because of its innovation and fidelity. First was the suggested retail of $100. People thought that price was crazy. I paid a fraction of that. I believe I got it for around $40 or $50, I also remember many thought the FM was broken because it offered a realism many of us never experienced. In fact, the sim initially received several negative reviews because of the complexity of the FM and radar. The FM was verified by several real-life Viper pilots, which was good enough for me, and a couple decoded the radar operation. The manual was flimsy and inadequate but a rewritten manual was later offered (I believe for an extra cost- It’d been a while). The lyrics of the theme song were one of those riffs that got stuck on repeat in your head. B2B was not Falcon 3.0 but it was definitely an interesting simming experience.

I think my favorite feature was the ability to run a monochrome monitor as a dedicated MFD display. As a tech junkie, I happened to have an extra gfx card and mono monitor lying around, so naturally, I plugged in. Wow! I think wrangling with B2B made me a better sim pilot.

Rumor has it MSI did not return to the commercial market because they started focusing on military contracts, which paid mucho better.

Anyway, forgive me for the walk down memory lane but your collection brings back a ton of fond memories. I used to keep my boxes but ultimately got rid of them due to space. At least, I still have my manuals. BTW, I enjoy watching your Youtube videos.

feature was the ability to run a monochrome monitor as a dedicated MFD display.

I remember wanting B2B because of this! Never did try it though…

As an old Wing Commander fan it warms my heart to see both WC3 and WC4 and also WCP on that shelf with the flightsims. Great games.

In fact, the sim initially received several negative reviews because of the complexity of the FM and radar.

Thanks for that! I only played B2B for a short while long time ago, I will have to give it another go sometime soon. I think I have that first manual, because it’s pretty bad.

I also have WC1 and WC2 with their expansions but only in jewel cases (some later budget CD releases). Was recently replaying WC3. Still a fun game, seeing Mark Hamill and Tom Wilson always brings a smile to my face.

Some of the WC3 bloopers were pretty hilarious: 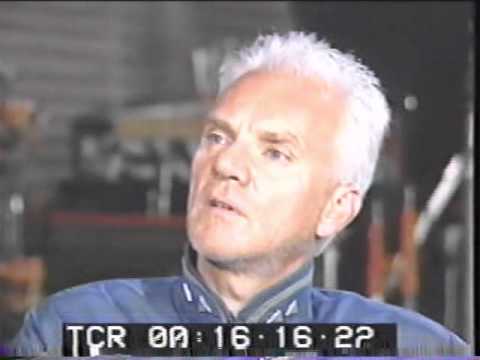 Nice collection. I like it! Unfortunately I sold the most of my oldest flight simulators in past due to lack of money. I regret it now. Nowaday, because I’m not primary collector, I’m still thinking if I take money and will buy it on ebay, etc from foreign.
If somebody have it please contact me. At least I would like to collect Janes and DID titles.

PS: I also like your videos on YT. Maybe, I will try to make some videos when playing dynamic campaigns in TAW or EF-2000 or Falcon BMS.

BTW do you know that fenomenal MIDI music from DID F-22 ADF and TAW can be turn on on Windows XP x86? If not, please check following tread How to configure original midi music in F-22 ADF/TAW on old HW - F22: ADF / TAW - COMBATSIM Forum

I spent a lot of time to run all those old sims on different HW/OS. Old HW is still my hobby.

I remember wanting B2B because of this! Never did try it though…

No real loss. While it was a fun experiment, B2B was competing against too many awesome sims at the time. Talk on the bulletin boards was only real hardcore simpilots stuck with it. Truth be told, I was and still am far from hardcore. LOL.

Agreed. Back in those times the market definitely had so many sims, there was something for everyone. I spent most of my time with study sims Falcon3, Tornado, and the Janes stuff. However, I also had an assortment of survey sims that allowed you to jump in, destroy stuff, then go eat dinner.

That’s absolutely true! I love those times, not like nowadays. Only DCS World modules and Falcon BMS if I will not count relatively new and amazing Microsoft Flight Simulator 2020 (well + X-Plane).

I don’t remember exactly how many hours I spent in Falcon BMS 4.xx to learn + practice skill to be able to survive in dynamic campaign mission because at least in our virtual squadron we fly always safety and if possible with goal to survive like real pilot of F-16 (you know if you survive and plane survive without damage you can fly next mission). I suggest something betwen 50-150 hours.
And now for example Falcon BMS 4.36 has completely new AG radar (and now really with realistic view) and I need to learn everything again.

My first simulator which I bough was USNF 97 which and I few times flew on my friend AMD K5 computer before I bough my first PC in 1998. Do you remember those times when to have PC at home was not standard?
In the other hands to be honest to learn and read DID EF-2000 manual + TACTCOM manual in 1998 was personally for me very difficult due to limited knowledge of English in past. I bough EF-2000 DOS version bigbox with TACCOM CD and manual inside in second hand shop.
There hasn’t been common to have a internet (well I remember 56Kb modem and you had to paid a lot of money to use internet at least in Czechoslovak/Czech Republic) or specialized forums and other fly enthusiasts who could to help me when I was begineer.
I remember that I had to ask my sister to help me translate many pages in manual and I never, never will forgot on amazing feeling when successfully released LGB and hit target in training mission.

I had feeling like I’m real NATO pilot and I was really proud onself!

Later I was also pround onself when first time successfully land on carrier with Su-27 in Flanker 2.x. Amazing times! I felt like pionner on wild wide west.

Nowadays fly enthusiasts have much better conditions then we had. HW is relatively cheap (well ehm except Nvidia RTX 4000 series), HOTASs or joysticks are cheper (especially in compare with wages in my country in 1998) and fast and reliable internet connection is standard almost everywhere.

I guess not, but that MFD on a separate monitor really hit home with me, who always wanted to build my own cockpit

Nowadays fly enthusiasts have much better conditions then we had.

True. And while the 90’s were fun and produced many great flightsims, we have never had it better than we do today.

True. And while the 90’s were fun and produced many great flightsims, we have never had it better than we do today.

I have been reading this thread with great sadness looking at so many games that I have literally thrown away because I couldn’t sell them when we have moved house and had a (forced) declutter.

I was wishing I still had them and could fire them up on DOSBox, but now realise how disappointed I would probably be if I did. Just like those old movies I loved as a teenager but is a big mistake re-watching now.

I don’t want to bring you down, but some of those old goldies are still really fun to play even today. I usually am flying old sims recently because I don’t have enough time to fly a proper sortie in DCS World (even if I liked to, sadly).

Recently I had some time so I fired up DCS and I continued one of the DLC campaigns for the Tomcat. After cold start and getting to the CAP waypoint, I presume I failed to hit some trigger (or maybe recent update broke the mission) because I flew for 30+ mins without anything happening…

As was mentioned above some old (let say childhood) films or games can be still good like for example: Iron Eagle (1986) movie or Jane’s IAF (1999).

A many of 90s simulators are still great with lot of fun.

Yes, of course nowadays simulators like DCS World (modules), Falcon BMS, IL-2 Sturmovik Great Battles or civil Microsoft Flight Simulator 2020 are games with much better graphic, better physics everywhere in general, better weather conditions, better sounds, better flight models, they are close to real planes as much as possible in case of avionics, simply almost with better everything except few crucial factors which are:

On the other hands today’s simulators doesn’t has usually dynamic campaign system with one exception: Falcon BMS but only because it was inherited from original MircroProse Falcon 4.0 (1998). So replayability is always very limited and I would say especially in DCS World missions to be honest.

Other things which looks like not important nowadays but can make great atmosphere is music. DID TFX, EF 2000 or F 22 ADF/TAW or Janes’s Fighter Anthology has a midi music which is still great.

To be honest, taken long time then DCS World get better communication. Compare radio traffic in old Janes’s IAF/USAF and especially in F-15 (F-18) or DID EF 2000/ADF or especially in TAW with DCS World and I think that DCS World still has a space for improving even its better than was.

And finally, in 90s you bought simulator like Jane’s F-15/F-18 or DID EF 2000/F-22 TAW and you get complete package. You don’t need to buy DCS module F/A-18 or F-14 module to be able to do naval operation and DCS Supercarrier to get the same what offered Digital Integration F/A-18 simulators in 90s (super detailed simulation of crew on carrier).

DCS World show us the way which is personally for me difficult to follow. You need to buy plane modul, map module, carrier module, almost everything what in past was include in one package.

I cannot understand how Eagle Dynamic could accept UFO like is Pakistan’s JF-17 module which is out of real fidelity.

BTW all this is also +/- valid for nowadays IL-2 Sturmovik Great Battles although there is price model more acceptable and you always get more content in one package. But compare it with possibilities in original IL-2 Sturmovik Forgotten Battles + datadisk. EAP and Pacific Fighters deliver together with additional later in IL-2 1946 version.

It was mentioned, I’m sure at least thousand times. 90s flying simulators provided different kinds of simulation in case of fidelity or time which you had to invest to. Simply plenty of mainstream simulators not like nowadays only hardcore like BSM + DCS or arcade like Project Wingman and Ace Combat. Nothing between this doesn’t exist right now.

Combat Air Patrol 2 is obviously dead, don’t about fact that they promised me press copy which developer never delivered in times when I wrote following article for Czech games magazine. Výlet do historie a současnosti leteckých simulátorů - Zing

I wouldnt be so critical here. all more modern modules in DCS are more or less ufos to some extent.

Nothing between this doesn’t exist right now.

it seems like its not financially viable. many game studios just went out of business (at least sim business) after they released their top sims - F4, TAW, Jane’s F18, Enemy Engaged, Super Hornet, …

… same with CAP2, if it sells like hot cakes it will be around and kickin’ imo.