Tens of thousands of passengers are affected by "deliberate" disruption at the airport.

I can see drones being completely banned in the next year In the UK.

Pretty sure it’s already against UK laws/regulations to operate a UAV near an airfield without prior authorization.

I mean the outright banning of the sale of drones to non professional and licensed users. But things like this are why we can’t have nice things

Thing is that UAV tech is very distributed and easy to use stuff. It’s not a cat that’s going back into the bag at this point and most of the laws and regulations affect the traditional RC flyers than they do the troublesome modern multirotors and drones. End result is the troublemakers are still going strong while the traditional flyers are just giving up, which sucks because a lot of the really nice planes were fun to watch.

Yeah. The writing is on the wall for recreational drone users I fear. If you fly by the regulations, you are definitely doing the right thing. The more advanced drones (like my Mavic) sort of make it hard for you to screw up by limiting the altitude, and not allowing you to launch within 5 miles of an airport. I think (I haven’t tried) you can bypass those safeties though, and for sure lots of other drones don’t have such sophisticated limiters.

Soon, there will be a drone/commercial aircraft accident and the hammer will fall. And we will all be either forced to take classes and get certified and recertified, file some sort of drone flight plan, and perhaps even be required to have some sort of ADS-B out capability. It will suck.

Update apparently this was 2 drones according to the BBC.

Bad news all round for people trying to fly in and out the capital. Stansted and Luton are gonna be absolutely hellish in the morning… Thank god I’m flying the other way tomorrow with my view restricted… Not that it’s matters bumbling around at 2500 ft lol

In the USA, recreational drone users are already required to pay a fee and register with the gov’t. There’s other rules, like no flying above 400ft, VLOS rules, etc. Some of those make it hard for certain aircraft like gliders, which tended to operate outside of full scale routes due to necessity anyways. Same is true of traditional RC aircraft as they tend to require a certain amount of space and prepped fields. Conventional helicopters rarely flew high anyways and are a handful to fly to boot, more than a real helicopter.

The regs were made up in a way to punish those who were being irresponsible with the ubiquitous cheap quadcopter types, but ended up being harder on the traditionally safer parts of the hobby without doing much to dispel the malicious users.

Edit: OK that was a stupid comment. Nothing I can do about the things anyway.

Flown responsibly they are really great. Flown by morons however…

The only way to deal with this is by applying very stiff penalties if you are caught doing something irresponsible like flying over a busy, international airport.

Edit: OK that was a stupid comment. Nothing I can do about the things anyway.

Not much to worry about, honestly. RC is dying and has been for a while; in its place you’ll instead have to deal with Amazon delivery drones. Both me and my brother in law have gotten out of RC; I still have most of my planes, but I’m planning to get rid of a few this coming spring. I’ll make some of the more memorable and smaller ones like the Curtiss P-6 Hawk wall hangers/ceiling hangers.

The only way to deal with this is by applying very stiff penalties if you are caught doing something irresponsible like flying over a busy, international airport.

Part of the issue was difficulty in tracking down drone owners. The FAA requires you to put a piece of paperwork with PII on/inside the aircraft, but problem is that most people weren’t doing that except people like me (name and phone number were required by the AMA). Most of mine needed a proper runway save for my Cub; given that, most fields and clubs were located well away from existing infrastructure like airfields. Some clubs used an existing field but they coordinated with the tower out of necessity.

As I said earlier, it sucks because we were seeing some pretty interesting aircraft over the past couple years. I put together a Nieuport 17 and a Bristol F2B that were incredibly nice. Also have a Stearman that was made for glow engines but converted it to a 6 cell electric. Sadly, never got a chance to properly fly the F2B, but the Nieuport and the Stearman were excellent flyers. 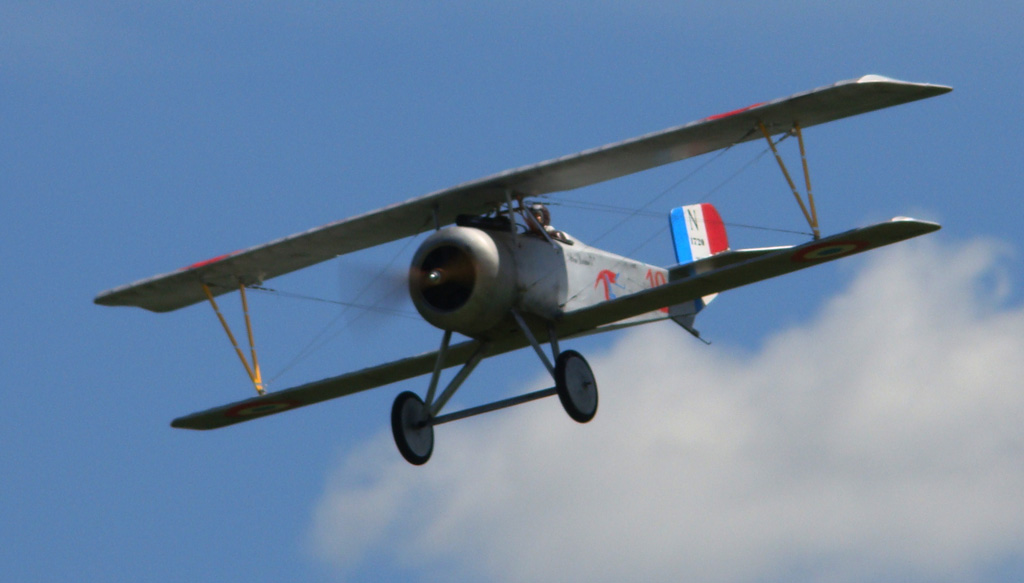 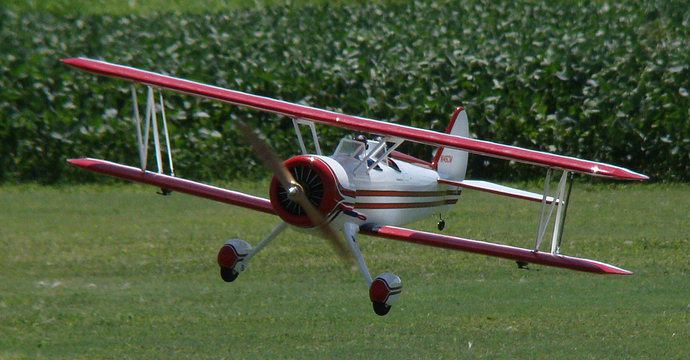 I know I am nearly alone here. But I dream of the day these things are treated like crack cocaine and TNT. Tightly controlled at best, illegal at worst. I fear smacking into one more than inflight fire, unCFIT, structural failure or other threats that more typically get pilots’ attention. With RC, it is impossible to take your device past LOS. And although I have taken an extended break, I am a fan of RC. Drones on the other hand can go anywhere and no amount of begging for proper behavior is going to stop them from going wherever their less honest users wish them to go with zero accountability for the results.

On the other hand, I really enjoyed @BeachAV8R’s vacation footage. I was so impressed that I showed the family on our living room TV. I am torn. I don’t want to see my rights taken away. And I shouldn’t be so quick to wipe away the freedom others enjoy. It comes down to accountability. If I buzz your house, it is very easy for you and the FAA to track me down and ground me. If these things could be designed with unbreakable user ID’s, there would at least be a level of accountability that would mitigate bad behavior pretty quickly. But we all know such control is impossible.

But I dream of the day these things are treated like crack cocaine and TNT.

They’ll be going that way for the average user, not for the commercial ones. I don’t know if the delivery drones will be any better or worse to deal with, but I suspect those will make up the bulk of low altitude air traffic as time goes on.

The FAA has been pretty inept in dealing with unmanned aircraft for some time now, which is scary considering that’s the future of aircraft, like it or not. Their hamfisted approach to RC hobbyists hasn’t garnered a lot of faith in their ability to deal with the changing nature of the things.

Cool heads gentlemen, cool heads. Whether a prank or terrorism, this was obviously criminal behavior and although seemingly difficult to apprehend the perpetrators, not impossible. There are plenty of good laws in place.

I googled: number of flights per day worldwide?

According to ATAG, there are roughly 100,000 scheduled flights per day globally. To this we must add general aviation, air taxis, military, and cargo. In the US, scheduled flights are 1/3 of all flight (according to NOAA). Extrapolation would give a worldwide total of 300,000 daily flights.

As far as their stealth, they tend to be noisy due to the fact that small propellers running at an rpm high enough to move a sufficient volume of air for flight is going to be loud, regardless of the power source. That’s one of the challenges of drone deliveries.

I understand if you fly a small aircraft that striking a 2 lb object at say 130 kts would result in a high amount of kinetic energy focused on a small spot. That why there are laws in place to license and mange hobby aircraft above .55 lbs.

Anyway, statistically I don’t see it as much of a threat at this point. Geese? That’s another issue all together.

Man, if only I had that kind of money! I could probably afford to buy a real plane for the cost of that stuff!

FWIW most 2.4Ghz transmitters only go to 5-9 miles at the most and require a LOS since the signal isn’t powerful enough to go through obstacles.

FWIW most 2.4Ghz transmitters only go to 5-9 miles at the most and require a LOS since the signal isn’t powerful enough to go through obstacles.

No no. You need the 433 MHz radios to get out there. I dabbled with it for a while, but realized that it was not only illegal, but not really much of a challenge given the gear available now.

Here is a little old 88 klm flight. There are a bunch on YouTube. I’m sure the feds have a good time with these.

Reminds me of any incident that occurred in Afghanistan back in 2011 when a C-130 collided with a RQ-7 UAV inflight. 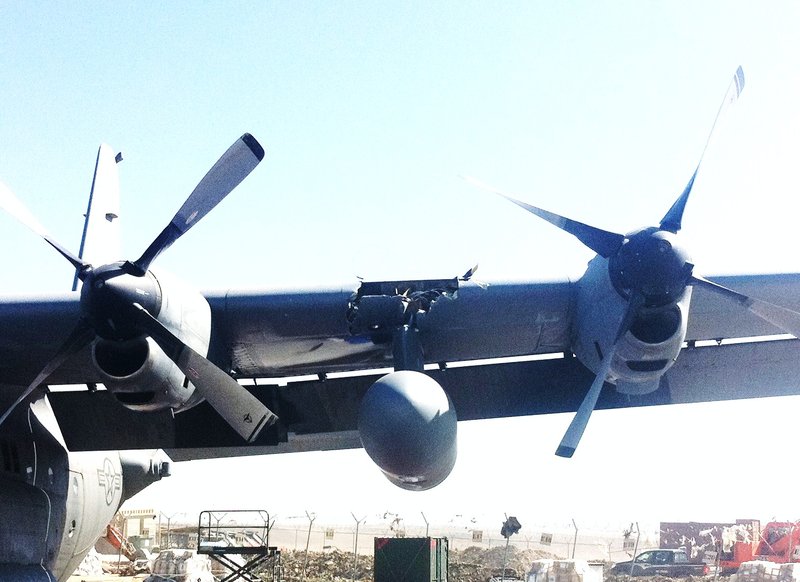 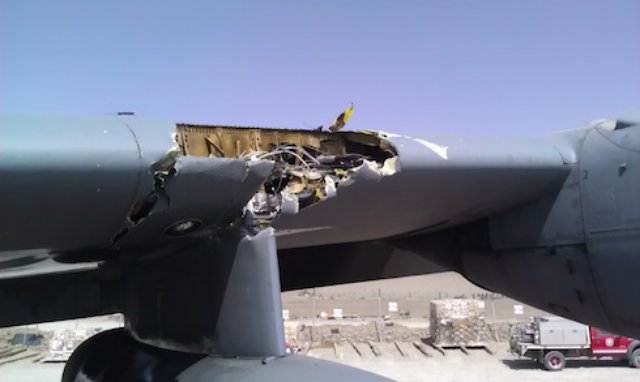 Hopefully we won’t see pictures like this from the civil side anytime soon.

My memory is not great and I’m not in a position to search at the moment but I’m fairly sure I remember a video of a drone banging off the wing of an a320 a while back on final… I may have the facts wrong there though.

Tens of thousands of passengers are affected by "deliberate" disruption at the airport.

Well, a quad/hexa/octacopter could easily be used as a weapon of terror. Not that I think this was an act of terror. More likely some fool wanting to get some cool pics or videos, without considering the consequenses.

a drone banging off the wing of an a320

If it’s the same one I saw, it was fake. But there have been collisions.

This is just from a week ago.
Not yet determined to be a «drone», but substantial damage and no blood… Undead birds?