Also - I got some wheels! Exciting!

Cobra Mk.III can nearly perform any task.
It may lack some cargo space but that’s what wingman come in handy for.

Cobra will be fine to start. After you make one run, you will have enough money to buy a larger ship so you can haul more at a time. One asteroid generally yields about 15 void opals, so make sure you get at least 15 tons of cargo space. The opals then sell for 1.6 mil a piece, so one short trip will yield over 20 million.

I’ve enjoyed mining in the python the most. Has enough slots to hold all the mining equipment and about 160tons of cargo space.

I’ll be around this afternoon if you want to get on. Shoot me a message or just post what time is good for you.

It was my 1st ship I purchased. You can easily do everything you need with it. I did mission running and dabbled in bounty hunting until I got enough for my DBX. Once that was purchased I went out exploring.

Come to think of it, Since my Desktop is back up and running Im currently still in my Cobra. Damn, Looks like I got more grinding to do!

I seen to still have my adder! I was dreading starting over again. I have 300k as well. Nice

Thanks! I’ll set out to find and equip this list - I assume you’re in US timezones? I’m NZ (GMT +13) so may be challenging to find a time together (combined with my baby duties) but see how we go!

Ok - I’ve been at Countdown, New World and Pak’ n Save and I think I’ve got most of the groceries now.

Discovery scanner is an ‘integrated’ module now, if I’ve understood correctly - comes as part of the default ship functionality?

In terms of the seismic charge launcher and abrasion blaster, should I fit 2 of each to the weapon hard points or retain some defensive capability, i.e. one laser and one multicannon?

I have a fuel scoop and a planetary approach suite installed, and I’m out of space - which one would you leave home to get the collector limpet installed?

if you are in game now, I can join in and talk you through it, probably easier.

you only need 1 of each for the abrasion blaster and seismic charge launcher, so you can leave the weapons if you wish. I dont think you can remove the planetary approach module, so you may be stuck with no collectors.

I’m am but just about to hop off unfortunately, need to put dinner on. Thanks for that - it sounds like I’m just about there with the equipping, I think!

yeah, the discovery scanner is also a must, you have to enter FSS mode and fire a probe at the planet rings to determine where the hotspots are. Worst case scenario, you just make a trip with out collectors and i can use my setup to scan the rings. You can bust asteroid up and manually scoop the fragments. After you collect 10 or so, you should have enough to buy a bigger ship like the Asp Explorer, which has plenty of space for optional internal modules.

Gotcha. I misunderstood that the discovery scanner was a ‘default functionality’ rather than a module you have to install, I get it now.

I guess it doesn’t matter too much if it’s just one trip - but here’s what the capacity is at the moment: 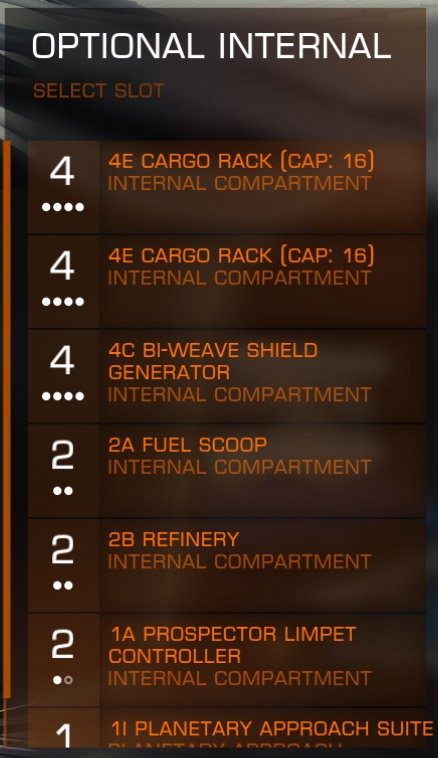 In order to fit the discovery scanner, I pretty much have to dump the fuel scoop. Are we going far?

if I drop one cargo rack, I can fit a collection limpet also, but then I’ll only have 16 slots / tons of cargo space rather than 32 if I do.

Edit: It actually does look like they’ve integrated the advanced discovery scanner into every ship, if I read the forums correctly. Might explain why none of the stations where I’ve looked seem to have them for sale.

So I’ve been wanting to give the Anaconda a go, and I’ve also wanted to try scaling up my mining operation. So i figured, why not both? So I Grabbed a 'Conda, slapped so core mining gear on it, christened her the “DeepWater Horizon” and started blowing up some 'roids. So far so good.

And a few other random shots.

@Gunnyhighway, how did you do that trick with the time in your post?

Because that is NAF (neat as frollicking)

Well I played around for 4 or so hours last night and had zero problems.
it was interesting stepping back into it after so long away.
I have much better hardware now and the rudder pedals made it a lot of fun to fly around. Docking was a breeze! That was something I always felt I could improve on and I definitely had more fun than I had previously.
I only have my Adder (Victor Meldrew - English people might get the joke) and I’m up to about 520k after flying a few basic courier missions. Also landed on my first planet in LT15574 which was quite satisfying although I did just sit there for a bit looking out the window and then buggered off again into the black.
I didn’t have any cause to shoot any weapons which was nice as that was something I had great difficulty with last time (should be easier with my stick and pedals though)
I’m now furiously reading guides to give me a jump-start but I can’t thank you both enough for helping get me going it was very irritating watching everyone having a great time and being left out of it lol! I will upload some screenshots when I actually get more than 10ly from my starting point and get exploring!
OH one more thing! I’m taking notes on each system I visit. Only a few basic things at the moment but it’s quite immersive and adds something to the whole ‘explorer’ feeling of it. Might not be totally necessary but I liked it anyway

Basically from what I understand, they combined all the exploration scanners into a single Discovery Scanner. You can discover planets with no module, but you need the discovery scanner module in order to use the Detailed Surface Scanner which will allow you to fire probes to map planet surfaces and rings. You have to be in analysis cockpit mode to use this feature. You can check to see if you have his capability by checking your fire groups. You should have an option to fire a Discovery Scanner, DSS, composition Scanner, etc. It looks like you may need a bigger ship, because it might be frustrating mining without collectors and a discovery scanner. I would recommend dropping one cargo rack and the fuel scoop for the first run. You can probably find a station near your mining spot to drop the fuel scoop off at and exchange it for the collectors and vice versa. Also, don’t forget to pickup LIMPETS before leaving the station. Done this several times myself and it makes for an embarrassing long flight back to the station empty handed.