Plus, you need a Federation rank permit of at least ‘Petty Officer’ to be able to visit Sol.

I don’t need an excuse to use Elite’s beautiful Galactic Map. I’m pretty close to Sol at the moment, although there are a few places to see on the way: 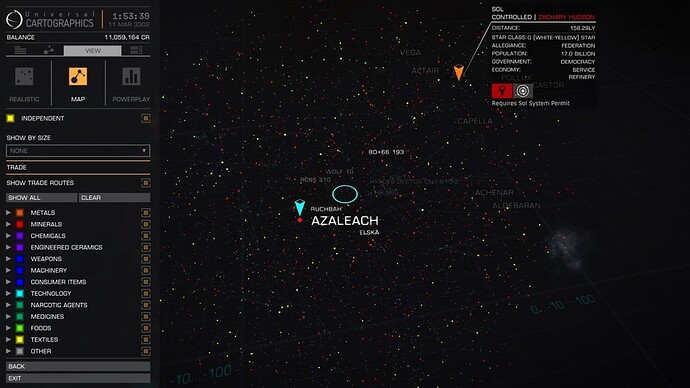 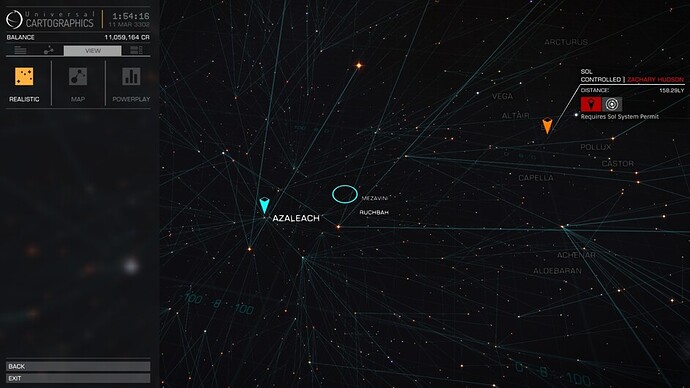 I’m still in my original hangar. I haven’t moved.

In space…can anyone hear your scream spaceship rust?

So If I am mining with a Cobra, are prospector limpets required or will they just take up precious cargo room?

Prospecter limpets are very, very strongly suggested. You don’t need them, but if you use a prospector on an asteroid, it increases the yield significantly. And honestly, they’re the same limpets as the collectors, just require the controller. As for running out of space, just fire prospectors at rocks, and you’ll clear out the space. I wrote up a thing about mining a while back. It’s here:

So, had a couple of people asking about mining in Elite Dangerous, so I figured I’d make a quick introduction and create a place to answer questions. First things first- ships. For me, there are few finer ships than the Imperial Clipper for use as a miner- large cargo capacity for carrying large amounts of cargo and limpets, multiple internal modules for refinery, propector, and collector controllers, high speed and maneuverability for quickly and efficiently moving from rock to rock, and stron…

Sweet. I just wasnt sure, a lot of things I have read said dont even bother mining unless you have 100 plus cargo hold.

I honestly think it depends on distance from mining ground to selling point. And honestly, it takes a while to fill 100 tons of cargo space full of mined materials- 50-60 tons can net you several hundred thousand credits, after all. Missions make a difference too, so I’d say look for a station you can get allied with quickly, that has pristine metallic planetary rings very close by. Don’t even bother with asteroids- you won’t get nearly as much yield from them.

Anyone on this morning, running some mining ops in a nice little area where you don’t get pestered by pirates if anyone is interested.

Anyone on this morning, running some mining ops in a nice little area where you don’t get pestered by pirates if anyone is interested.

I’m non-revving. I’d rather be doing just about anything other than this.

Awwww beach… you need to let the inner miner out, you get to wear a hard hat with a little lamp on top and bang on rocks. You love it you know you do

Well the call is out there, I am online now can do anything (as long as its not mining for Beach who is an anti rock elitist)

edit Beach, have you actually moved your ship yet… and have you taken up home in Skrippo ?

I haven’t launched Elite in a year probably. I have too many rabbit holes around here…lol…

I find your lack of eliteness disturbing. 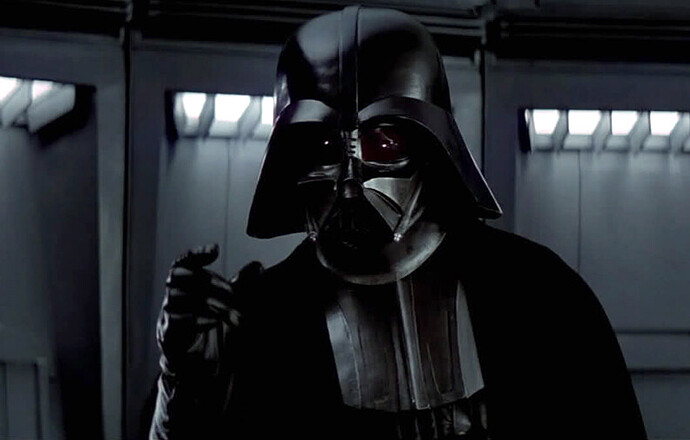 While waiting for Westworld to come on (Pacific Time, damn you spherical planet!) had a spare couple of hours and decided to play Elite, as it had been a while.

Had some fun doing the ‘Sale of the Century’ Community Goal.

I’ve never really seriously done ‘trading’ in the big ol Space Trucker style, so wanted to try something new. In this CG it seemed like the profits were really in the ‘tiers’ of stuff hauled rather than pure profit on the goods sold, so I bought for the first time a T-7 Transport, filled her up with Cargo holds for 264T of goods and then found a 2-hop route (the B class FSD could only manage 12ly fully laden. the T-7 needs large pads and supplies nearby ran dry quickly) and got trucking.

In VR it is really immersive etc, but it makes it harder to watch/read other stuff while trucking. I was tempted to play around with some helpers that put a browser in the VR view, but it was also nice just to drink a beer and look at the screen normally too. After about an hour of back and forth’s (plus a few interdictions, of which I used the ‘fearlessfrog manoeuvre’ of RunningLikeHell™) I had hauled about 3172 tons. That might put me in the top 25% which nets about 18.5 million ferengi credits. That is actually more than the entire T-7 cost to buy and kit out, so the CG’s do seem like the best way to make some cash, especially if you don’t play that often.

The CG looks close to finishing, but it is still probably worth delivering 1T of clothes or something and making a quick 1 million for nothing. Can buy a few sidewinders for that.

Ships Names (on the outside of the hull) have been confirmed. Doing this Community Goal now. It has real prizes too (as in Frontier will award Secret Santa stuff dependent on end tier reached). It looks like it will over by maybe Wednesday, but hard to tell.

As Santa’s we have to deliver Gold, Frankincense (Mineral Oil) and Myrrh (Pyrophyllite) goods to North Ring (Pole). You’ll need either something to mine with or something transporty with a decent range, as local spots are pretty much dry.

I’ve currently delivered 4,656 tonnes for a potential reward of about (best guess) 35 million, so the Blackbird would do the distances fast but struggle with the cargoes

Elite Dangerous is a bit of a grind, but these community events are more my style, in that they are drop-in and way to get enough cash that it’s fun to get a new ship to play around in with.

That sounds like a good reason to buy a Type-9

Yep. I’m doing this in a Type-7 but this is my cunning plan to be able to afford a Type-9 next. I once made a joke about Euro Truck Simulator being like watching paint dry, and here I am in the evenings sitting watching a timer go down to 7 seconds again and again for hours on end.