Mining in Elite Dangerous OR: Making Big Rocks Into Little Rocks For Fun and Profit

So, had a couple of people asking about mining in Elite Dangerous, so I figured I’d make a quick introduction and create a place to answer questions.

First things first- ships. For me, there are few finer ships than the Imperial Clipper for use as a miner- large cargo capacity for carrying large amounts of cargo and limpets, multiple internal modules for refinery, propector, and collector controllers, high speed and maneuverability for quickly and efficiently moving from rock to rock, and strong shields and multiple hardpoints to defend herself with.

First things first: loadout and outfitting. I could run two medium mining lasers instead of the single one, but I like having options when it comes to defending myself (even I get interdicted sometimes). Besides, one medium mining laser still strips rocks fast enough to keep the collector limpets busy, AND has the advantage of not completely draining the power capacitor while firing.

Next up: internal layout. At the minimum, you’re going to need the following:

A Refinery (turns chunks of rock into materials that are then converted into cargo cannisters).

Cargo Racks (gotta have somewhere to store the shinies after your refinery does the converting).

Optional, but pretty much mandatory:

Collector Limpet Controller (lets you use little disposable drones to collect the rocks and fly them into your cargo hatch. Otherwise, you have to do it manually- a very, VERY slow, tedious, dangerous process).

Prospector Limpet Controller (lets you fire a limpet at an asteroid you’re looking at mining, and will tell you the composition of what the rock is made of. In addition, since at least 1.4, there’s been a well-documented buff to the amount of material you can collect from a single asteroid).

Here’s what I’m running at the moment. 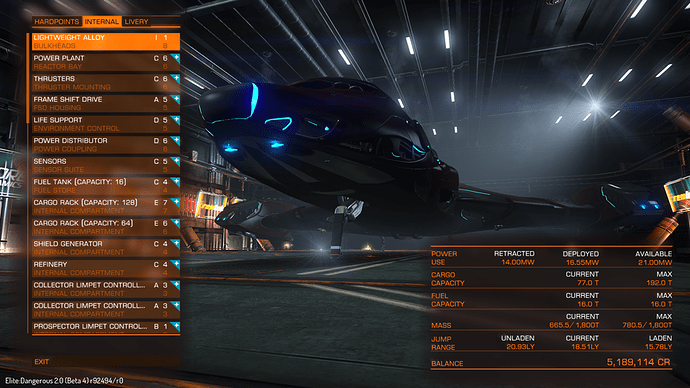 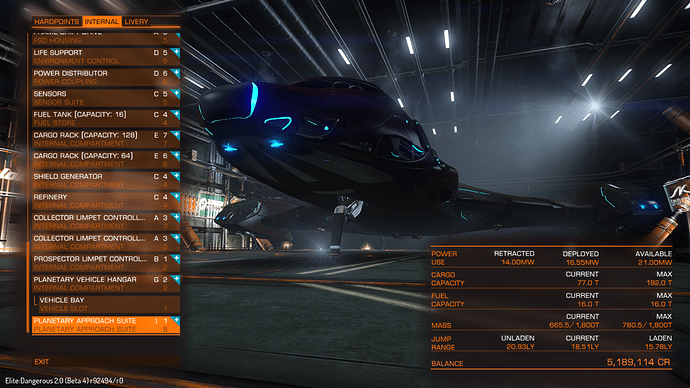 This refinery gives me seven bins, meaning I can collect the six most valuable materials (Gold, Silver, Platinum, Palladium, Osmium, and Painite) and one more common one- usually I go with Bertrandite, since it’s the most valuable ore per ton.

The twin Collector limpet controllers each can power two limpets simultaneously for up to 12 minutes. This is important, as the longer you can control them, the less frequently you have to launch new ones.

The Prospector controller I think has a range of about 3km, but I’m usually a lot closer to an asteroid when I launch anyway (since there’s no way to lock it up and determine how far away it is using sensors).

After loadout, the next important question is where to mine. Here’s my current favorite system for mining:

The first planet in the system has a Metallic ring, meaning it’s mostly made up of the most valuable metals. And the “Pristine Reserves” status means you’ll find them in much higher quantities than anywhere else.

OK, ship is outfitted, destination is set, two more things to do before leaving the station: restocking consumables, and checking for missions.

Those fancy limpet controllers we installed a bit earlier are completely useless without anything to control, so we’ll head to the restock screen to load up on limpets for the Collector and Prospector modules. I used to load my cargo bay between 1/4 and 1/3 full, but now with a prospector module installed, I’d say you can go ahead and max out if you like. I’m loading a lot fewer for this demonstration:

Finally, check the bulletin board for mining missions before you leave the station. Often you can make over 100,000/ ton of whatever mineral or metal the mission givers are asking for. Today, not so much- probably because I’m not highly allied enough with the controlling factions in this system. Still, it’s better than nothing, and slightly above market value:

Oh man…this is going to be a morning coffee cup read…! Excellent! 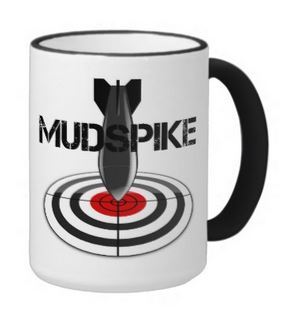 Yep - was looking forward to this one - thanks @Navynuke99

@Navynuke99 thanks man. I died twice to superior interdiction and rage quit. Quite enjoyable guide though.

I died twice to superior interdiction

Solo or open play? I’ve been curious about joining one of the huge carebear groups like Mobius, where it seems it’s still social but no player vs player stuff unless in a combat zone? I know people like to say ‘I’m a pirate, I’m roleplaying’ but it’s not a freepass to go around just killing people imho.

Solo play. Open play tends to boot me to the menu every time I leave a frameshift jump

I like having options when it comes to defending myself (even I get interdicted sometimes).

Does this mean you shoot first, too?

Excellent writeup, @Navynuke99! Very much looking forward to the follow-on.

I have kept a keen eye on Elite Dangerous but haven’t actually bought a copy … just yet.

If at first you rage quit, calm down and try again.

And continuing! Most every resource-rich ring in inhabited space will have several resource extraction sites (RES’s) with varying levels of NPC pirates (and most likely player bounty hunters) within. While there are constant discussions back and forth about whether or not yields are higher in hazardous resource extraction sites, I’ve never found it worth the constant threat and harrassment. In the picture below, the RES’s are all visible as the targets in the rings. I’m aiming for the day side of the planet, outside of one of the RES areas.

Once you choose a spot of entry, it’s time to get in close. To get into the ring among the rocks, just aim. When you get close, reduce speed. The Supercruise drive will pull you out automatically when you’re close. The important thing to remember is to reduce your speed to less than 1 Million meters/ second to avoid taking damage: 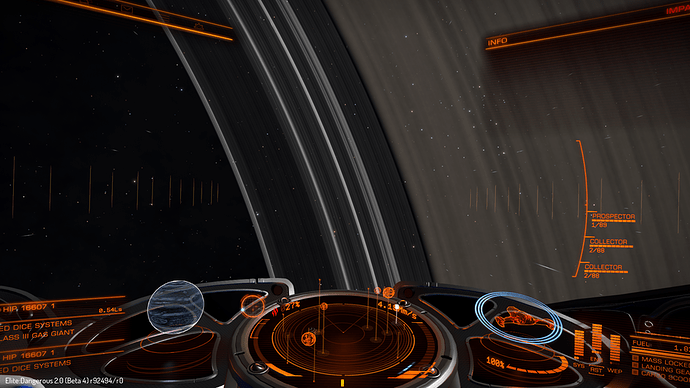 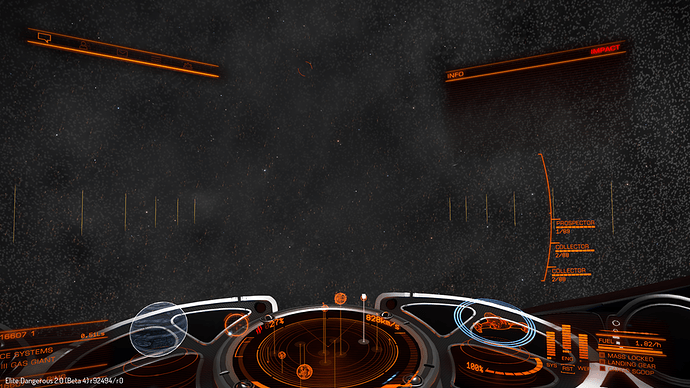 Now, time to get to work! Chose an asteroid right in front, and have fired a prospector limpet at it. As soon as it attaches, we’ll get a breakdown of what the rock is made of:

Jackpot! Not a bad way to start this session off.

Now, to get a bit closer, fire the mining laser, and start deploying collectors to pick up the chunks of gold for me: 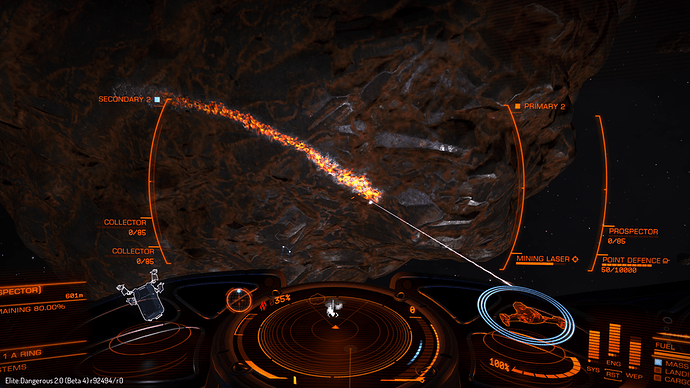 And here we can see the refinery in action:

A very good haul for the first asteroid. Definitely a huge buff with the prospector:

On to the next rock! Not as lucrative as the last one, but I’ll still turn a profit off the Palladium. 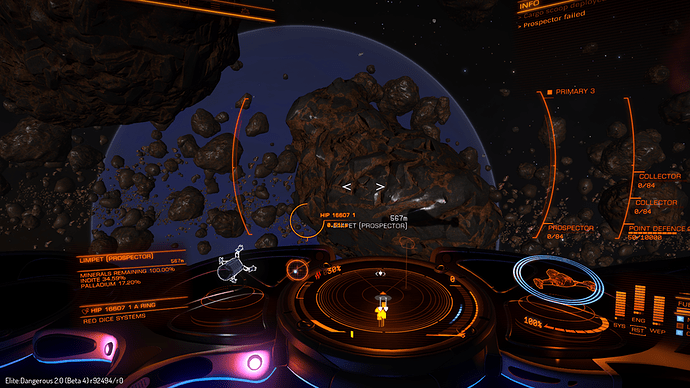 Because the rock is also made of Indite, which I’m not planning on keeping, I’ll have to manually manage the refinery and vent any Indite that comes in:

On to another rock, this one bearing the holy grail of mining materials, Painite. This stuff goes for over 30,000 credits a ton, and with available missions, can easily pay out over 200,000 credits. 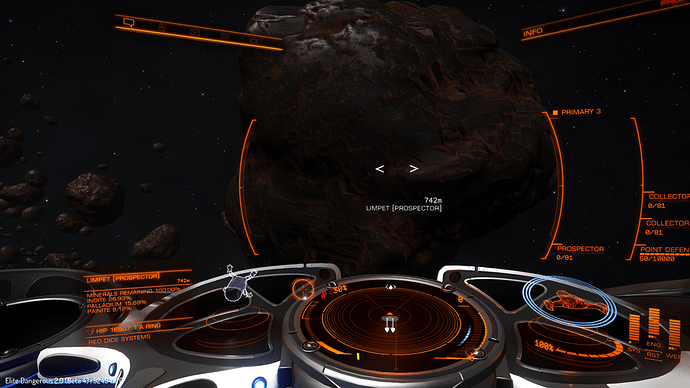 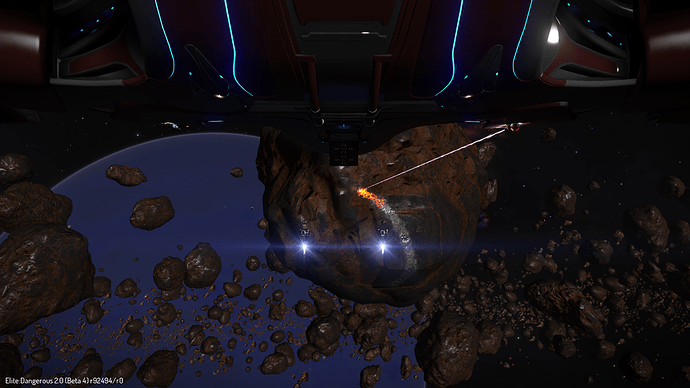 And the results of a few asteroids worth of mining:

Time to head back to port and cash in on the profits. Looking at the navigation tab, here’s a bit of a preview of all the various planetary stations that will be available when Horizons officially drops in a few days: 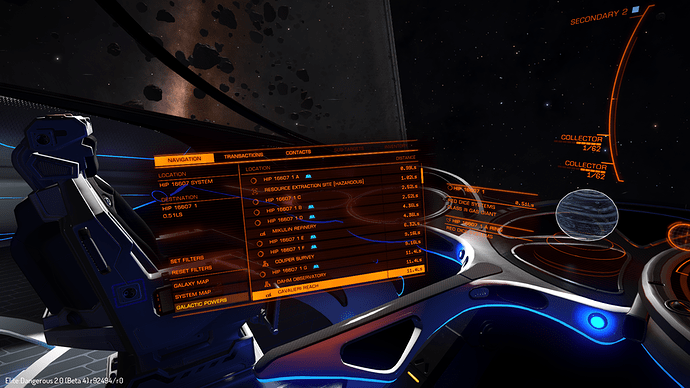 That’s it for now. Any other questions, feel free to post them up! Also, there’s a pretty active little community of us over at SimHQ- you can find a lot more information there.