I once posted this in a PM for us Hollo Pointe flyers to pass data to Hornets for LGB deployment. With the JDAM out, it’s time to share and update it! This should help with those wishing to do recon & Strike with mixed airframes, or even CA.

A quick lesson for coordinate adjustment in flight for laser guided bomb deployment with a target point in the Hornet.

Since we cannot yet use MGRS coordinates in the Hornet, Long/Lat worked well but requires some conversion.

There are two common ways to show long/lat in DCS and I will show the same location here:

Doing basic math from @Dark_Star or @Franze’s TGP readout got me within 1% on my HSI.

So take a TGP decimal readout of say 87, and multiply that by 60:

And reversed by the hornet’s flight computer:

Now I haven’t definitively tested it, but the Hornet may round to 87 or truncate at 86. Worst case it’s off by 1% which is acceptable a laser guided bomb to still find the laser. For JDAMs, I’ll have to experiment. 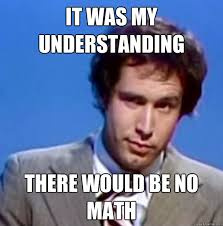 I guess it’s a bit late to ask Boeing for a calculator MFD page? Or did they expect all pilots to carry smart phones - but then, where’s the USB port?!

That’s what your E6B flight computer is for, isn’t it?

Or did they expect all pilots to carry smart phones

Or a targeting pod.

TGP will be our (Hornet pilots) collective Christmas gift from ED. So we all have to be good this year:

If everyone is really good we can bargain for a JSOW birthday present…if we can decide when that is.

Sort of missed this before, but I need to watch this:

I plan to use this concept to hit runways. No more wind-drifting iron bombs!

you mean you don’t use the “I’m at 200ft, full throttle looking like my ass is on fire then dropping a full load of mk82 snake eyes” technique that always ends up with me in a crater, but looks cool while i am doing it.

Only in the Harrier!
Then I use ripple ccip mode and calculate the release interval as: (runway length - 1000)/bomb qty = interval with the first release 500ft in.

As the Harrier has a TPOD, could we use that to find targets and then the coords/elevation passed to Hornet JDAMs, like some sort of really expensive flying JTAC?

I’m not sure if these in the AV8B end in seconds or decimals - anyone know? 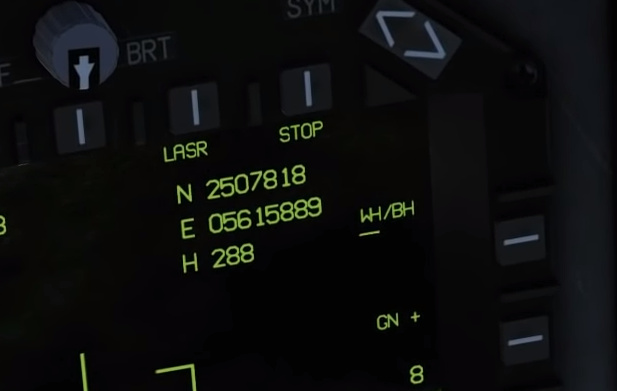 TGP readouts tend to be decimal, hence the extra digit.

(note the final digits are too large for seconds, which maxes out at 60)
Also note that longitude precedes with 0 to make a 3 digit degree indication as it ranges from 0 to 180, unlike latitude which is limited to 90 degrees.

As far as the hornet is concerned (currently - Wags mentioned precision mode comes later) you can round off the last number, as the Hornet cannot make use of it.

A correct Hornet UFC entry would be:

Some current limitations (subject to change with updates):

Multi release is technically viable despite the bug with the JDAM QTY option and selected weapon station needing to be set the same.

Not a fun button mashing procedure, but it works.

Without terminal settings (not yet implemented) the impact angle is proportional to release range. The further you drop, the closer to horizontal the impact. If you are aiming for a bridge, pickle late.

As for range, wait a good 5 seconds at least (more if you are higher/further) as a pickle at max range will almost certainly fall well short of the target (and touch down almost horizontally).

Cycling between JDAM models on the STORES page, or deactivating and reactivating the JDAM in any other fashion - resets the alignment countdown.

I really enjoyed the JDAM’ing tonight. Really looking forward to precision mode, although for airfields and the like it seems to be working nicely. The GBU-31’s seem to help the inaccuracy, as they make a boom, while the 38’s just a plink.

Interesting and informational setting up the JDAMs in the cockpit.

However, it has been my experience that the DMPIs are “dropped” in CVIC and programed into the Hornet’s brick before the pilot walks to the aircraft.

One of the “issues” we faced with developing an afloat PGM targeting systems (mid 1990s when I was at CNAL) was that at the end of the process, we didn’t want end up having the target’s geocorrds handwritten on a yellow sticky that the aviator would then punch in once in the cockpit…ripe for a fat-finger mistakes and for of defeats the purpose of buying multi-million $ equipment and intensely training IS’s. Yes, there are some times we need to rapidly retarget in flight…but that’s supposed to be the exception, not the rule. (Yes the CAS we’ve been doing in the GWOT has blurred that line a bit.)

So…is there some type of way to enter the DMPIs via the ME?

Not as of yet. Wags mentioned they will be adding a data card, and you can do it there. However that’s still a pilot specific thing, not sure if any of those settings can also be done via ME - guess we’ll find out when that’s ready.

Looks like the JDAM arc seconds extra values are in there, but it’s awaiting the output figures being added in the mission editor and F10 map lat/lng display. Cool.

Once we have AUTO Loft, plus pre-planned with arc seconds additional precision then it’s going to be interesting flinging these across the map. Even on manual mode last night I was surprised we got to the edge of the SA-11 envelope but still scored kills. Plus that runway suppression worked really well too.

ripe for a fat-finger mistakes

We know it was usually done with the data cartridge, but it was funny how I was paranoid about entering in manual figures like that for JDAM targeting while sat in the cockpit. I must have checked the values about five times at least, flipping between the map and the coords entered. It could really ruin someones day in downtown Batumi with a couple of GBU-31’s misplaced with a 42 vs 24…

I was running the intel watch at HQ EUCOM when we hit the Chinese Embassy in Belgrade during Allied Force…it wasn’t a fat finger mistake, but it was a mistake in the targeting process…and it was quite unpleasant for those of us “in the business”…years later, when I was running EUCOM’s targeting shop, it was always in the back of my mind.

Back to the sim world…

…the great thing about DCS World s that everything actually has an exact, precise, 3D geocoordinate already living in the system. It matters not (“es macht nichts” for @Aginor ) what the real world coordinates or what system you are using, if you zoom in and put you cursor on a spot in ME, it really, really, really should be the same spot the bomb will hit (+/- CEP) in the sim.